"It is high time the Pope Francis policy of inclusion and fighting for justice is top of the U.S. bishops’ agenda." 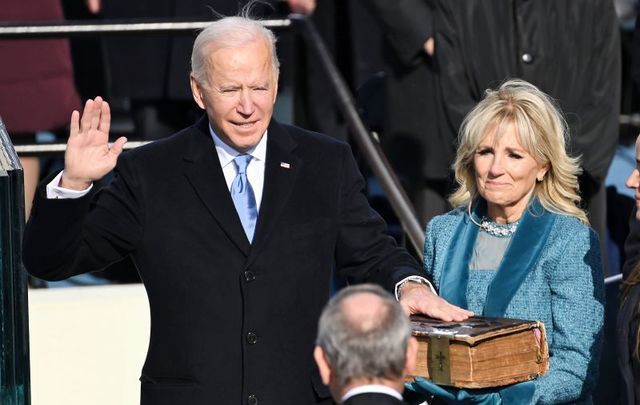 January 20, 2021: Joe Biden is sworn in as his wife Jill Biden holds the Bible during the 59th Presidential Inauguration at the U.S. Capitol in Washington, DC Getty Images

The U.S. Conference of Catholic Bishops, through its chairman Archbishop Jose Gomez of Los Angeles, issued a hardline statement on President Joe Biden when he was inaugurated last month.

The crux of the matter was in the following paragraph: “I must point out that our new president has pledged to pursue certain policies that would advance moral evils and threaten human life and dignity, most seriously in the areas of abortion, contraception, marriage, and gender.”

There was not a mention in Gomez’s statement about what had happened on Capitol Hill just days before, no acknowledgment of the violence that left six dead and many injured, no mention of the moral dilemma of a president encouraging violence and confrontation as far removed from the Gospel stories as chalk from cheese.

Instead, the august body in the name of Archbishop Gomez came down on the hoary old chestnuts of gay marriage, gender issues, contraception (now there’s a cardinal sin committed by billions on this earth -- wonder how they police it), and abortion.

The statement was so poor that two cardinals, Sean O’Malley in Boston and Blaise Cupich in Chicago, issued their own remarks in a far more conciliatory tone.

Cupich replied on Twitter, rejecting this “ill-considered statement on the day of President Biden’s inauguration” and stating “there is seemingly no precedent” for this action by Gomez.

O’Malley’s statement covered the obvious, that Biden has vowed to help America heal from the pandemic. “We pray that the president and vice president enact policies that provide care for the forgotten and vulnerable, heal our nation from this deadly pandemic, welcome the immigrant, provide economic justice and opportunity for all, work to end systemic racism, and promote peace across our country and throughout the world,” O’Malley said.

Cupich was asked to go to Rome where Pope Francis met him in a very public setting and got a major briefing on events in the United States. The signal from the Vatican and this pope was clear -- the way forward was cooperating with Biden where possible, not confrontation.

The differences between how the two wings of the church in America are clearly delineated in their response to the election of the first Catholic since John F. Kennedy in ways they reflect the views of the former Pope Benedict who is conservative in ideology, while Francis is much more comfortable as pastor and parish priest.

The right-wingers include New York’s Cardinal Timothy Dolan who was close personally to Trump and even blessed the Republican convention.

It should be without question that Biden is the most religious of men partially because of his own personal tragedies. Having an Irish Catholic as president committed to more humane immigration policies and lessening the burden of the poor should be a powerful incentive for the Catholic Church to work with Biden.

Instead, we have a fault line outlined by Archbishop Gomez where he considers contraception banning a more significant church policy than immigration or feeding the needy.

It is high time the Pope Francis policy of inclusion and fighting for justice is top of the U.S. bishops’ agenda. Archbishop Gomez has certainly sent the wrong message.

*Editor's Note: This editorial first appeared in the February 3 edition of the Irish Voice newspaper, sister publication to IrishCentral.