Why did Cardinal Dolan side with Trump by blessing Republican National Convention?

With his blessing of the 2020 Republican National Convention, Cardinal Dolan joined President Trump "in an unholy alliance." 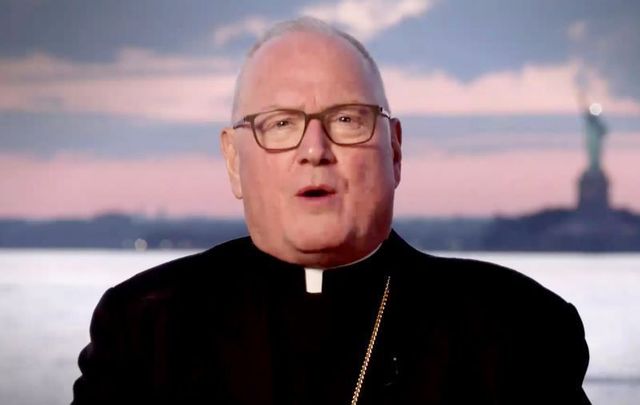 Cardinal Timothy Dolan, the Archbishop of New York, delivered an opening prayer on the first night of the 2020 Republican Convention on Monday, August 24.  By so doing he made clear his preference for the GOP and mixed his religion with politics

Unlike Dolan, John F. Kennedy drew a line in the sand when running for president in 1960.

There were widespread charges that Kennedy would take orders from the Vatican, a hardline anti-Catholic trope. As the first Irish Catholic President, he was under a religious microscope from the very start.

Kennedy responded by making his respect for the separation of church and state evident when he said, "I do not speak for the church on public matters -- and the church does not speak for me.”

Someone should have read JFK’s message to Cardinal Timothy Dolan, the Archbishop of New York, as he cheered for Trump's presidential campaign by opening the Republican National Convention with a prayer on Monday, August 24.

Church and state, Dolan and Trump, were joined in an unholy alliance that must have made Pope Francis visibly wilt.

The sight of one of his renowned cardinals signing up for duty with the likes of Donald Trump, who stands for pretty much everything the pope opposes, must have shocked the pontiff.

In an opinion piece for CNN, former Augustinian Catholic priest Brian Frawley wrote: “.. Dolan should understand the power of his presence at the convention and be mindful that this gesture will be seen by many as an affirmation of the President.”

Frawley is right. Dolan had chosen sides in a political race he had no business interfering in. True, he spoke to the Democratic National Convention in 2012, but he also spoke at the Republican gathering that year.

Besides, the mortal battle for the soul of America was not evident in 2012. In 2020, Trump has deliberately set Americans against one another, utilizing racist dog whistles and outright racism.

With so much on the line, not least Trump’s hinting that he might not readily accept the result on November 3rd, Dolan was stepping into a highly charged stand-off and taking sides.

The clear undertone was to vote for Trump, an extraordinary position for a cardinal charged with caring for all his flock, not just those who vote Republican. One wonders what Joe Biden, a committed Catholic, made of the thumb on the scale placed by Dolan.

In terms of Catholic doctrine, it was truly startling to see Dolan shill so shamelessly for Trump, the three-times-married, accused sexual predator, flim-flam business operator with multiple bankruptcies, and jailer of innocent little children at the Texas and Arizona border.

It was incredible to see Dolan standing there under the Statue of Liberty defending the most anti-immigrant president in recent history.

Dolan also snubbed the African American community, his very presence legitimizing the president who excused the neo-Nazis who marched and killed a woman in Charlottesville three years ago, which afterward, Trump said there were “very fine people on both sides.”

I wonder would Dolan agrees with that sentiment, certainly, he seems to have excused it which makes him just as culpable.

Dolan has stated his presence did not constitute an endorsement of President Trump which would match any of the porkies Trump has told. Dolan has done his own reputation enormous damage, a cardinal who chooses a man who prefers conflict to one who seeks to bring people together. He has chosen the exact opposite of the Christian message. Perhaps it is time he retired.

You can watch Cardinal Dolan's opening prayer for the 2020 Republican National Convention from August 24 here: