"The president refused to specifically condemn the white supremacists. Should we be surprised?" 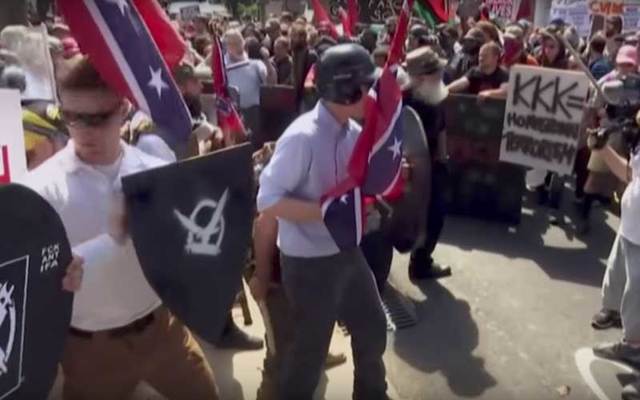 In hindsight, we must admit: we all saw it coming. Silence is the enemy of a healthy democracy. The drumbeat began, and it just grew more intense.

*There was Trump's early failure to disavow the support of Nazi David Duke in the campaign.
*His classification of all new American immigrants as rapists and murderers.
*His claim that an American judge from Indiana couldn't preside over his case "because he's a Mexican."
*His thinly veiled assassination call to "Second Amendment people" to "take care of" Hillary Clinton.
*His call to supporters to "rough up" protesters at his campaign events.
*His very recent address to national law enforcement officers to increase their use of force -- justified or not.

Is this the final conflict that Stephen Bannon has longed for? Will any President before or after Trump have a senior advisor that the mainstream press factually and routinely refers to as a "white supremacist"?

Yesterday, Americans died and were badly injured in America -- standing up to white racism and white fascism. A young woman was killed when struck by an alt right racist's car.Two state troopers died aboard a helicopter that crashed as they were doing their job protecting the public. The two, sadly, go together in this chapter of the American experiment. The president refused to specifically condemn the white supremacists. Should we be surprised?

The place was Charlottesville, Virginia -- Monticello, the University of Virginia, and the final resting place of Thomas Jefferson, author of the Declaration of Independence.

The lead from The Washington Post is the sort of thing many of us -- as Americans -- thought we would never see in America.

"CHARLOTTESVILLE — Chaos and violence turned to tragedy Saturday as hundreds of white nationalists, neo-Nazis and Ku Klux Klan members — planning to stage what they described as their largest rally in decades to “take America back” — clashed with counter protesters in the streets and a car plowed into crowds, leaving one person dead and 19 others injured."

The scene was more reminiscent of Germany's infamous Kristallnacht than of Thomas Jefferson's Charlottesville.

Ku Klux Klan leader David Duke -- a long time Trump supporter in good-standing -- called the day of violence and murder a "turning point" for the cause of taking back America for white people.

The Daily Stormer the Nazi newspaper had high praise for Trump’s “violence on all sides” remarks. They wrote:

“He (Trump) outright refused to disavow.
People saying he cucked are shills and kikes.
He did the opposite of cuck.
He refused to even mention anything to do with us.
When reporters were screaming at him about White Nationalism he just walked out of the room."

This is a turning point indeed -- A Nazi paper praises the president. Perhaps this was the day Americans woke to the truth that we are not so much better than the German people of the 1930's. Perhaps this is the day that so many Americans who voted for Trump hoping for change, can now realize that we have made a horrible mistake.

Perhaps, in humble reflection, we can look back upon the progression of toxic, hate-filled language. Perhaps we can now understand that what many of us heard as hate, others -- who share our country -- heard as permission.

What many of us dismissed as "politics", others heard as a call to violent action.

None of us -- as Americans -- can claim to be oblivious to the political language and political victories that have led us to this moment. We are all responsible. It was a long time yesterday before the Twitter-happy President of the United States put out a milquetoast statement condemning the violence.

His tweet was quickly and directly answered by Ku Klux Klan leader, David Duke. “I would recommend you take a good look in the mirror & remember it was White Americans who put you in the presidency, not radical leftists,” he wrote.

Trump later amended his tweet to condemn "the violence on many sides."

As the Washington Post reported, "Dozens of the white nationalists in Charlottesville were wearing red Make America Great Again hats. Asked by a reporter in New Jersey whether he wanted the support of white nationalists, Trump did not respond."

My father flew 33 missions In WWII over Japan in a B-24 Liberator. All of his grandparents were immigrant people. Some of them were illiterate. Most of them didn't speak English as their first language, they spoke Irish. They didn't risk all to come to America because they thought it was white. In fact, at the time, they didn't consider themselves, "white."

They came to America as the Land of Opportunity. A country -- unlike any other -- with Liberty and Justice for All.

My dad and his generation fought and won the Second World War against fascism. They fought against a brutal racist definition of human dignity. They liberated racist death camps. They made America safe for their children and grandchildren, or so they thought.

This morning I had to explain to my fourteen-year-old boy what American Nazi's had done in Charlottesville, Virginia. And why they were allowed to do it. Today, I also had to scrape my nineteen-year-old boy from the ceiling. He, like lots of good-natured young men and women in America, want to do something to fight against what is becoming of their country.

In a particularly low point of the Civil Rights struggle in the U.S., Dr. Martin Luther King was asked by one of his lieutenants how he ever hoped to change the minds of the most entrenched white supremacists who were arrayed against him. Well aware of the physical danger, King replied: "we just gotta love the hell out of them...."

He died. The martyrs of Charlottesville died. Many more may die.

But love will have the final word.

P.S. To my good friends at the Jewish Anti-Defamation League who are now inclined to admonish me against using the words, "Germany", "Nazi", or "fascist", in an American political context, I say -- too late. Tell Jared Kushner. Better yet tell the families of the Americans killed by Nazi's in Charlottesville.

Martin O’Malley was Mayor of Baltimore, Governor of Maryland and ran for the Democratic nomination for president in 2016