First of all, we should note how proud we are that it is an Irish American, Joe Finnegan Biden, whose Irish ancestors came to America on Famine ships, who the people have chosen to lead the United States. 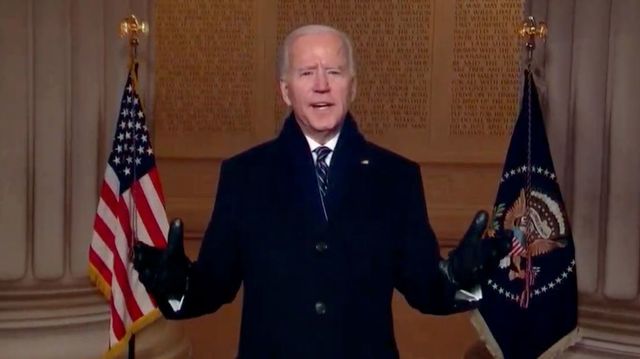 President Joe Biden, addressing the world on his inauguration day as part of the "Celebrating America" program. Getty

With the exception of Harry Truman, who inherited World War II when assuming office after FDR died, no one has come to the U.S. presidency in modern times with as many catastrophes occurring and problems abounding as Joe Biden.

All the current problems will come to rest on his slender shoulders, and he will have to have the strength of Atlas to hold the world together.  Not only that, but he takes office after the worst president in U.S. history has done his worst.

The problems are myriad.  A rogue president stirred up the street mob which came close to hanging key politicians including Vice President Mike Pence and House Speaker Nancy Pelosi.  Incredible to write such a sentence, but nevertheless true.

The old president has been impeached, but time is valuable and Biden must balance the first priority, the pandemic, above all else, including the impeachment.

Meanwhile, the pandemic is expected to take 500,000 U.S. lives by March and it continues to rage as scientists, medical personnel, political leaders and top bureaucrats try desperately to halt its’ deadly onward march.

If that is not enough, there is a level of unemployment higher than at any time since the Great Depression.  Millions of businesses have been shuttered, many forever.

Food availability is no longer guaranteed and millions go hungry. The human cost is heartbreaking,

Into the gap steps the giant slayer President Biden, who destroyed Donald Trump by almost eight million votes in the election, thereby saving the country from complete Armageddon which would have occurred in a second Trump term.

But Biden will hardly have time to tuck his feet under the resolute desk in the Oval Office before the challenges begin to mount.

He does have arrows in his quiver.  He knows how to wield the machines of governance after a lifetime in service unlike his predecessor, a penny-ante reality show carnival barker.

Already the steps Biden has announced to tackle the virus seem so obvious that you realize the sheer incompetence of the previous regime in not instituting them.

As The New York Times pointed out, what is needed is to “Loosen the restrictions on who can get vaccinated (and when). Set up many more sites where vaccinations can take place.  Mobilize more medical personnel to deliver the vaccinations. And use the might of the federal government to increase the vaccine supply...”

Such steps would see the pandemic, at last, slowed and eventually eliminated. That will quickly provide a much-needed jolt for the economy, which will be helped in the between time by a massive $1.9 trillion stimulus package.

Infrastructure must be rebuilt and jobs created. The example of how the Covid-19 vaccine was developed at warp speed should drive us now. American ingenuity can be a tremendous force for good when unleashed.

Biden must also demand no quarter from those right-wing militia who, encouraged by Trump and enabled by right-wing media, tried to bring down the legitimate election result of 2020.  They must be infiltrated and defeated.

We say the same for Joe Biden, our 46th president, as he embarks alongside the new Vice President Kamala Harris on their onerous task. May they help heal our beloved country.