Almost 300,000 Americans have died from the coronavirus this year. 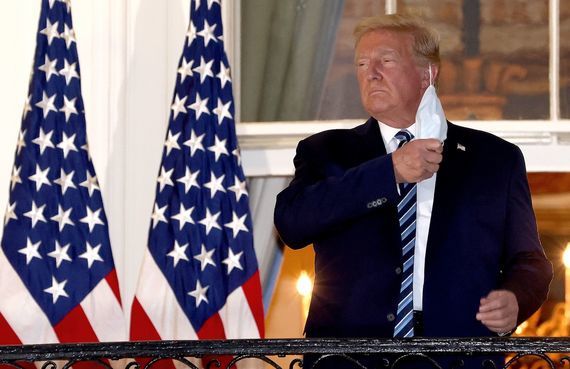 Donald Trump has claimed that the United States is turning the corner in the fight against COVID-19. Getty

The sight of the president of the United States cavorting around Georgia on Saturday at a time when the pandemic has become the greatest public health threat in recent American history was truly shocking.

*Editor's Note: This editorial first appeared in the December 9 edition of the Irish Voice newspaper, sister publication to IrishCentral.

What was the president doing in Georgia? Seeking to undermine democracy by amending the verdict of the voters of that state who chose Joe Biden to be the next president.

He was asking the ballot outcome be overturned on the basis of a Mad Hatter series of ridiculous assertions made by cranks and conspiracy theorists, claiming that the seven million ballots countrywide which ended up as Biden’s margin in the popular vote somehow should be made null and void. They have been literally laughed out of court.

An alien dropping in from outer space would have assumed that this wrecking ball approach to the American election and democracy was the major story of the hour, but they would have been wrong.

The upward swing of the graph of the dead from the coronavirus has been a truly horrifying development, likely surpassing the spring wave of deaths that shocked us to our foundations.

With 300,000 Americans soon to be dead thanks to Covid, and who knows how many countless others sick, you would think all the President's efforts would be focused on remediating the situation.

Not at all. He barely spent three minutes on the topic at his Georgia “rally,” and no precautions were taken by organizers to ensure social distancing or honoring the obligation to wear masks.  Trump even lied about the upcoming vaccine, claiming he was responsible for it.

In fact, the Pfizer vaccine was created in Germany by two Muslim Turkish scientists (they would not have been admitted to the U.S. if Trump’s Muslim bad had been enforced) and Pfizer paid the manufacturing costs upfront, so Trump can claim no victory there.

What he can claim is the most hideous and damaging performance by an American president since Herbert Hoover somnambulated into the Great Depression.

Back then Hoover echoed Trump's statements that all was fine and no need to panic until the day the stock market crashed.

Trump’s fallback position is that the fight against the virus is rounding the turn. This must be the longest turn in history as we seem to be stuck in the same lane for three months now.

Trump has ensured his place in the history books as the Nero of the pandemic, strumming his lyre while hundreds of thousands die needlessly.

Worse than Nero, Trump has blood on his hands. His bully pulpit has been used to deny, even ridicule the dangerous nature of the virus.

His policies have ensured he will be remembered for his refusal to urge citizens to social distance and wear a mask on the entirely ridiculous grounds that both had minimal impact.

The continuing behavior of the media, covering Trump as spectacle as opposed to would-be dictator and grossly incompetent leader, continues to grate.

Several cable channels covered the entirety of the 93-minute fatuous self-defense speech in Georgia showing just how much more they are drawn to spectacle and not substance.

The Roman poet Juvenal once stated that all that was needed to keep the masses happy was “bread and circuses.”

Trump and his deluded sycophants, including America’s newest most famous Covid patient, Rudy Giuliani, are more than willing to play along.