Flight landed in Belfast to a water cannon salute and employees waving the Star Spangled Banner. 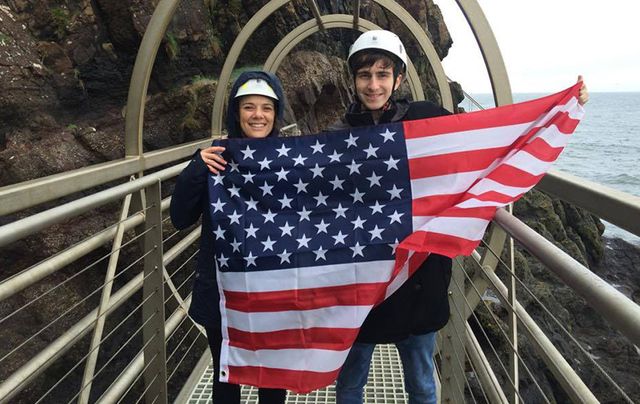 Antrim: I’m in Northern Ireland this week thanks to the generosity and kindness of Tourism Ireland and Norwegian Air.

This is a corner of Ireland that I don’t know well, really only through books, the tales of friends and the odd film.

I’ve passed through to get to Donegal a few times and I once spent an afternoon in Belfast but that’s it until now.

Norwegian Air’s virgin flight from the United States to Belfast was welcomed into the airport with a water cannon salute – an honor I remember Donald Trump received when he first arrived as President-Elect in Washington. If anyone ever tells you America is losing its importance in the world, think again. Belfast had been without a direct flight to the US for months and we were greeted by cheering employees waving the Star Spangled Banner. 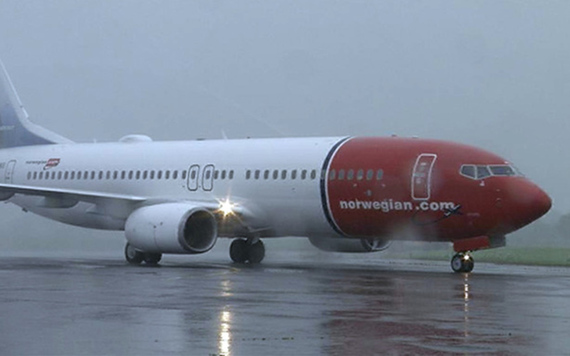 The flight itself from Providence is a convenient one for anyone in the northeast. Not only is it affordable, but it leaves at 9.30pm, so you can snooze on the flight over and wake up in sunny (or rainy) Ulster first thing in the morning.

Upon arrival I decide to play a little game with myself: will I find Northern Ireland more like the Republic of Ireland I recently left to live in America, or will I find it more like the Britain I was born in?

The first destination on our trip easily falls into the second category: Glenarm Castle outside the town of Larne has been home to the Earls of Antrim for centuries and is managed by the 9th Earl’s son, Lord Dunluce.

With 14 rooms, the Castle’s walls are adorned with the portraits of blue-blooded ancestors, most notably Churchill’s grandmother, and its tables burst with photographs that span a century.

You could never doubt that it's a stately home: but the couch looks like kids have regularly thrown themselves onto it and there’s a pack of playing cards on the table just as there would be at my own gran’s house.

Lord and Lady Dunluce, their butler George tells us, work in London but whenever the children aren’t in school they phone to tell him they’re “coming home.” Landed gentry they might be, but that’s a phrase any Irish family in Britain will excitedly use the night before their flight or ferry west. 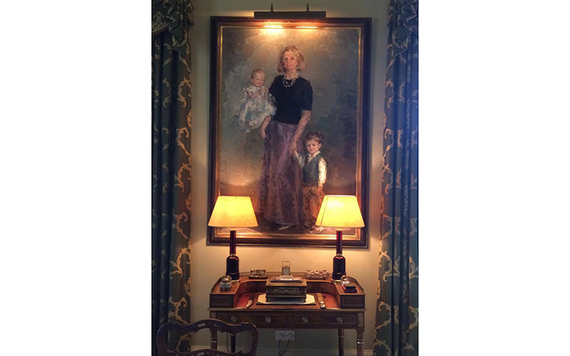 Portrait of Lady Dunluce and her two children.

The castle is used as a wedding venue when the family is in England. There’s a cafe and they host concerts throughout the summer months – country music star Nathan Carter is making an appearance in nine days. It’s doesn’t get more Irish than that.

Afterwards we thread our way along the coastline south to Islandmagee, home to the Gobbins Cliff Path. This coastal walkway was once more popular than the neighboring Giant’s Causeway with views spanning from County Down in the south to Scotland in the north.

Home to jagged cliffs, caves, wildlife and crashing waves, I can see why we’ve all been given hard helmets and hiking boots to navigate along the path. 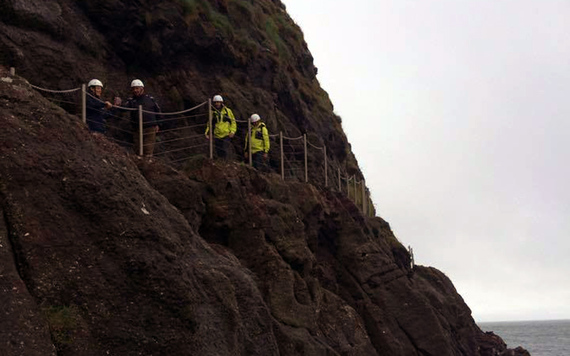 Like anywhere in Ireland, the area has its share of tales to tell about its tangled history with England. Back in the 16th Century this part of Ulster was so wealthy the English banned it from trading its cattle or textiles with the rest the world. The result was a vibrant smuggling trade that saw cows stashed in the cliffs for the Scots to collect and sail away with.

A few centuries later in 1788, as America fought for her independence, the USS Ranger severely damaged HMS Drake after the two ships found themselves sharing the same channel between Islandmagee and Galloway in Scotland.

But, that fraught history aside, the locals clearly seem to like the English now. Or at the very least one English lady. The center of the town of Larne is dominated by an unmissable golden Crown built in 2012 to celebrate Queen Elizabeth II’s 60th year on the throne.

And just in case you might have missed that folk around Larne tend to like the British connection, the lampposts and curbs of sidewalks are painted red, white and blue.

The Union Jack and the Ulster Banner also fly from homes and most other man-made structures.

To me, these overt displays of patriotism remind me of neither England nor the Republic but small towns I’ve visited in Upstate New York.

In America and Northern Ireland patriotism is rarely hidden, which is odd because America is the biggest most powerful nation in the world. Secession has not been an issue in the US since the end of the Civil War and the American military remains the greatest fighting force known to mankind. America should feel safe and secure in her nationhood. Few countries have it as good as the US of A.

By contrast, Northern Ireland is a society divided and a place where flags have been fought over for centuries. The siege mentality of so many unionists means their identity is worn on their sleeves out of fear it might be stolen or even forgotten by people.

But from my perfect hotel room at the Ballygally Castle on the edge of famous Causeway Coastal Route, I can see the waves of the Irish Sea crashing against the beach and I can smell the purest Irish air going.

There may be British flags flying down the road but I definitely feel I’m back in Ireland. And after months away, I’m very glad to be.

Read more: Did your hometown make the 20 most charming Irish towns list?