Norwegian Air transatlantic low-cost flights take off out of Ireland

With already 150,000 tickets sold and flights out of Cork and Shannon operational NAI is “here to stay”. 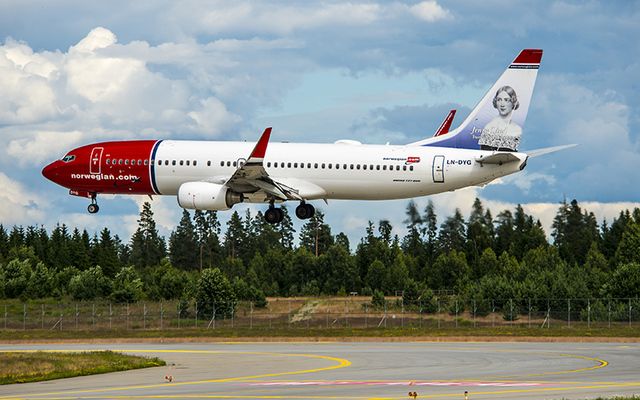 With already 150,000 tickets sold and flights out of Cork and Shannon operational NAI is “here to stay”.

The chief executive of Norwegian Air International (NAI), operating low-cost transatlantic flights out of Cork Airport in the southwest of Ireland, has said the company is “here to stay”.

Chief Executive Tore Jenssen was speaking at last Saturday (July 1) at the celebration of NAI’s inaugural flight from Cork to TF Green, in Providence, Rhone Island, just 90-minutes outside Boston.

“We have been waiting more than three years for this,” Jenssen said.

“We have been battling left, right and center for this and it’s fantastic to be in the Rebel county to launch the first service — it all makes sense to launch this out of Cork.”

Initially there had been a delay in NAI’s plans for their Irish route expansion due to an aircraft delivery delay. However, they are now using Boeing 737-800s on the new routes. The Irish Examiner reports that NAI took delivery of two 737-Max aircrafts on Saturday. They will receive another four aircraft over the next three weeks and introduce these on the new Irish routes.

Jenssen said that once they have been tested the NAI will make a decision on the proposed Cork to New York route. Previously concerns over the length of Cork’s run were perceived as being an issue.

Cork Airport’s Managing Director Niall MacCarthy praised all those, on both sides of the Atlantic, who had made successful the campaign to secure NAI’s license.

He said “I am proud to say that we are Ireland’s and Europe’s newest transatlantic airport.”

Read more: What new US "enhanced security measures" will mean for Irish travelers

Simon Coveney, the newly appointed Foreign Affairs Minister said Saturday and the celebration of NAI’s inaugural flight out of Cork was a particularly great day for the airport, which is now part of the transatlantic story.

Coveney said “Now that it is part of that mix, we may well see other airlines looking at Cork because Norwegian have shown the way.

“This is going to be a very successful route. Many were skeptical at the start but the combination of the ambition of Norwegian Air, and the determination of management here at the airport to put a package together to make the business case, means people here have a fantastic new option at competitive cost to travel to the US.”

The Minister also added that while pre-clearance immigration facilities at Cork, similar to those in Dublin, would be helpful he commented on the efficiency of those services in Providence.

The new flights out of Cork Airport will also boost the area’s tourism. More than 1,000 new hotel rooms are being planned in Cork city to accommodate the expected tourism boom.

In Shannon the Norwegian Air’s service took off to a more rocky start, after a technical problem with one of their aircrafts meant the cancellation of a flight. Passengers were accommodated in hotels before being transported to Belfast and Cork airports to continue their journey’s to the US.

The Clare Herald reports that flight D-81825 was grounded at Shannon with a technical problem.

An NAI spokesperson said: “We are extremely sorry that due to an aircraft technical issue, the planned flight from Shannon to Providence on Monday 3rd July was cancelled.”

“We would like to sincerely apologize again to passengers for the inconvenience caused,” the spokesperson added.