New video footage of Donegal shows where the reincarnation of the ancient Irish version of the Olympic Games will be held this summer. 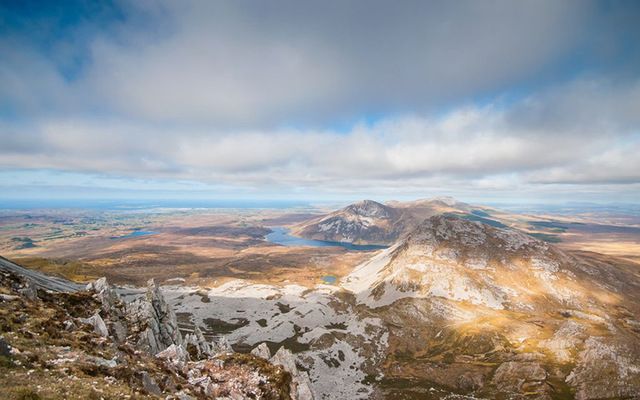 The incredible beauty of the Co. Donegal Gaeltacht region of Gaoth Dobhair was recently captured in this stunning drone footage that shows off some of the best beaches and walking spots along the tip of the Wild Atlantic Way.

Among the sights captured are Machaire Gathlán, Machaire Rabhartaigh, and Mount Earagail, some of which will form the backdrop of this summer’s Aonach Tailteann (the Tailteann Games), a reboot of  a series of ancient Irish games thought to be the predecessor to the Greek Olympic Games.

Created as part of Aonach Tailteann’s promotional content, the video highlights the spots where over 30 competitions for people young and old will bring together the Gaeltacht regions and pay homage to the traditional games while promoting the Irish language and the sports, arts, and traditions of the Gaeltacht.

Some have claimed that the Tailteann Games in ancient Ireland were the predecessors of the Olympics, which are thought to have started as early as 700 BC. The date of the founding of the Tailteann Games is the subject of debate, but most modern folklore experts believe them to have begun around 1600 BC.

Sometimes known as the Lughnasa games as they traditionally reached their pinnacle on August 1, the modern resurrection will see Aonach Tailteann transformed into a matter of pride between the Gaeltacht regions, pinning contestants against each other within their locality before finals take place in Connemara at the end of August.

Included among the sports competitions will be sea swimming, long jump, sprints, Gaelic wrestling, javelin and hurdle, while sean-nós singing, recitation, sketches and a short story competition will be included, among others, in the arts competitions.

A tribute to the goddess Tailtiu, the original games were instituted by Lú (Lugh, member of the Tuatha Dé Danann), who wished to honor the death of his foster mother with a celebration of Irish culture and strength, holding the first mourning ceremony with her funeral. Lugh was an Irish God, often known as the Long-Armed Master of the Arts and people often mistake the celebration of the games as a tribute to him instead of to Tailtiu.

The Goddess Tailtiu was the wife of Eochaid mac Eirc, last of the Fir Bolg High Kings, and the beloved foster mother of Lugh. Tailtu was linked with fertility and harvesting. Some say she died while clearing pastures for agriculture and, so, Lugh organized the harvest festival in her honor, at the time of the year traditionally known for bringing in the harvest.

With the first annual games kicking off with the local rounds in Cois Farraige and Gaoth Dobhair on Saturday, August 5, finalists will compete against each other in Connemara on August 26.