The division of the island is on the front burner again as many nationalists and republicans demand a border poll as allowed in the Good Friday Agreement. 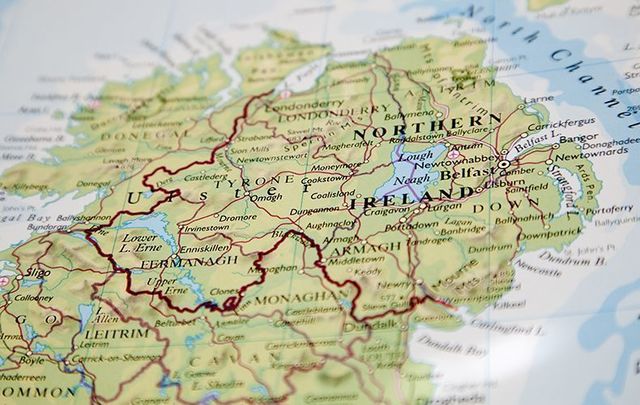 How Ireland's partition came to be and why it's a hot topic in recent times. Getty Images

The Home Rule Bill that was passed in Westminster in 1912 mandated a parliament in Dublin with jurisdiction over the whole island. It was a rather weak bill but was welcomed as an important step forward by Irish nationalists.

Over 100,000 cheering supporters welcomed John Redmond, leader of the Irish Parliamentary Party (IPP), back to Dublin after his success. Reversing the Act of Union where Daniel O’Connell and Charles Parnell failed was indeed a historic feat.

Patrick Pearse, the leader of the Easter rebellion a few years later, hailed it as real progress, but he issued a prescient warning that all hell would break loose if Britain reneged on its promises.

Meanwhile, in Belfast, the Protestant community led by Edward Carson and James Craig reacted negatively to the new bill. It specified the establishment of a unitary government in Dublin where, as they saw it, loyalists would be in a permanent minority.

For them, Home Rule equaled Rome Rule. So they declared their fierce opposition to being governed by papists who were seen as the perennial enemy of their culture.

By 1914, when the Home Rule Bill was finally to become law, the First World War erupted and Redmond agreed to postpone implementation of the bill until the war ended. Redmond, the accepted leader of Irish nationalism, also had to face the Ulster question.

What could a nationalist statesman offer to a strong rump of Protestants, predominantly living in one area of the island, who were adamant that they would have no part of Dublin rule?  Some historians appropriately call this the “damnable question” of modern Irish history. Redmond reluctantly concluded that he would have to accept some different arrangements for Ulster.

The British government was decidedly pro-unionist. They had no intention of forcing the issue with the loyalists in Ulster and had little sympathy for the cause of Irish nationalism. Any new proposal had to have the imprimatur of the loyalist leader, Carson, who, unlike Redmond, won establishment kudos by serving in the cabinet during the years of the Great War.

Sinn Féin grew stronger after the British mishandling of the aftermath of the Easter Rising. In the 1918 Westminster election, they swept the board, leaving the IPP in the doldrums. They chose not to take their seats in Westminster and instead set up their own provisional government.

On the same day, January 21, 1919, that these Sinn Féin MPs met in the Mansion House in Dublin to choose their cabinet, the War of Independence began in Tipperary pitting the Irish Volunteers, now generally called the Irish Republican Army (IRA), against the various British security forces in Ireland.

The controversy in Ulster was very much part of the revolutionary mix, but the Republicans never planned to use force to sort out that problem. Military engagement with Protestants would involve betraying the core precept of Wolfe Tone’s inclusive political philosophy, and they were also conscious that the Ulster Volunteers controlled a huge militia of close to 100,000 armed men.

There were minor IRA skirmishes against the police in Monaghan and Down, but the bulk of the fighting in the War of Independence took place in Dublin and in the Munster area at the other end of the island.

Economic considerations were very much part of the discussion. Close to 70 percent of the Irish GDP was generated by the linen and shipbuilding industries in Belfast and surrounding counties. Protestant leaders pointed to these figures with great pride. In their story, economic success reflected on their biblical lifestyle and superior work ethic. By comparison, their Catholic neighbors were viewed as lazy and impecunious, an attitude found also among many of their co-religionists in Europe.

The English and Scottish planters who took control of the land in Ireland in previous centuries became Gaelicized over generations, more Irish than the Irish themselves. This transformation did not happen in Ulster.

Their brand of revivalist Christianity seemed to be rooted in the hot feelings of the religious wars of past centuries. They proudly professed their Reformation values, stressing freedom of conscience while despising Catholic dogmatism and subservience to the Vatican.

Most of them, Presbyterian and Methodist as well as Anglican, came to share the colonialist attitude of the ruling English caste who looked down on the local Irish.  William Hartpole Lecky, a distinguished Victorian historian and Unionist politician, made this point very trenchantly in one of his books by pointing out that the poorest down-and-out Protestant believed himself superior to the richest Catholic.

After completing the negotiations for the Treaty of Versailles in 1919, the British Prime Minister David Lloyd George began focusing on the problems in Ireland. The end of the Great War meant that the Home Rule Bill of 1912 had to be enforced in accordance with the agreement with Redmond who died a year previously.

He realized that the Irish situation had changed so dramatically in just a few years that no group, nationalist or loyalist, wanted the bill implemented. He set up a parliamentary committee under Walter Long, a strong unionist, to draw up new proposals. No nationalists were included in his group and none was consulted or asked for input.

Still, the Long committee recommendations were very interesting. They proposed two parliaments for Ireland, one encompassing the nine counties of Ulster and the other responsible for the rest of the island. In addition, they suggested a strong Council of Ireland linking the two with 20 representatives from each legislature. They were motivated by an effort to minimize the importance of religion by including all the Ulster counties in the partitioning arrangement.

Unionists objected loudly because the headcount of Catholics and Protestants would be close in a nine-county statelet, leaving them vulnerable, especially as the other side tended to have bigger families. To mollify their fears, three counties – Cavan, Donegal, and Monaghan – were moved to the southern jurisdiction, leaving the 70,000 Protestants in those counties with a sense of abandonment as the new lines were being drawn on the map.

The parliamentary bill that divided the island in this way – 26 counties in the south and six in the North – was called by an unwieldy and ironic name: “An Act to Provide for the Better Government of Ireland.” It pleased nobody because even Carson’s first option was for the status quo, direct rule by Westminster.

While the bill was making its way through parliament, British forces were engaged in an all-out war with the IRA in the south which resulted in 1922 in an independent government in Dublin. Sectarian violence erupted in Derry and Belfast.

Thousands of Catholic and Protestant socialist workers lost their jobs in the shipyards and elsewhere. From the summer of 1920 until the end of 1922, close to 500 people were killed in the six counties, disproportionately Catholics in Belfast.

The statelet was born in an atmosphere of fear and foreboding which continued to a greater or lesser extent in Northern Ireland until the Belfast Agreement in 1998. The new arrangements negotiated by representatives of both communities as well as the governments in London and Dublin were approved in referenda in both parts of the island. This agreement changed significantly the governing and policing structures and allows for occasional plebiscites on the constitutional issue of partition.

The division of the country was a momentous political happening 100 years ago. It has lasted a century without ever gaining full legitimacy in the aggrieved Catholic community.

The division of the island is on the front burner again in recent times as many nationalists and republicans demand a border poll as allowed in the Good Friday Agreement. That referendum on partition is likely to take place before 2030 with uncertain results.

Gerry O’Shea blogs at We Must Be Talking.