An overview of Ireland's War of Independence, which led to the partition of the island in 1920. 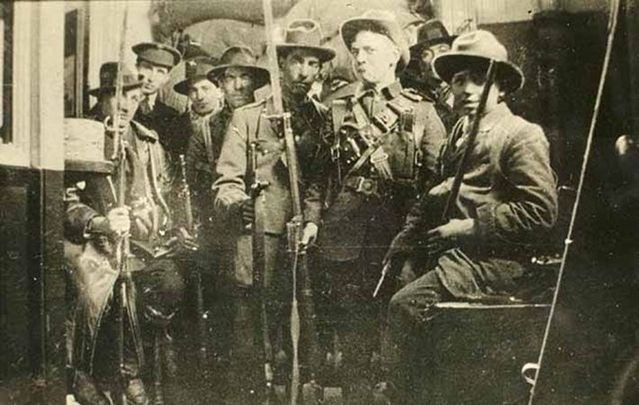 Members of the Irish Republican Army photographed during the 1916 Easter Rising. NLI

After the 1916 Easter Rebellion was crushed, Michael Collins, the future leading Irish revolutionary, reportedly said to one of his colleagues as they were marched off to jail that an Irish army should never again directly confront the military might of the British Empire. He promised that the next time they would face England on their terms, not as doomed targets in open warfare.

After Sinn Fein’s victory in the December 1918 Westminster elections, the Irish Republican Army (IRA) started a guerilla war where local battalions of their forces ambushed Royal Irish Constabulary (RIC) and British Army groups on patrol or just moving from one place to another. While they were very short of weapons, they took advantage of their superior knowledge of the local terrain and used the powerful element of striking first in surprise attacks to inflict serious losses on the enemy before withdrawing to nearby mountains or other safe-havens. This war lasted from January 1919 until July 1921 when a truce was agreed between the IRA and the British government.

However, 1919 is often seen as a preamble with only a few engagements, resulting in just 17 deaths, which hardly qualifies as a year of war. By the end of that year, the IRA chief of staff, Richard Mulcahy, declared that they were ready to engage the enemy, and by April 1920, 300 police barracks had been burned and the Irish War of Independence was in full swing.

The RIC had a mixed policing record in the country since they were formed 100 years earlier. On the one hand, they were often respected arbiters of local disputes, but they had to implement government policies in, for instance, clearing destitute tenants out of their holdings during the famine years, which seriously besmirched their record. Most of the ordinary policemen were Catholics but the command structure, the men giving orders, were nearly all English or members of the Unionist population.

Faced by a national uprising, many policemen were shunned locally, leading to low morale and some resignations from the force. The British government responded by raising the salary for the RIC and sending in help from the mainland.

The police had two semi-military support groups, mostly recruited in England to help deal with the upsurge of violence in Ireland. The Black and Tans, who came to be known disparagingly by local communities as the Tans, arrived in March 1920, numbering about 10,000, mostly English soldiers disbanded after the First World War.

The other group, the Auxiliaries, were formed a few months later in July and numbered about 2,300. They were an elite outfit, recruited from retired army officers, paid the princely sum of one pound a day. Despite the awful reputation of the Tans, the Auxies, their common name, were even more feared and hated by most Irish people. 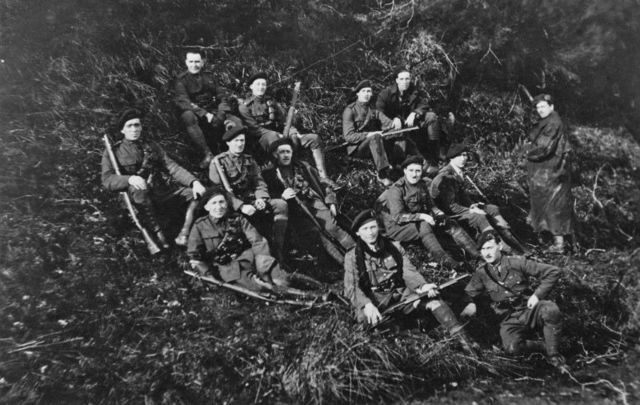 Men, possibly of the Royal Irish Constabulary (RIC) resting in the hills of Tipperary, Ireland, during the Irish War of Independence, 1921. Credit: GETTY IMAGES

Lloyd George and his cabinet colleagues in Westminster talked about the Irish war in terms of some local squabbles that the police were well-equipped to deal with. This was true in 1919, but by the second half of 1920, the authorities realized they were confronting a major insurgency.

All the police were armed except for the Dublin Metropolitan Police, who followed the unarmed Bobby tradition in London, and about 40,000 members of the regular British Army supported the war effort.

The IRA had superior numbers, about 115,000, but they only had around 3,000 rifles at best, and just a small percentage of IRA volunteers were involved in military actions, mostly in their elite flying columns.

Understandably, the hit and run guerilla tactics of the revolutionaries drew serious condemnation from the establishment forces. They dismissed the IRA as cowards who wouldn’t stand and fight.

The three branches of the RIC--Tans, Auxies and regular police officers, and army contingents too--buried their dead but, usually, couldn’t find the killers. Often they resorted to reprisals, including torturing civilians and burning the homes of suspected IRA members or sympathizers.

Cork was a hotbed of resistance to British rule in Ireland. The lord mayor of Cork, Tomas MacCurtain, was shot dead on March 20, 1920, near his home in Blackpool, almost certainly by a group of rogue RIC officers. In August, his replacement as mayor, Terence MacSwiney, was court-martialed for sedition. He refused to recognize the British courts and went on hunger strike in Brixton Prison in London.

Later that month, Oswald Swanzy, the RIC commander believed to be responsible for MacCurtain’s death, was gunned down in his hometown, Lisburn, by volunteers acting on orders from Michael Collins.

In late October, MacSwiney, at this stage freedom fighter seen as an international cause célèbre, died on his 74th day on hunger strike. He correctly predicted that his death from fasting in prison would be far more beneficial for achieving Irish freedom than if he was killed in a military engagement.

On November 28, men from the the 3rd Cork Brigade of the IRA under the leadership of British Army veteran Tom Barry carried out the largest ambush of the War of Independence at Kilmichael, an area between the towns of Bantry and Macroom. It was Barry’s response to the wild boast by British Prime Minister David Lloyd George at a banquet a few nights before in the Guildhall in London when, with the IRA in his sights, he declared “we have murder by the throat.”

Seventeen Auxies were killed in that encounter, which included savage hand-to-hand combat, and the battle was commemorated by a ballad that is still popular at Irish events.

In early December, the Cork No 1 Brigade planned an attack on a group of Auxiliaries at Dillon’s Cross, close to the city. One member of the Auxiliaries was killed and 11 were injured in that clash. This attack resembled the final straw that broke the camel’s back as two groups of angry Auxiliaries arrived in the Patrick Street area in the city center.

Amazingly, they burned down Grant’s Drapery Shop and Cash’s Department Store and by the time their rampage ended the following day, December 12, City Hall and the Carnegie Free Library were set aflame. Altogether, 40 businesses and 300 homes were lost to fire. This was widely understood as the Auxies’ unfettered revenge for Dillon's Cross and especially for Kilmichael.

There were many other reprisals by the British forces, but the burning of a city by policemen really caught the attention of the international community.Lloyd George admitted later that the policy of reprisals, culminating in the burning of Cork, caused heavy pressure on his government by the Church of England and from the leaders in Washington which resulted in a military truce that started in July 1921 and led to the Anglo-Irish Treaty five months later.

There were other major happenings in the war outside of Cork. September, Balbriggan, Co. Dublin, two policemen were shot dead in a bar. The official response led by the Tans included the bayoneting of two suspects and burning many houses in the town.

Also in September, three British soldiers, including Private Harold Washington, who was just15years old, were killed in a surprise IRA attack in Dublin. Kevin Barry, an 18-year old student, was convicted and hanged for his part in that operation, and quickly earned a hallowed place in the growing list of Irish martyrs.

Again, in the same month, five RIC men and one Black and Tan were killed in an ambush in Rineen in Co. Clare. The police reprisal ended the lives of five civilians.

Early in the morning of November 21, what came to be known as Bloody Sunday, Collins’ special squad assassinated 14 British agents. That afternoon, in a chaotic scene, the police and Tans shot wildly into the players and the crowd at a football game in Croke Park. Later in the evening, three senior IRA men were executed in Dublin Castle, bringing the total dead for the day to over 30.

For most Irish nationalists, the support Sinn Fein received in the 1918 election provided a sufficient mandate for the IRA to engage militarily with the British to achieve the Irish republic that was central to their agenda.

Read More: What goes around, comes around during Ireland's War of Independence

Without diminishing the bravery of the men and women who fought in the War of Independence, some recent historians of the period point out that there was a dark side to the revolution. One hundred and ninety-six civilians were killed by the IRA during the the1919-1921 period. Dubious accusations of spying or double-dealing with the RIC plus occasional targeting of big-house Protestants by a few IRA commanders resulted in executions that leave a black mark on the whole insurgency.

The year 1920, 100 years ago, ended with the passage of the disastrous government of Ireland Act which partitioned the island.

*This column was submitted to the Irish Voice newspaper, sister publication to IrishCentral, by Gerry O’Shea, who is based in Yonkers, New York. You can visit his blog "We Must Be Talking" here.