The partition of Ireland, 100 years on

A look at the partition of Ireland, which came to be as part of the 1920 Government of Ireland Act, and where it stands today. 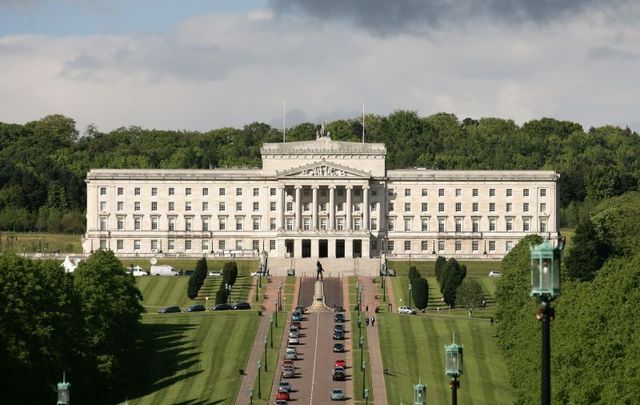 A century ago, while a War of Independence raged in Ireland, the people on the Emerald Isle started a new year with separate governments in the north and south. Change came when Great Britain approved the 1920 Government of Ireland Act just before Christmas.

The press gave the 1920 Act creating the geographic division more accurate titles. The Freeman’s Journal called it the “Dismemberment of Ireland Bill,” and the Irish News named it the “Partition Act.” The press did more than quibble about the title. The nationalist Irish News mocked the lawmakers' stated intent, “for the betterment of Ireland,” and explained it was an “abominable” plan put together by “unscrupulous politicians to assassinate Ireland’s nationality.”

The 1920 Act was a step away from unity. In essence, the law was simply a fourth home rule bill, which set up two separate home rule parliaments - the Belfast parliament for six northeastern counties and the Dublin parliament for 26 southern counties. The 1920 Act replaced the 1914 Home Rule law, which had called for a single parliament in Ireland. Its implementation had been placed on hold during World War I (WWI) and throughout the Paris Peace Conference that led to the Treaty of Versailles peace agreement and the official end of WWI.

Post-Treaty, attention returned to the issue of home rule for Ireland. British Prime Minister David Lloyd George appointed unionist Walter Long to chair a committee formed to study how home rule could be implemented in the face of strong unionist opposition. The Long Committee recommended two home rule parliaments for Ireland instead of one. The Committee also recommended that Northern Ireland be made-up of nine counties - six counties in Ireland’s northeast that made it into the law along with Counties Cavan, Donegal, and Monaghan.

Unionists, however, only wanted six counties where the unionist population was sufficiently substantial included in the new statelet. This would make their hold on power stronger. Cormac Moore writing in the Irish Times explained that unionists feared being “outbred by Catholics” and losing control in Cavan, Donegal, and Monaghan. In the end, the unionists got their wish. They got the six counties that they wanted for Northern Ireland.

It was this two-parliament recommendation that split the island in two for purposes of governance. Partition was law under the 1920 Act. Unionists came around to support it. For them, it meant a divorce from the rest of Ireland. They understood it would allow them to manage their own affairs and stay connected to Great Britain.

The 1920 Act implementing the two-parliament recommendation gave each parliament the “power to make laws for peace, order and good government” in their respective jurisdictions. However, it also made the Westminster Parliament supreme. Neither of the parliaments on the island could alter any law passed by Westminster within their boundaries.

Sinn Féin rejected the new law. For them, it came three decades too late. Sinn Féin and the IRA were already fully engaged in a fight against the British for independence and self-determination. The 1920 Act offered nothing close to that. Besides that, Sinn Fein had already gotten full governing power in the Dáil Éireann and did not need anything else to exercise that authority.

The 1920 Act also created a Council of Ireland comprised of 20 members from each parliament with authority to issue orders on matters common to both jurisdictions. One purpose of the Council was to ensure uniformity between the two parliaments on common issues. The Council was also set up “with a view to the eventual establishment of a Parliament for the whole of Ireland and to bring about harmonious action between the parliaments and governments of Southern Ireland and Northern Ireland.”  [Government of Ireland Act 1920, emphasis supplied]. The language created an illusion that a single parliament for all of Ireland would peacefully evolve from the two. That never happened.

In a Christmas address to Parliament, King George V referred to the 1920 Act as “the fruit of more than 30 years of ceaseless controversy.” He said he hoped it would “finally bring about unity and friendship between all the peoples of my kingdom.” Unionist Edward Carson also spoke of unification. He said the new law provided a way where “the people of Ireland could of their own accord achieve unity.”

The comments on unity were hollow. The British government knew it took more than home rule to satisfy Sinn Féin's demand for independence. The British government also knew that the majority of Irish people agreed with and supported Sinn Féin's position. The 1920 Act fell far short of delivering a realistic hope for independence. The Council of Ireland north and south never met, rendering talk of unity meaningless. The law’s suggestion that a single, unified parliament for Ireland could be achieved amounted to a false promise. Now, 100 years later, the island still has two legislative bodies - the Northern Ireland Assembly and the Irish Dáil.

On this past New Year’s Day, people on the island began to deal with the ramifications of the 1920 Act in a new way. Brexit, the UK’s exit from the EU, took effect on January 1st. Under the Northern Ireland Protocol provision of the UK’s withdrawal agreement with the EU, Northern Ireland will remain in the EU single market for goods while the rest of the UK leaves. This means frictionless trade at the border between Northern Ireland and the Republic of Ireland, which is an EU member, will continue. Goods traveling from Great Britain across the Irish Sea, however, will be subject to customs checks at Northern Ireland ports. where EU customs rules will be enforced.

This divergence is good for Northern Ireland because it provides an advantage over the other devolved governing parts of the UK - Scotland and Wales. Yet it remains to be seen how Brexit will change everyday life in Northern Ireland, where 56 percent of its citizens voted to remain in the EU in the Brexit referendum in 2016.

Already, Brexit has brought the issue of Irish re-unification to the fore. Sinn Féin leader Mary Lou McDonald noted this recently when she expressed a view that unionists will “remain British” even if Northern Ireland voted to leave the UK.  According to the Irish Times, she said, “[w]e have citizens that are British . . . they are British in a partitioned Ireland and they will be British in a united Ireland.”

A lot of work must be done to convince those citizens that their lives will be better in a united Ireland as full members of the EU.

Unlike the vague allusion to unity in the 1920 Act, the 1998 Good Friday Agreement (GFA) specified how unity can be achieved. The GFA stated that a unity referendum should be held when it appears likely to the Northern Ireland Secretary of State that “a majority of those voting would express a wish that Northern Ireland should cease to be part of the United Kingdom and form a part of a united Ireland.” A voting majority in a border poll means 50 percent plus one. This answers the question of how re-unification can happen, but not the question of when it will happen. It is an unresolved and highly debated issue.

United Irelanders should take heart from this debate. As Northern Ireland begins its second century as a statelet, a vote on re-unification is closer than it has ever been before. And hopefully, with it, the end of partition.