Step-back on immigration begs the question to be answered…There is an awful lot hanging on the eventual answer. 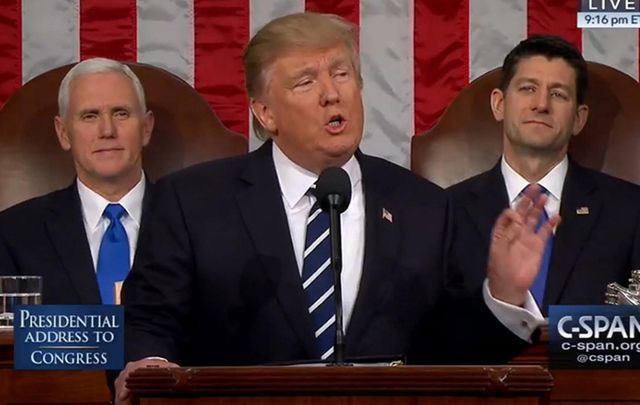 President Donald Trump launched yet another surprise in terms of policy when he backtracked on draconian immigration enforcement and stated he would support a comprehensive immigration reform package. He was speaking to a group of news anchors before his address to the joint session of Congress.

It is clear a battle has been joined for the heart of this presidency between hardliners, determined to pass as many right-wing policies as possible, and a more moderate group, centered around Trump’s daughter and husband who are trying to steer him away from trouble after a disastrous start.

The second factor is that Trump abhors bad publicity and low ratings and he has been getting plenty of both. The turn to moderation could well be in response to those biting criticisms that so offend his vanity.

The turnaround was signaled yesterday. He stated, “The time is right for an immigration bill as long as there is compromise on both sides.”

What to make of this dramatic policy reversal? It kicks in the underpinning of his entire harsh immigration policy to date and sends the issue into orbit with no one knowing where it will land.

#Trump says he wants to reform legal immigration and protect the US from "those who will do us harm". Read more: https://t.co/YwR6z2P2GX pic.twitter.com/qDXGuKo35d

For beleaguered undocumented and their supporters it offers a ray of hope at a very dark time, but they will suspect it is for the optics only. Put simply, Trump hates being unpopular: his round up of non-criminal immigrants has enraged opponents and has been lashed mercilessly in the press. The Donald does not like that.

Ergo, the walk back on immigration. But is it real or another fantasy woven from the same cloth as other farfetched plans put forward by this president?

It will be a crushing blow if this turns out to be another feint aimed at stopping the hostile coverage.

“We are not ready to praise him or Republicans,” said Cesar Vargas, director of the Dream Action Coalition in a statement. “Before Trump can be taken seriously, we need to see details.”

Congressional Hispanic Caucus Chairwoman Rep. Michelle Lujan Grisham, a Democrat from New Mexico, said of Trump's openness to an immigration reform bill, “We’ve been ready.” But ready for what?

A new pro-legalization policy would also enrage his supporters, led by the dark prince Steve Bannon, who has made deporting every illegal possible the nub of immigration policy. Attorney General Jeff Sessions and White House Advisor Steve Miller have been closely connected with the hardliners too.

Millions of Americans voted for his get tough policy – how will they feel now if it is abandoned?

Who is Donald Trump politically? Is he the hardest of hardliners as Bannon would wish, or a New York Republican with relatively liberal views?

His step-back on immigration begs the question to be answered. We simply do not know what that answer is yet. There is an awful lot hanging on the eventual answer.