President Trump - It is time to deport your wife for working illegally!

Under the new guidelines issued by the Department of Homeland Security, Donald Trump should order his wife deported back to Slovenia. 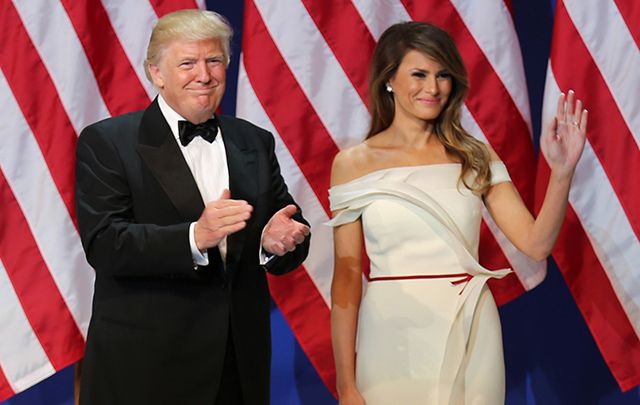 Under the new guidelines issued by the Department of Homeland Security, Donald Trump should order his wife deported back to Slovenia. Fox News reported she had worked illegally when she came to America first.

Given that today it was announced that the description of a crime committed by an immigrant has widened, Melania seems to fit the bill exactly.

The Washington Post states that Homeland Security Honcho General Kelly has made the new orders clear: “Kelly’s new DHS policies considerably broaden the pool of those who are prioritized for deportations, including undocumented immigrants who have been charged with crimes but not convicted, those who commit acts that constitute a 'chargeable criminal offense,' and those who an immigration officer concludes pose 'a risk to public safety or national security.'"

A chargeable criminal offense includes working illegally as Melania did. She broke the law—she must pay.

And it’s not fake news! Fox News reported this during the campaign.

A Fox news report stated: “Melania Trump was paid for 10 modeling jobs in the United States worth $20,056 that occurred in the seven weeks before she had legal permission to work in the country, according to detailed accounting ledgers, contracts and related documents from 20 years ago provided to The Associated Press.

“The details of Mrs. Trump's early paid modeling work in the U.S. emerged in the final days of a bitter presidential campaign in which her husband, Donald Trump, has taken a hard line on immigration laws and those who violate them … Trump has noted that federal law prohibits illegally paying immigrants.”

Mrs. Trump, who received a green card in March 2001 and became a U.S. citizen in 2006, has always maintained that she arrived in the country legally and never violated the terms of her immigration status (which is not true, according to Fox).

During the presidential campaign, she has cited her story to defend her husband's hard line on immigration.

So we can look forward to an ICE raid on Trump Tower no doubt with Melania dispatched in handcuffs to JFK? I doubt it.