Irish people shouldn’t expect Trump to make moving to or remaining in the US any easier. 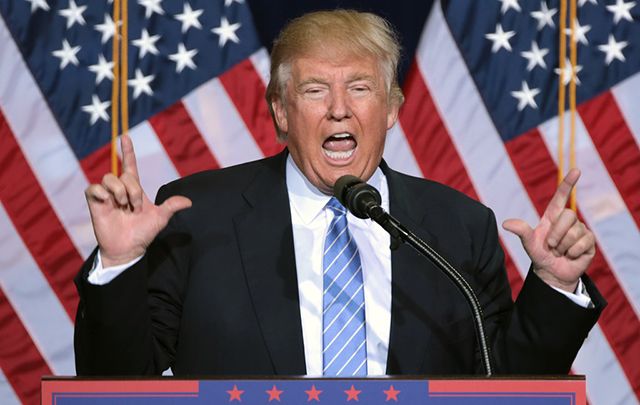 Irish people shouldn’t expect Trump to make moving to or remaining in the US any easier. Gage Skidmore / Flickr

President Trump promised in his campaign to crackdown on immigration, pledging to “keep immigration levels, measured by population share, within historical norms.” During the first week of his new administration he's come good on many of the promises he made to his supporters while on the campaign trail last year. The president signed several executive orders, including one on immigration that sparked protests worldwide.

For Irish professionals the H-1 B visa is especially important. Between 2010-2015 approximately 3,200 H-1B visas were issued to Irish citizens, according to expert Simon Gillespie. This visa represents the only chance for many people to move legally to the US.

However, a California congresswoman is proposing that the minimum wage for a prospective H-1B employee be increased to an annual $130,000 and this would, if enacted, represent a major roadblock for skilled Irish graduates hoping to come to the United States and make a living over here.

In light of the changing landscape of immigration in the US over the past two weeks, we look at the various types of immigrants and visa-holders who are currently in or hoping to move to the US, many of which groups will include Irish citizens. Although his most recent executive orders on immigration do not look to have a large direct impact on Irish immigrants, in particular, Trump's choices now could be seen as a sign of even stricter regulations to come and these will undoubtedly have a greater effect on Irish people living and working in the US.

Here’s what the Trump administration means for immigrants in America today:

Last week, President Trump signed a sweeping executive order that holds back federal funds from the nation’s 140 sanctuary cities. People engaged in law enforcement in sanctuary cities, like Boston and New York, do not comply with federal rules surrounding immigration and never ask people for proof of their right to live in the United States. However, from now on, “Jurisdictions that willfully refuse to comply are not eligible to receive Federal grants, except as deemed necessary for law enforcement purposes by the attorney general or the secretary.”

Mayors in many sanctuary cities have already said they won’t comply with the Executive Order. "Our police department is not enforcing federal immigration policy," Salt Lake City Mayor Jackie Biskupski told the media. "The Salt Lake City Police Department has a longstanding practice against officers inquiring about the immigration status of those they come in contact with on a day-to-day basis."

However, other cities, such as Miami-Dade are ready to comply, and from now on immigrants who come into contact with the police in those cities may be asked to prove they have the right to live and work in the United States.

Donald Trump made the existence of an estimated 11 million undocumented immigrants – of which 50,000 are thought to be Irish – a cornerstone of his campaign. In an interview with "60 Minutes" after his election, he said he would look to swiftly deport those undocumented with criminal records.

“What we are going to do is get the people that are criminal and have criminal records, gang members, drug dealers, where a lot of these people, probably 2 million, it could be even 3 million, we are getting them out of our country or we are going to incarcerate,” he said.

Anyone in the United States who entered without passing through a border inspection committed a criminal offense and as such would likely fall into the 2 million Trump wants to deport as a priority.

While campaigning, Trump said that he wanted all undocumented immigrants to leave the United States. “If they've done well they're going out and they're coming back in legally," he said. However, since then he has gone quiet on those without criminal records, instead focusing his wrath on undocumented immigrants with criminal records. Trump's Press Secretary Sean Spicer last week confirmed to the press that the plan to deport 2-3 million early on in the administration is still in place and that criminals will be the first ones targeted.

Ireland’s Minister for Foreign Affairs Charlie Flanagan said he was aware of the new Executive Order and monitoring the situation, “Our embassy in Washington, DC and our consulates remain in active and ongoing contact with Irish immigration centers throughout the United States. My department will continue to monitor the developments in this area very closely."

Taoiseach (Prime Minister) Enda Kenny raised the issue of the undocumented with Irish American Vice President Pence soon after the election but has not revealed publicly Pence’s thinking on the issue.

Had a really good conversation tonight with US VP Elect Mike Pence. He certainly knows Ireland and the issues that matter to our people.

People who were brought to the United States illegally as children, so-called DREAMers after the failed Development, Relief, and Education for Alien Minors Act that sought to give them a pathway to citizenship, are still in limbo. The estimated 750,000 such individuals have yet to be told what fate awaits them.

Trump opposed the DREAM Act as a candidate but made it clear that he sympathized with the people it targeted. “They got brought here at a very young age. They’ve worked here; they’ve gone to school here. Some were good students. Some have wonderful jobs. And they’re in never-never land because they don’t know what’s going to happen,” he told TIME.

White House Press Secretary Sean Spicer refused to comment on the issue at a press briefing, but in December the then president-elect cryptically said, “We’re going to work something out that’s going to make people happy and proud.”

Read more: How hard is it for Irish people to move to the US today?

Trump’s campaign pledged to end the J-1 visa that thousands of young Irish people use to work temporarily in the United States. College students can use it to find seasonal summer work in the US before returning home and graduates may spend up to a year interning in a field related to their degree.

The program was controversially attacked by the New York Times in 2015 as “a source of embarrassment for Ireland, marked by a series of high-profile episodes involving drunken partying and the wrecking of apartments in places like San Francisco and Santa Barbara.” The newspaper's comments came after the deaths of five Irish students in Berkeley, CA, who died when they balcony collapsed in the apartment where they were celebrating a 21st birthday party. The five students were in the US for the summer on J-1 visas.

The visa has also been the subject of some criticism for the manner in which young international students can be brought to the country, paid below minimum wage and housed in sub-standard conditions, used as seasonal workers and, potentially, replace US employees. Vocativ reports that although it costs the average J-1 student around $3,000 to come to the US, many of them earn less than the minimum wage while here, with au pairs earning as little as $10,179 a year.

In 2013, NPR also reported on the poor employment and accommodation conditions of a number of foreign college students working for McDonald's, seven of whom were housed in a basement, sleeping in bunk beds and given just 25 hours a week to work but required to stay on call at all times—far from the educational cultural exchange model on which the J-1 program was originally established.

Trump’s website promised voters that the visa would be “terminated and replaced with a resume bank for inner city youth provided to all corporate subscribers.”

However, after he won the election the pledge mysteriously vanished from his website.

While reform may be needed to ensure that J-1 students at least receive the minimum wage while in the US, some doubt he’ll follow up. Boston Lawyer Larry Donnelly told Irish radio last year, “I wouldn’t put a lot of credence in what Trump says. The J-1 is a fantastic vehicle for promoting international relations.”

Enda Kenny has pledged to lobby the new Administration on the issue. “I’d hate to see that go,” he told IrishCentral at a press conference in New York just after Trump’s election. “I think the J-1 has been an incredible opportunity and a brilliant example of connecting with different countries and cultures for young people. I’d like to think we could work together to develop that for the future.”

The H-1B visa has also been earmarked for change by the new President. Now a bill introduced by Representative Zoe Lofgren of California seeks to double the salary requirements for an H-1B to $130,000. This would cause huge problems for the thousands of Irish who seek the visa.

According to Lofgren, the High-Skilled Integrity and Fairness Act of 2017 would curtail abuse of the program which has facilitated the replacement of American workers with cheaper H-1B workers. In several recent incidents, high-profile U.S. employers including Disney, Southern California Edison, and, most recently, the University of California San Francisco, have made news in this manner.

“My legislation refocuses the H-1B program to its original intent – to seek out and find the best and brightest from around the world, and to supplement the U.S. workforce with talented, highly-paid, and highly-skilled workers who help create jobs here in America, not replace them,” said Lofgren. “It offers a market-based solution that gives priority to those companies willing to pay the most. This ensures American employers have access to the talent they need, while removing incentives for companies to undercut American wages and outsource jobs.”

The High-Skilled Integrity and Fairness Act of 2017 prioritizes a market-based allocation of visas to those companies willing to pay 200% of a wage calculated by survey, eliminates the category of lowest pay, and raises the salary level at which H-1B dependent employers are exempt from nondisplacement and recruitment attestation requirements to greater than $130,000.

The visa is used by US employers to sponsor foreign workers with certain specific skills sets and allows users to stay for three to six years. Trump had previously used it to bring models into the country but changed his mind as a candidate. “I will end forever the use of the H-1B as a cheap labor program, and institute an absolute requirement to hire American workers first for every visa and immigration program. No exceptions,” he said in March last year.

Unlike the J-1, no one is talking about abolishing the H-1B visa but it seems likely that numbers will be slashed and the lottery system that awards it could be changed to prioritize those immigrants with advanced educational qualifications and/or higher salaries.

Trump has also toyed with the idea of no longer granting green cards to “foreign workers abroad.” He never outlined his exact proposals, but that could mean he plans to end the Green Card Lottery that grants 50,000 visas to people from countries with a low number of citizens already in the US. In 2015, 157 people from the Irish Republic gained the right to live and work in the US through this program, as well as a further 41 from Northern Ireland.

It could also mean he intends to slash the number of green cards available to the relatives of US citizens.

Are you in favor of or against Donald Trump's policies on immigration? Share your thoughts in the comment section.