The Irish American who invented Trumpism has gone from obscurity to second most powerful man alive says Time. 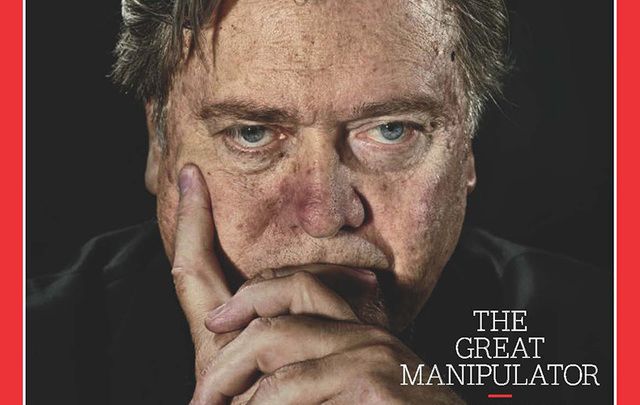 Apart from the President himself, there is no one in American politics, or indeed the world, more powerful than Steve Bannon.

Don’t take our word for it. Steve Bannon, of County Clare ancestry, is featured on the cover of this weeks’ Time Magazine, which says Bannon is the second most powerful man alive.

There is no one closer to Trump or more responsible for his policies. Not since lawyer Tommy Corcoran convinced FDR to implement the “New Deal” has anyone in the White House been so powerful.

There is also no one who incites the ire of the left more than the White House’s Chief Strategist Steve Bannon.

Labeled a “white supremacist” by Nancy Pelosi and caricatured by terrified “Saturday Night Live” liberals as the grim reaper and the power behind the throne, the 63-year-old Irish American has been catapulted into the spotlight in a way few would have predicted this time last year.

Bannon was a believer in “Trumpism” when President Trump was a Democrat and reality TV star, and if the administration is going to refashion American politics with a new political ideology, Bannon will be the midwife.

“I come from a blue-collar, Irish Catholic, pro-Kennedy, pro-union family of Democrats,” Bannon told Bloomberg before he shot to global fame. “I wasn’t political until I got into the service and saw how badly Jimmy Carter f***ed things up. I became a huge Reagan admirer. Still am. But what turned me against the whole establishment was coming back from running companies in Asia in 2008 and seeing that Bush had f***ed up as badly as Carter. The whole country was a disaster.”

Disenchanted, Bannon co-founded Breitbart News – the 'go to' website for the so-called “alt-right.” The site considers itself “anti-establishment,” but it has been derided as a racist and misogynist peddler of fake news by opponents.

Bannon's appointment as Chief Executive of Donald Trump’s campaign in August unleashed a flurry of condemnation from Congressional Democrats; 169 signed a letter urging then candidate Trump to dump Bannon because of his ties to “white nationalism” – a charge he rejected.

In the few short weeks, he’s had a desk in the West Wing, Bannon has attracted criticism and attention in a way no White House staffer has since Karl Rove worked for George W. Bush.

The thrice divorced Catholic is apparently teaming up with conservative critics of Pope Francis within the Vatican to try and undermine the left-wing pontiff, the New York Times reported.

Until January 20 this year Pope Francis had a kindred spirit in the Oval Office on issues such as climate change, immigration and Islam. President Trump’s election changed all that and the administration is readying itself for clashes with Rome over many totemic issues.

People who oppose the #MuslimBan

See the problem yet?

In private Bannon has derided His Holiness as a “socialist/communist” and the Pope’s internal critics hope he’ll be a valuable ally in the fight for “radical traditionalist” values.

He’s also earned the ire of skeptical generals following his appointment to the National Security Council.

“Putting aside for a moment Mr. Bannon’s troubling public positions, which are worrisome enough,” Michael Mullins, a former Chairman of the Joint Chief of Staffs wrote, “institutionalizing his attendance threatens to politicize national security decision-making.”

Steve Bannon sitting on the National Security Council is dangerous and unprecedented. He must be removed.

He added that he feared giving a political operator such an important role would, “have a chilling effect on deliberations.”

What influence his Irish heritage has on his politics is unclear. Speaking to Irish radio station Newstalk in 2011, Bannon spoke about how he felt the backbone of the Tea Party was made up of people in the South and the Midwest of Scotch and Irish descent, but there’s little else to suggest his links to Ireland will shape his work in the White House.

After the election one worried Londoner fretted on Twitter that his Irish roots would make him hostile to Britain – perhaps, finally, a claim too wild for even Steve Bannon.

Steve Bannon will be no ally of GB, from Irish catholic heritage (which is why white supremacist is so confusing) pro United Ireland.

He did, however, explain to Newstalk about what drove his political activism during the Obama years. “We have socialism in the United States for the very wealthy and very poor, and a brutal form of capitalism for everyone else.”

The then journalist was also remarkably prescient that the White House would soon be occupied by a rank outsider. His prediction missed the mark by four years (he originally said Americans would replace Obama with a Tea Party conservative in 2012), but still, unlike most of the media, Bannon can genuinely attest to having predicted the rise of Donald Trump.

This difference from what Sarah Palin refers to as the “lamestream media” perhaps undermines Bannon’s contempt for much of American journalism; only a few short days into the Trump administration he launched into a vicious diatribe against his former trade.

“The media should be embarrassed and humiliated and keep its mouth shut and just listen for a while,” he said. “The media here is the opposition party. They don’t understand this country. They still do not understand why Donald Trump is the president of the United States.”

After an election in which only two of the country’s hundred top newspapers backed his boss it’s hard to refute that Bannon might have a point. Rarely before can there have been such a gulf between journalists and those who still buy their newspapers. But could Bannon’s attacks be motivated by something beyond the avalanche of attacks his boss endured as a candidate last year?

Media outlets were quick to remind voters that Bannon’s second wife, Mary Louise Picard, accused him of battery and domestic violence before their divorce in 1996. Piccard dropped the charges but said at the time that she only did so after she was “threatened” by Bannon’s attorney and convinced that if she went ahead she “would have no money and no way to support the children.”

She also alleged that he complained the school they sent their daughters to had too many Jewish pupils and that Jews raise their children to be “whiny brats.” All of which Bannon denies.

His third wife, Diane Clohesy, a fellow Tea Party activist and Breitbart News contributor, has a history of drug misuse. She was involved in a bizarre case involving smuggling drugs into a prison inmate. They divorced in 2009, but have since collaborated on a documentary about Sarah Palin.

Bannon is one of the most powerful and provocative figures in Trump’s inner circle and, it’s said, it was he who pushed most strongly for Press Secretary Sean Spicer to make his bogus claims about the size of the crowds on Inauguration Day.

"The globalists gutted the American working class and created a middle class in Asia. The issue now is about Americans looking to not get f***ed over,” he told the Hollywood Reporter.

It's a high bar to scale, but it does not seem that Bannon has had the time to contemplate failure yet.

"I am," he gushed to them, "Thomas Cromwell in the court of the Tudors."

Perhaps unaware that when Cromwell failed to deliver for King Henry VIII he was denounced as a traitor and executed for treason. Steve Bannon must hope he can avoid a similar fate.