The Irish American's debut as White House Director of Communications and Press Secretary quickly turned into a baptism of fire. 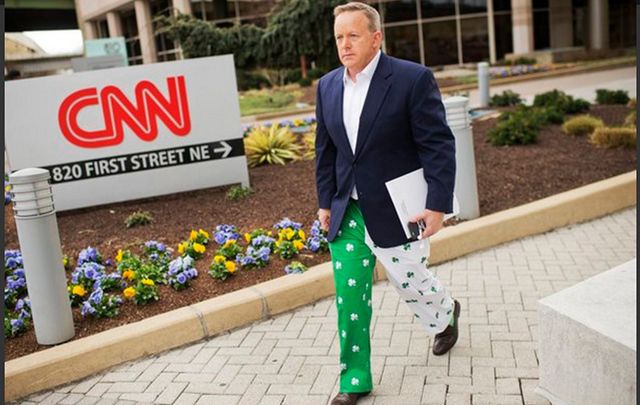 Sean Spicer's debut as White House Director of Communications and Press Secretary quickly turned into a baptism of fire.

He defended President Trump’s assertion that there were 1.5 million people at his inauguration, despite overwhelming evidence to the contrary.

Some in the media speculated he would be out of a job after only days in the White House.

Spicer rebounded with a good press conference on Monday, but by Wednesday he was back in the soup, defending Trump’s comments that 3 million illegal votes were cast against him.

The New York Times headline said it all: calling it a “false claim.”

Sean Spicer, (45), is a proud Irish American. He is a native of Barrington, Rhode Island and a graduate of Portsmouth Abbey, the exclusive Benedictine boarding school near Newport. He developed an interest in Portsmouth Abbey early on: “There was something about the Abbey that was special, and I wanted to be there,” he told an interviewer from the school years later.

His great-grandfather William Spicer immigrated to America from Kinsale, County Cork, according to Simon Carswell in The Irish Times, and joined the Navy, showing conspicuous bravery during the Spanish-American war.

President William McKinley presented him with the Medal of Honor. The citation says: “The President of the United States of America, in the name of Congress, takes pleasure in presenting the Medal of Honor to Gunner's Mate First Class William Spicer, United States Navy, for extraordinary heroism in action on board the U.S.S. Marblehead at the approaches to Caimanera, Guantanamo Bay, Cuba, 26 and 27 July 1898. Displaying heroism, Gunner's Mate First Class Spicer took part in the perilous work of sweeping for and disabling twenty-seven contact mines during this period."

His great grandson is back in the sight of an American president but in very different circumstances. The name Spicer is unusual, but Genealogy.com notes the DNA testing shows that Spicer's family members “display the genetic footprint of early Celtic Britons who were present before the Roman army entered the Isles.”

For a career mentor he mentioned Ed Gillespie, who has served as the Republican Party chair and as a senior White House counselor, and who almost won a seat in the U.S. Senate and is expected to run for Governor of Virginia.

Headed into the @CNNSitRoom at 5pm on @cnn to help get @wolfblitzer into #StPatricksDay spirit pic.twitter.com/SD4vmoO6wQ

St. Patrick’s Day is a big event for Spicer, as the above photograph shows, but he will need the luck of the Irish in his new and deeply challenging job.

Read more: Irish Wake for Democrats’ 2016 despair turns into beginning of a resistance