"The strength of the Irish is we know how to deal with a bully. We have a lot of experience with bullies. The Irish can take care of this.” 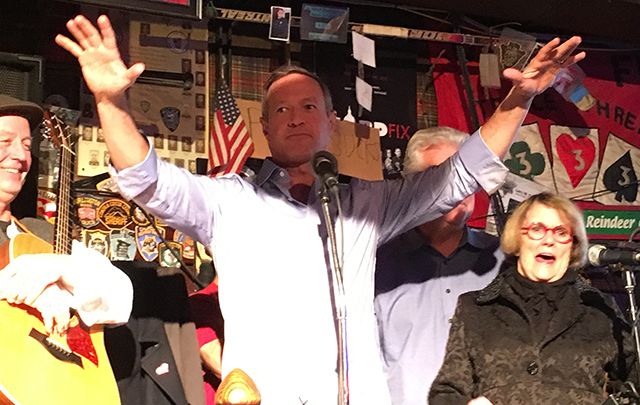 The Irish American Democrats held an Irish Wake in D.C. on Saturday, January 21, just after the Women’s March took over the streets of the Capitol. There were no dirges, no keening, no tears; but there was hope, solidarity and renewed energy aplenty.

The wake, held at Kelly’s Irish Times, near D.C.’s Union Station, had been billed as a chance to “lay to rest the year 2016, to mourn our loss and to honor the memory.”

While many gathered talked about their lingering disappointment over the results of the 2016 election (an a large banner gave a clear reminder of the final tally of the popular vote, which Clinton won by nearly 3 million votes), the vibe in the pub, buoyed by the historic march beforehand, was one of determination.

“We're here tonight for our Irish Wake, to finish our grieving and use our Jameson and our Guinness to say goodbye to our crying and our concern for the terrible year we had in 2016," Stella O’Leary, founder and president of the Irish American Democrats, told the crowd.

"The strength of the Irish is we know how to deal with a bully,” she said, referring to the newly inaugurated President Trump. “We have a lot of experience with bullies. The Irish can take care of this."

Martin O’Malley, the former Governor of Maryland and Democratic Primary contender who dropped out of the race after the Iowa caucuses and went on to support Clinton, was there to deliver a eulogy, but he agreed that the tone had shifted past one of mourning.

“I wouldn’t regard it as a wake, I’d regard it more as the beginning of the resistance, which is also a very Irish thing,” he said. “We’re good at resistance.”

O’Malley, who’s also known for his Celtic rock band O’Malley’s March, led the crowd in a spirited sing-along of Woodie Guthrie’s “This Land is Your Land,” before playing two traditional Irish songs.

He acknowledged that the Democratic party had a rough year, and a lot of work to do for the next mid-term and presidential elections. “We need to strengthen our party. We lost so many races, we relegated our party to the status of a shell corporation for bad presidential debt, and then we paid the price up and down the ballot. We can’t do that. Fortunately, I think a lot of people have now woken up to that reality.”

Asked if he would consider running again in 2020, O’Malley said he “just might.”

And he was full of praise for the Women’s March, which he attended before the Wake. “I thought it was great. There were people from all over the country who felt the desire, felt a need to come together and express their belief in a more compassionate and more generous country. I think a lot of us really needed that, we needed to see that our country hadn’t become some sort of strange, brutal, mean-spirited place.”

Allie and Meg, a mother and daughter with Galway roots who had traveled from Alexandria, VA and Pittsburgh, PA, respectively, said that they had come to D.C. because of Donald Trump. (They did not refer to him by name but used a more anatomically descriptive epithet comparing two orifices of the digestive tract.)

“His being elected is so disheartening that I felt like I wanted to do something, and this is a perfect way to do it. We felt solidarity with other women, it was very much worth it. We loved it,” Meg enthused.

For members of the Irish American Democrats board, the weekend was as much about catharsis as it was getting down to work.

“We’re keeping up the energy, we’re positive, we’re organizing, we’re going to make sure we come back in the next elections,” said Brent O’Leary, who had traveled from New York.

Linda Dyer Hart, who had flown up that morning from South Carolina on a plane full of protesters, agreed. “That’s one of the reasons why we’re here, all of the Irish American Democrats are getting together to plan our goals for the future. How do we get more Democrats elected.”

John McCarthy, vice president of the Irish American Democrats, said that the whole day demonstrated “the Democrats’ commitment to double down on efforts in 2017. We have competitive State House races, the Governor’s races in New Jersey and Virginia, and I think today’s march and tonight’s event show that Democrats are not just sitting around being upset about 2016 but really getting together and strategizing for the road ahead.”