In his new novel "Stolen Faith," author James McVeigh builds a novel within a non-fiction book, leaving the truth intact but placing it in the concert of a mystery to be solved decades later. 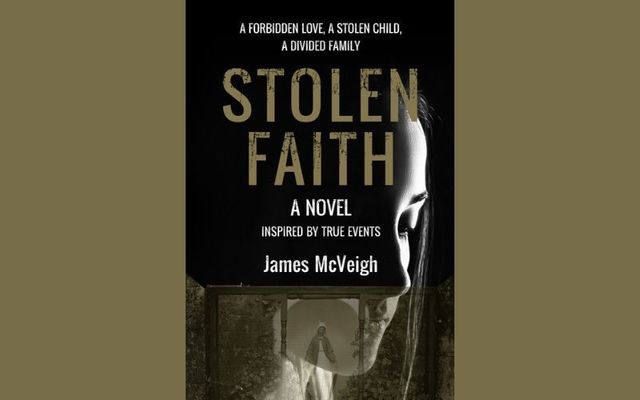 The Tuam babies is the scandal that will not go away - the placing of pregnant young Irish women in their thousands in mother and baby homes, which turned out to be orphanage mills where children were snatched from helpless mothers and bought for adoption by mostly wealthy Irish Americans.

The orphanage in Tuam, County Galway was the epicenter of the stealing of children and the slave-like working conditions for the unmarried mothers in the laundry. The nuns in charge seemed to take a sadistic delight in punishing the pregnant mothers.

The young children suffered immeasurable pain and harm as did their mothers, convicted only of loving a man and becoming pregnant. Babies who died were flung into a sewer pit like Jews were in Nazi concentration camps. Novelist James McVeigh paints a vivid and memorable portrait of their suffering, all of which happened starting in the 1950s up to the early part of the new century.

James McVeigh has certainly done his homework on the scandals that gripped Ireland from the time that Catherine Corless, a local historian in Tuam, uncovered the horrific fate of the mothers and babies locked up in such homes. She estimated 796 children’s bodies were flung into the sewer system, unimaginable to even think about the scale of the cruelty involved except to know Nazi exterminators would have been proud of the Tuam death camp.

This is a novel within a non-fiction book that tells the tragic story, leaving the truth intact but placing it in the concert of a mystery to be solved by several families who were torn apart when the truth surfaced decades later.

The title refers to the sale of a child called Faith Rafferty to America. While the Rafferty family searches for her, they come across many other stories of what happened when the adopted and sold out children reached American shores.

The novel opens brightly. James McCann, a handsome American soldier based in Belfast, meets and falls in love with a local girl, Rose Rafferty. Rose, however, finds herself pregnant as James departs Belfast for the D-Day invasion.

Rose's father, a rigid old-style nondrinker, deliberately intercepts all the mail from the young American bound for his lover. The local parish priest advises that mother and child be sent to Tuam to save the family grief.

The portrait of the workplace is not without compassion for some of the nuns who worked there, but the general impression is of a death camp with little babies dying on a weekly basis and other children snatched from their parents for the lucrative American adoption market.

The bulk of the book ends up on the gritty streets of Boston where the search for Faith, Rose's daughter who was adopted, begins.

The novel clings closely to the facts and brings to life the unbelievable cover-up instituted by Boston’s Bernard Cardinal Law who, in real life, left town for the Vatican just before police closed in.

McVeigh excels in the recreation of the era, much of it familiar to the world thanks to the Oscar-winning movie “Spotlight,” which tells how an intrepid group of Boston Globe reporters discovered the venalities and crimes committed by the Archdiocese.

In McVeigh’s novel, the fictional Bishop O’Rourke takes the place of the many molesters and McVeigh has obviously done his homework on how the horrific charade of a noble church, giving a new chance to motherless Irish orphans, played out for years.

As Donald Trump has proved, a farrago of lies can overwhelm the truth, a point this book makes on several occasions as the search for the real criminals goes on.

The best scenes in the book involve the court case where Bishop O’Rourke is forced to defend himself.

McVeigh captures the arrogance, pomposity, and sheer evil of many of the molester priests in the person of O’Rourke in gripping courtroom dramas.

The journey the book takes us on reminds us once again of how horrific the true tale was. McVeigh has done us all a great service by reminding us of how banal evil can be and how easily we can all be duped by people wearing collars that denote piety.

It was far from piety that was on their minds, however, and McVeigh does well reminding us of that fact. This is a smashing read.

"Stolen Faith" by James McVeigh is available via O'Brien Press.