The man who fomented more upheaval and denial of the 2020 election than anyone is Steve Bannon, the Irish American sinister force behind much of President Trump’s post-election strategy. 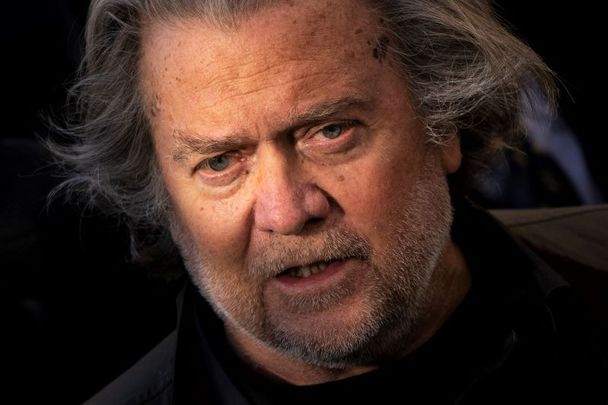 November 15, 2021: Former Trump Administration White House advisor Steve Bannon speaks to the press on his way out of federal court in Washington, DC. Bannon was charged with two counts of contempt of Congress after refusing to comply with a subpoena from the House Select Committee investigating the January 6 attack on the U.S. Capitol. Getty Images

Steve Bannon will be back in the limelight where he loves to be at the January 6 House hearings, and we can be certain the old bolloxology he has sprouted to date will be rethreaded like an old carpet.

Bannon lies like some people breathe; the more fanciful the better. He might not appreciate being linked with Lord Haw-Haw, the Nazi propaganda voice beamed into Europe during World War II, but there are similarities.

That voice belonged to an Irishman too. His name was William Joyce.

It is extraordinary that a political anarchist like Bannon became so influential and close to the seat of power as he did, serving as counselor to Donald Trump in the White House for seven months before the inevitable breakup.

It now appears, according to The Washington Post, that Bannon and his not-so-merry pranksters were first to fire up the faithful shattered by the Trump loss to Joe Biden who were looking for a convenient excuse to become disbelievers instead of facing the truth.

He certainly did his best to inflame the attempted overthrow of a fair and free election. It seems now there was another Irish American flamethrower at work, previously concealed.

The Post reports that the first clarion call to deny the legitimate election results was made on Bannon’s podcast by another Irish American, former Trump Cabinet secretary, lawyer Bill McGinley, an election specialist who had worked with Jones Day, the Republican law firm that later litigated the case for the election being rigged in 2020 before decency forced the firm to stop.

Like all good propagandists, Bannon was a hidden hand at times. As the Post reported, “Even as Bannon has denied responsibility for the violence that took place on January 6, he considers himself an ideological architect of the efforts to overturn the election.”

He takes personal credit for turning out the huge numbers at the Stop the Steal rally that led to the riot and five deaths.

“We saved Trump,” Bannon said in his interview with the Post. “If it hadn’t been for War Room (his podcast),” he added, Trump would never have fought the results.

Bannon believes he is the leader of the fightback and he may well be right. His platform on Apple has more than 200 million total downloads.

But Bannon and Trump needed a fig leaf to cover up their coup.

Enter McGinley, who stated on the September 25, 2020 War Room broadcast about possible January 6 scenarios, “What happens on January 6th, let’s say for whatever reason, there is a complete meltdown in the process in one or more states, it’s still tied up in the courts and litigation has maybe gone up and down to the Supreme Court, there is no clear winner … and there’s just serious questions about which candidate or the electoral college slate won the vote.

“You trigger what’s called a contingent election. And that means that the House of Representatives is to immediately take up the question: Who should be president of the United States?”

Soon the drumbeats rolled. Trump said at a subsequent Pennsylvania rally, “We have an advantage if we go back to Congress. Does everyone understand that?”

Everyone did, and soon the cabal of Rudy Giuliani, John Eastman, Jenna Ellis, etc. was on it, with Bannon attending one meeting.

The rest is history, dear reader, as anarchy, death, and destruction were spread across Washington, D.C. on January 6, 2021 as a result of the Stop the Steal lies which are as bogus as a three dollar bill. No doubt our Irish heroes Bannon and McGinley were fist pumping somewhere.