After his first court appearance since being indicted, Steve Bannon said "this is going to be the misdemeanor from hell for Merrick Garland, Nancy Pelosi, and Joe Biden." 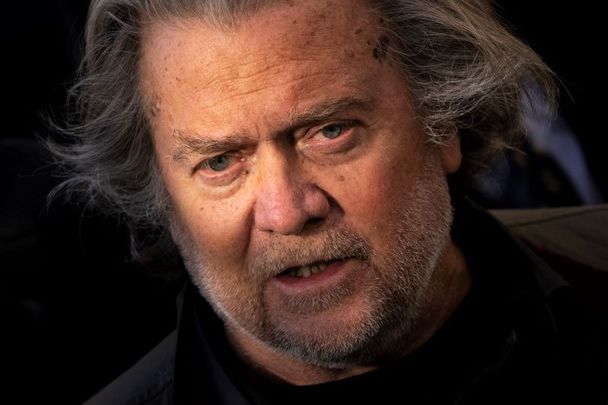 November 15, 2021: Former Trump Administration White House advisor Steve Bannon speaks to the press on his way out of federal court in Washington, DC. Bannon was charged on Friday with two counts of contempt of Congress after refusing to comply with a subpoena from the House Select Committee investigating the January 6 attack on the US Capitol. Getty Images

Stephen Bannon, 67, turned himself to authorities on Monday, November 15 after being indicted last week on charges in relation to his alleged involvement with the attack on the US Capitol on January 6.

Bannon's arrival at the FBI's field office in Washington, DC on Monday was live-streamed through his 'War Room' account on the social media platform Gettr.

As Bannon exited his vehicle, one person was seen holding a poster saying “COUP PLOTTER."

Briefly addressing his supporters on the live stream before heading inside, Bannon said: "I don't want anybody to take their eye off the ball of what we do every day.

He added: "I want you guys to stay focused, stay on message. Remember, signal not noise. This is all noise, that’s signal."

Bannon appeared before Magistrate Judge Robin Meriweather at the federal courthouse. He did not enter a plea. Prosecutors did not request that Bannon be detained; he was released without bail but is required to check in weekly with court officials and had to surrender his passport. He is expected to return to court and be arraigned on Thursday, November 18.

Speaking alongside his defense attorney David Schoen upon leaving the courthouse on Monday, Bannon said: “You see these signs right here saying insurrection and all that? That's what this country’s about, it's freedom of speech, they got their opinions, we have our opinions.

“I'm telling you right now, this is going to be the misdemeanor from hell for Merrick Garland, Nancy Pelosi, and Joe Biden.

"Joe Biden ordered [Attorney General] Merrick Garland to prosecute me from the White House lawn when he got off Marine One.

“By the way, you should understand, Nancy Pelosi is taking on Donald Trump and Stephen Bannon, she ought to ask Hillary Clinton how that turned out for them. We’re going on the offense.

He later said: “By the way, not just Trump people and not just conservatives, every progressive and every liberal in this country that likes freedom of speech and liberty should be fighting for this case.

“That’s why I’m here today, for everybody. I’m never going to back down. They took on the wrong guy.”

Schoen claims that Bannon was instructed by his lawyer to not show up in court.

“Nancy Pelosi, Merrick Garland, Joe Biden, the whole, all of them.”

Schoen said: “What he means by offense is, we’re going to challenge this affirmatively. We’re going to fight to defend his rights and to defend your rights also.”

Each count of contempt of Congress carries a minimum of 30 days and a maximum of one year in jail, as well as a fine of $100 to $100,000. A federal district court judge will determine any sentence after considering the US Sentencing Guidelines and other statutory factors.

"According to the indictment, Mr. Bannon refused to appear to give testimony as required by subpoena and refused to produce documents in compliance with a subpoena.”

In its subpoena, the Select Committee said it had reason to believe that Bannon had information relevant to understanding events related to January 6.

Bannon, formerly a Chief Strategist and Counselor to the President, has been a private citizen since departing the White House in 2017.