It is highly likely that one of the two parties, Fianna Fáil or Fine Gael, has signed its death warrant by coming together as surely as Michael Collins did when he signed the treaty. 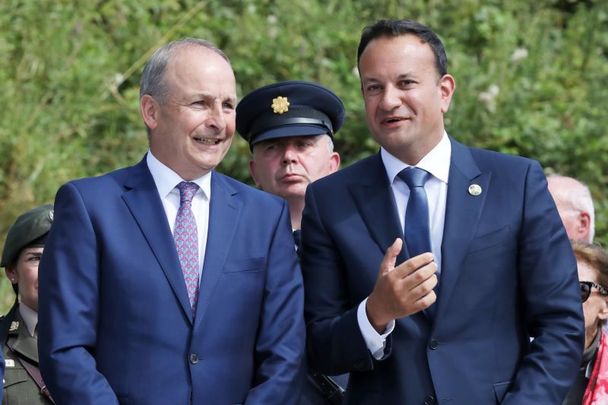 There has been a rush of commemorations of the Civil War period in Irish history, culminating with an estimated crowd of 10,000 turning up at the Michael Collins monument in Cork to see Fianna Fáil and Fine Gael, the two parties that grew out of the 1922-‘23 Irish Civil War, bury the hatchet.

It was a highly charged moment, the culmination of decades of edging closer together until only bitter memories of the death of Collins and the eventual triumph of his archrival, Éamon de Valera, separated the parties. There was a visceral dislike of the other party, and so a great moment of conciliation at Béal na Bláth healed a fissure in Irish life there for almost 100 years.

Yet it is highly likely that one of the two parties, Fianna Fáil or Fine Gael, has signed its death warrant by coming together as surely as Michael Collins did when he signed the treaty.

The factors that kept Fianna Fáil and Fine Gael apart at the beginning were obvious. Both parties were unlikely to show much conciliation as an estimated 4,000 Irish men and women died in the Civil War, over less than a year, a figure that is higher than the 3,500 or so killed in The Troubles over thirty years in the North. The hatred ran deep and strong.

But it became obvious with the passage of time and the departure from the scene of the Civil War generation that there were fewer and fewer differences between the two parties, Fianna Fáil having more rural support while Fine Gael did better in urban parts.

There was broad agreement on economic policy, The Troubles, and homage to the Catholic Church, so younger voters who had no experience of the Civil War animosities became far less hardline in their views.

Now the ultimate inflexion point has been reached. In order to form a stable government and keep Sinn Fein out of power, the former bitter rivals Fianna Fáil and Fine Gael coalesced in power.

The final step in the demise, finally, of Irish Civil War politics occurred at the Collins commemoration when Micheál Martin became the first Irish taoiseach from the Fianna Fáil tradition to embrace Collins.

Taoiseach Micheál Martin says perhaps the greatest tragedy of Michael Collins' death is "that it deprived us of our best hope for reconciliation." pic.twitter.com/pVcC09iyAF

So what happens now? With Sinn Féin resurgent but likely lacking the ability to win enough seats on its own, they may well go shopping for a political partner after the next election.

It is a remarkable reverse. Both Fianna Fáil and Fine Gael grew out of the split in Sinn Féin over the treaty. Now, finally, 100 years later, Sinn Féin are back on the cusp of power according to the opinion polls.

Fianna Fáil, with its more Republican tradition, would seem to be the obvious choice, but Irish politics, like in America, have become incredibly volatile.

Take, for instance, the Irish Labour Party, once an omnipresent in many governments which now has only enough TDs, a total of seven, to fill a minivan.

Facts are, Irish voters have been very harsh on smaller parties in coalition. That reality leaves Fine Gael and Fianna Fáil on the edge of a precipice. Refuse to jump on board the Sinn Féin juggernaut and risk political oblivion, or jump on board and possibly end up like the Labour Party.

There are few good choices, but barring a next election shocker, the future of Irish politics will be one with either a greatly weakened and irrelevant Fianna Fáil or Fine Gael. That was the grim reality behind the handshake with the devil at Béal na Bláth this month.

*This column first appeared in the August 31 edition of the Irish Voice newspaper, sister publication to IrishCentral.