A chapter in Irish history came to an end when the leaders of Fianna Fáil and Fine Gael, deadly opponents when first created by the Irish Civil War, spoke together at the 100th anniversary of Micheal Collins's death. 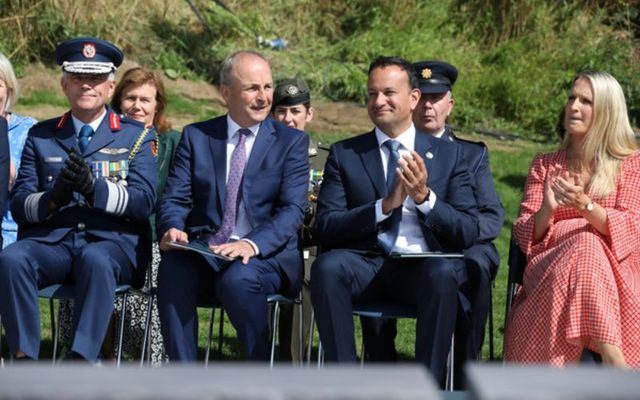 Fianna Fáil's Micheál Martin (left) and Fine Gael's Leo Varadkar (right) sit side by side at a ceremony honoring the 100th anniversary of the death of Michael Collins in Béal na Bláth, County Cork. Rolling News

Taoiseach Micheál Martin made history on Sunday by becoming the first serving Fianna Fáil Taoiseach to speak at the commemoration of Michael Collins's death in Béal na Bláth in County Cork.

Martin was speaking at an event marking the 100th anniversary of Collins's death, which occurred on August 22, 1922, during an ambush by members of the anti-treaty IRA.

More than 5,000 people attended the commemoration at the site of the ambush in Béal na Bláth, including Tánaiste and Fine Gael leader Leo Varadkar and Minister for Defence Simon Coveney.

Addressing the 5,000-strong crowd, Martin described Collins as "one of the great heroes of Irish history, a man who played an irreplaceable role in securing Irish freedom".

"It is perhaps the greatest tragedy of Collins' death that it deprived us of our best hope for reconciliation," Martin said.

"The bitterness which grew out of the events of the following year showed how much was lost in this place."

Martin praised Collins's compassion during the speech, describing him as one of the greatest Irishmen to have ever lived.

Taoiseach Micheál Martin says perhaps the greatest tragedy of Michael Collins' death is "that it deprived us of our best hope for reconciliation." pic.twitter.com/pVcC09iyAF

Varadkar described Collins as a "prophet of freedom", adding that he was both a "realist and an idealist". Varadkar also said Collins's life was a "profile in courage".

Eleanor Moore, a great-grandniece of Michael Collins, also addressed the commemoration, thanking everyone for attending and stating that the weekend had been "amazing for the family".

Martin and Varadkar then laid wreaths at a memorial dedicated to Collins, which was followed by a moment's silence and a performance of the Piper's Lament and the Last Post.

The ceremony concluded with a powerful and emotional performance of Amhrán na bhFiann, which received a rousing round of applause.