Where are The Big Fellas mugshots? Dermot McEvoy believes they don’t exist because they were never taken; Collins' survival depended on his anonymity. 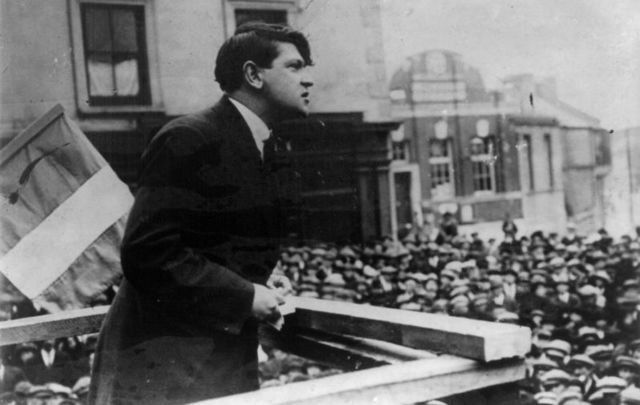 A look back on the character Michael Collins - "The Big Fella" - and his incredible life story.

Where are The Big Fella's mugshots? They don’t exist because they were never taken.

One of the great mysteries concerning the Easter Rising – and the subsequent arrest of its participants – is why didn’t the British photograph their prisoners? As someone who has written two books on Michael Collins, who was assassinated nearly 100 years ago, this has always bothered me.

"Why?" because Collins’ survival depended on his anonymity. With a £5,000 (sometimes embellished to £10,000) bounty put on his head by Winston Churchill, Collins walked about the streets of Dublin at the height of the terror in 1919-20 and almost never feared for his survival. There are many reasons for this.

Collins believed that if you didn’t look guilty you had nothing to worry about. He always dressed impeccably and carried an attaché case. He was a businessman. Why would the British bother a busy businessman?

When he went into the Great Brunswick (now Pearse) Street Dublin Metropolitan Police Station on April Fool’s Day 1919 to read his file, he discovered that they had a poor photograph of him taken in profile. He promptly pinched it, which left them with no picture at all.

Collins was also the perfect chameleon. I have never seen someone who could change their facial appearance so dramatically. The differences between the scowling Collins and the laughing Collins are so great that they are like two different, distinct people. This is especially evident in the official photograph of the members of the First Dáil where Collins has an absolute look of disgust on his face. 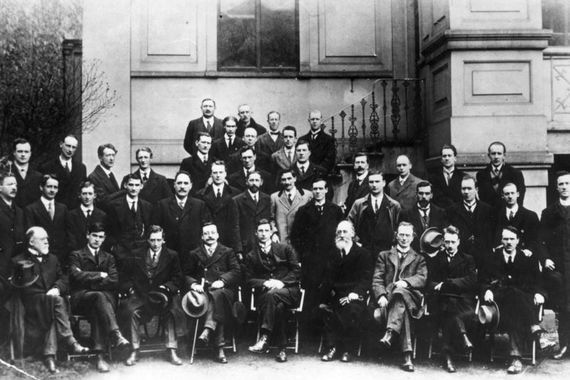 Collins never missed a wedding. The tradition at the time was that the entire wedding party lined up to be photographed. Collins, always the perfect guest, duly lined up with everyone else, but when the photographer said “watch the birdie” Collins always dropped or turned his head. I have seen at least five or six of these photos from different weddings.

However, the biggest mystery regarding the missing mugshot goes all the way back to the Easter Rising. After the rebels were rounded up they were taken to Richmond Barracks for processing. There they were separated into elites and non-elites. Legend has it that Collins saw that the elites were probably going to be shortly staring down the barrel of a rifle and crossed the room and lined up with the non-elites. Shortly thereafter he was shipped off to Stafford Prison in England and then Frongoch Prison Camp in Wales.

There are a few clues as to what happened at Richmond Barracks. Vinny Byrne, one of Collins’ "Twelve Apostles,” said in his witness statement that he was fingerprinted while at Richmond Barracks. Thanks to his young age he was soon sent home to his mammy – a dramatic blunder on the part of the British.

After all the research I’ve done over the years (reading many witness statements) I have come to the conclusion that the British, in their rush to execute the leaders and deport the rest, simply did not take mugshots of the participants. And this would be natural because the British would have processed thousands in the days after the Rising.

In 2016, the Irish Times reported that rare mugshots from 1916 were going on sale. The Irish Times did not say where these mugshots have been, but one can guess that they were in someone’s attic for the last hundred years.

These mugshots are important because they contain the photographs of two of Collins’ closest associates: Liam Tobin (#4 W. Tobin) and Piaras Béaslaí (#6 P. Beazley), who was Collins’ first biographer. Tobin was one of the most important members of the IRA in Dublin in 1919-20. This is because he was the Assistant Director of Intelligence (Collins was the chief) with an office at #3 Crow Street in Dublin. The office is a mere two blocks from Dublin Castle but was never discovered by the British.

I decided to check the witness statements of both Béaslaí and Tobin. Béaslaí’s shed no light whatsoever. Tobin’s statement, however, told his 1916 story. (Surprisingly his statement ends after his incarceration and he never mentions his work for Collins.)

During the Rising, Tobin fought at the Four Courts before his unit's surrender. He was taken to Richmond Barracks to be questioned and processed. For some reason Tobin, a regular foot soldier in the Volunteers without rank, was singled out, sent to Kilmainham Gaol, and sentenced to death, which was immediately commuted to penal servitude. (His harsh treatment may have been because he fought at the Four Courts under Commandant Ned Daly and they had given the British a brutal time.)

The Irish Times speculates that the mugshots, including those of Tobin and Béaslaí, “were taken at Richmond Barracks in Dublin – a British army facility in Inchicore where most of the rebels were taken after the Rising. It is believed that the photos were taken by the Dublin Metropolitan Police, who were called on to assist the military in processing the detainees.”

I disagree with this. Tobin was then removed to Mountjoy Gaol for a while before being deported to Britain. He makes no mention of being photographed while at either Richmond Barracks or Kilmainham Gaol. But when he moved to Mountjoy he was “received by warders, had a bath and the usual prison routine gone through.”

Could that “usual prison routine” included the taking of mugshots? I think so because both Richmond (a military facility) and Kilmainham (an antique of a prison even in 1916) were not equipped with the photographic equipment to take mug shots. Mountjoy, of course, would have had such equipment.

So where are Michael Collins’ mugshots? With a great degree of certainty, I can speculate that they don’t exist because they were never taken. Collins, like many of his fellow GPO rebels, was quickly processed at Richmond Barracks and taken to the North Wall for his voyage on the cattle boat to England.

The British, in their rush for vengeance, probably only photographed a handful of their 3,000 prisoners, mainly those few who were sent to Mountjoy Gaol like Tobin. This blunder, in less than six years, would cost them their first colony, Ireland.