Senator Chris Murphy of Connecticut has emerged as a leader in Congress calling for commonsense gun reform after yet another elementary school shooting. 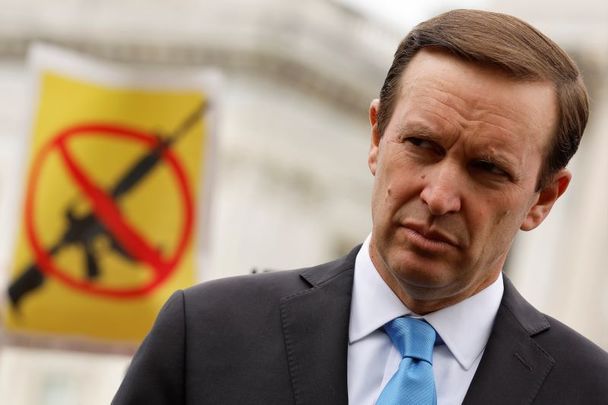 No prizes for guessing who has been the most impressive senator in the heated debate over gun regulation after the latest massacre of the innocent in Texas last week.

Taking the fight to the floor of the U.S. Senate, Democratic Senator Chris Murphy of Connecticut on bended knees pleaded with his Republican colleagues to come together with Democrats on a bill tightening gun laws.

He stated, “What are we doing here? This is a choice, it only happens in this country and nowhere else.”

Afterward, speaking to the press, he did not mince words when addressing the GOP’s idea of a solution.

"Spare me the bulls*** about mental illness,” Murphy said. “We don’t have any more mental illness than any other country in the world. You cannot explain this through a prism of mental illness because we’re not an outlier on mental illness…We’re an outlier when it comes to access to firearms and the ability of criminals and very sick people to get their arms on firearms. That’s what makes America different.”

Murphy knows better than any other senator the true cost of not regulating firearms. The 2012 Sandy Hook massacre in his home state, where 20 first-graders and six adults were shot to death in their school, was more than a massacre to him. He represented the district in Congress and recalls the terrible trauma he witnessed.

After the shootings, Murphy stood with the devastated parents who would never hug their children again.

“There are a lot of days when I wish that I hadn’t heard the things I heard or seen the things I saw that day. It was a feeling of helplessness that’s hard to describe,” Murphy said of the shooting.

“These parents, they’re my age, their kids are my kids’ ages.”

The ordeal turned Murphy into the gun lobby’s biggest enemy in Congress. He proudly brandishes his “F” grade from that lobby as a motivating factor, a sure sign he has begun to worry them.

He is fighting a huge battle. As a New York Times editorial mentioned, the cause is a daunting one even as the editorial writers singled out Murphy for his determined efforts.

“There have been 213 mass shootings in the United States in the first 21 weeks of 2022. An average of 321 Americans are shot every single day. And every day, there are roughly more than 50,000 gun sales recorded,” the editorial noted.

Murphy somehow remains undaunted and is currently leading a bipartisan effort in Congress to finally break the code of violence and allow some progress to be made on common-sense federal gun control regulations.

His high profile as the conscience of the Senate on this issue will inevitably raise questions about his political future. Lord knows the Democrats could benefit mightily from a fresh face on the bench, and at just 48 years of age, Murphy seems well suited for the task. President Biden is 79, House Speaker Nancy Pelosi is 82, Majority Leader Steny Hoyer is 83 this month, and House Majority Whip Jim Clyburn is 82.

It is simply too old a coterie, and a young, committed, hard-driving senator from Connecticut should definitely be in the reckoning.

Though only 48, Murphy is a veteran legislator who has served in both houses of the Connecticut Legislature and as a member of the House before taking Joe Lieberman’s old Senate seat.

Being Irish and Polish will do him no harm among ethnic Americans. He has flown to Britain and Ireland in recent times to argue against Brexit. He was outspoken about Vladimir Putin even when Donald Trump was puckering up to him.

But it is Murphy’s non-stop work on gun laws that define him. He was chairing the Senate when the nightmare in Uvalde struck last week.

Murphy told NBC talk show host Seth Meyers that he felt he had to react. “I decided to go down to the floor immediately after and simply say to my colleagues, ‘Why on Earth did you spend all this time running for the United States Senate if you’re going to do nothing?'”

The same question is still being asked all over the country. Murphy seems to be the only legislator making a concerted effort to lessen the body count of elderly black people in Buffalo and little children in Texas.

He has shown leadership and courage and may well have catapulted himself into the ranks of the very few Democrats who could successfully run for president. He’d be a very serious contender.