WATCH: “This only happens in our country” - Senator begs for action after latest school shooting

Chris Murphy (D-Conn) gave an impromptu speech on the Senate floor on Tuesday after 19 people, mostly children, were shot and killed at Robb Elementary School in Uvalde, Texas. 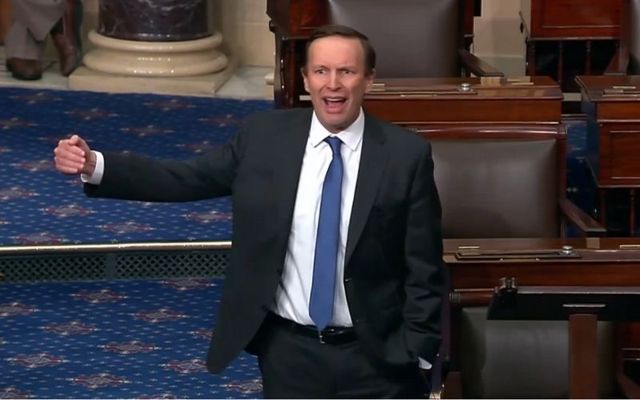 At least 19 children and two more adults are dead today in America after yet another elementary school shooting, this time at Robb Elementary School in Uvalde, Texas, which instructs second through fourth grades.

This is at least the 30th shooting at a K-12 school in the US in 2022, CNN reports. It is the deadliest shooting at an elementary school in the US since the December 2012 attack at Sandy Hook Elementary School in Newtown, Connecticut where 26 people - 20 children between the ages of six and seven, and six adult staff - were shot and killed.

Now a Senator, Chris Murphy was a Representative in 2012 for the Connecticut district where Sandy Hook Elementary was located. He has fought for legislative action on gun control ever since.

On Tuesday, Murphy said he was "shaking all over" after learning about the latest elementary school shooting.

Oh my god. I’m shaking. I’m just shaking all over. With fear. With anger. With resolve. https://t.co/Pt9u86KtJs

Murphy took to the Senate floor to deliver an emotional impromptu speech.

"There are 14 kids dead in an elementary school in Texas right now," Murphy said on Tuesday.

"What are we doing? There are more mass shootings than there are days in the year.

"Our kids are living in fear every single time they set foot in a classroom because they think they're going to be next.

“What are we doing? Why do you spend all this time running for the United States Senate? Why do you go through all the hassle of getting this job, of putting yourself in a position of authority, if your answer is that as the slaughter increases, as our kids run for their lives, we do nothing?

"What are we doing? Why are you here if not to solve a problem as existential as this?

"This isn't inevitable. These kids weren't unlucky. This only happens in this country, and nowhere else. Nowhere else do little kids go to school thinking they might be shot that day.

"Nowhere else do parents have to talk to their kids, as I have had to do, about why they got locked into a bathroom and told to be quiet for five minutes just in case a bad man entered that building.

"Nowhere else does that happen except here in the United States of America and it is a choice. It is our choice to let it continue.

"What are we doing?"

"Why? Why are we here? If not to try to make sure that fewer schools and fewer communities go through what Sandy Hook has gone through, what Uvalde is going through?"

He continued: "I am here on this floor to beg, to literally get down on my hands and knees and beg my colleagues. Find a path forward here. Work with us to find a way to pass laws that make this less likely.

"I understand my Republican colleagues will not agree to everything I support, but there is a common denominator that we can find. There is a place where we can achieve agreement."

Murphy acknowledged that action "will not solve the problem of American violence by itself, but by doing something, we at least stop sending this quiet message of endorsement to these killers whose brains are breaking who see the highest levels of government doing nothing shooting after shooting."