New York Governor Kathy Hochul says "there has to be a limit or at least a responsibility on social media platforms" in the aftermath of the mass shooting in Buffalo on May 14. 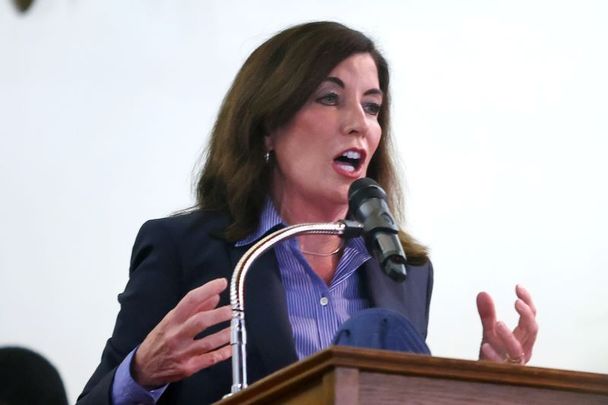 May 15, 2022: New York Governor Kathy Hochul, a Buffalo native, speaks during an interfaith service at Macedonia Baptist Church held to mourn the Tops market shooting victims in Buffalo, New York. The attack was believed to be motivated by racial hatred. Getty Images

Kathy Hochul, the Governor of New York and a proud Irish American, is hitting out against white supremacy on social media in the wake of the supermarket shooting on Saturday, May 14 in her hometown of  Buffalo.

Payton S. Gendron, 18, of Conklin, New York, has pleaded not guilty to one count of Murder in the First Degree for his allegedly opening fire at Tops Friendly Market in Buffalo, New York on May 14.

Gendron, wearing tactical gear and armed with an assault weapon, allegedly live-streamed his fatal attack on the social media platform Twitch, which has since said that the graphic video was taken down in less than 2 minutes.

After Gendron was arrested on Saturday, "a manifesto believed to have been posted online by the gunman emerged, riddled with racist, anti-immigrant views that claimed white Americans were at risk of being replaced by people of color," The New York Times reports.

“The Justice Department is investigating this matter as a hate crime and an act of racially-motivated violent extremism,"  Attorney General Merrick B. Garland said on Saturday.

Investigators have uncovered information from search warrants and other methods indicating the alleged shooter was "studying" previous hate attacks and shootings, CNN reports.

Gendron, who was remanded without bail, is set to face a felony hearing this Thursday, May 19. If convicted, he faces a maximum sentence of life in prison without parole.

In the aftermath of the mass shooting, Governor of New York Kathy Hochul is speaking out against white supremacy and is calling upon social media platforms, political leaders, and mainstream commentators to do more.

Speaking with Kiss 98.5FM in Buffalo on Monday, Hochul said: “There was a time when white supremacists covered their identity by wearing hoods and riding on horses terrorizing people. Now, white supremacists with the same hatred in their hearts are anonymous because they’re on the Internet, they’re hiding in their basements. They’re spewing the same amount of hate.

“When you incentive and inspire someone to do what this individual did, he learned that from the Internet, social media platforms that replicated information from previous acts like this.

"There was a massacre in New Zealand; if you look at the language that that individual put out there, talking about his intention and his motives and what his objectives were, it’s almost identical.

“We have to recognize that yes, we support free speech, we cherish our first amendment freedoms, but there has to be a limit or at least a responsibility on social media platforms. When this hate speech is posted, they need to notify authorities and take it down.

“You don’t have a right to incentive or to have incendiary language that’s going to cause people to do harm to others. That’s not protected speech.

“It is going to continue to be a battle, but this is a whole new frontier for fighting racism, and hate speech, and white supremacy. That’s exactly where we are now.

“We need elected leaders and commentators on all networks to be calling it out for what it is. It is blatant racism, it is hate speech, and it’s part of a white supremacy national movement that is now global.”

Gendron had previously made threats at his high school, which led to a psychiatric evaluation but, with no specific threat, Gendron was cleared. Hochul said “we need to question” why the suspect was able to purchase a gun after that.

I stand united with 20 million New Yorkers when I say: White supremacist violence and terrorism has no place in Buffalo and no place in New York State. We will continue working to combat hate wherever it rears its ugly head. pic.twitter.com/OpqLrZTny3

Later, Hochul said: “This should start a national movement against this hate speech because it has now gone mainstream. This is a consequence when hate speech goes mainstream. When you look it up, there are members of Congress using these white supremacist theories, there are people on mainstream cable shows using this language, as well as what’s happening on social media platforms.

“The movement of this generation should be to stop that from spreading, to insist that their leaders call it out, and well as to work with us to strengthen national gun laws so we can protect our citizens.

"Yes, there is a second amendment right, yes that is protected, I understand the right for recreational sport … but there are boundaries and no one should ever be able to have an assault weapon in their hand that is capable of military-style execution like we saw in a parking lot in Buffalo, New York on Saturday.

“This is a moment to stand up. I want the rest of the nation to someday recognize Buffalo as one of the last places where hate inspired massacre. This was racially motivated. This person intended to kill Black New Yorkers, that was the whole objective, he wanted to kill Black New Yorkers. This has to be the last stop for that because we need to rise up and call it out and continue to insist that our leaders give the same response as well.”

Jill and I will travel to Buffalo on Tuesday to grieve with the community that lost ten lives in a senseless and horrific mass shooting.