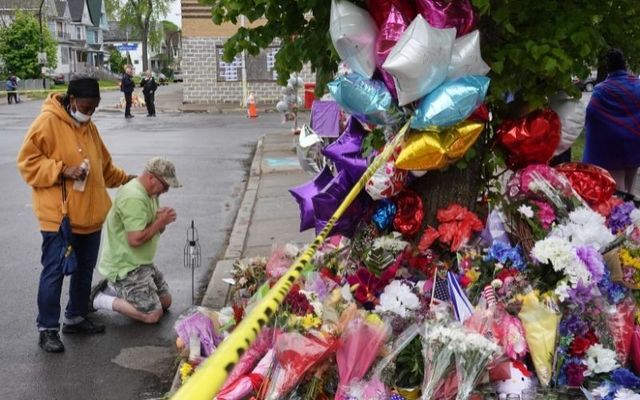 MAY 18: People visit a makeshift memorial set up outside the Tops supermarket on May 18, 2022, in Buffalo, New York. Getty

Polls show that over 90 percent of Americans, including the vast majority of gun owners, and sensible members of the Republican Party, support universal background gun checks. Such laws have been blocked by Congress at the behest of the gun lobby, one of the most powerful forces in America.

That refusal to seek universal background checks led to the horrific mass shooting in Buffalo last weekend when an 18-year-old, who had previously been questioned by police about his extreme views, was able to carry out a massacre of innocent people with a legally held gun.

It was not just any gun. The weapon used was the Bushmaster XM-15, an assault rifle, the very same model that was used in the massacre of innocent children at Sandy Hook, Connecticut in 2012. The gunman had even altered the structure of the rifle to make it possible to shoot more bullets.

The failure of our gun laws is everywhere to be seen.  The situation just seems to get worse, with mass shootings seemingly on a monthly basis these days.

It is sheer madness to allow a troubled and deeply racist teenager to purchase such a weapon legally and then use it to gun down innocent people, mostly elderly women out grocery shopping for their families.

The gun lobby exemplifies the tragic inability of politicians to come up with concrete solutions to major American problems.

It is minority rule at its worst, as we see in the looming Roe v. Wade Supreme Court ruling, even though 70 percent of the country approves of Roe.  But the U.S. Senate failed to pass an abortion bill that would make the will of the people into government policy.

Like with Roe, we have the same weasel word politicians now talking about how guns are not responsible for gun violence and failing to acknowledge that alone in the Western world, America permits its citizens to shoot and murder fellow Americans with the greatest of ease.

The cover for all this is the Second Amendment in the U.S. Constitution which makes it legal to carry arms.  Though the amendment is by no means clear, it has been used remorselessly by the gun lobby to allow for more weapons with as little oversight as possible, and to hell with the consequences.

America has become a battlefield, one where elderly black women are legitimate targets in the twisted mind of an 18-year-old whose manifesto shows a racist, ultra-extreme domestic terrorist who had nothing to stop him when he began his rampage.

The fact that he instanced the great replacement theory as his main motivation must have sent shivers down the spine of the right-wing politicians who have pushed this nonsense that immigrants are coming to replace American voters.

The massacre must have especially rattled the hosts at Fox News who continuously propagate replacement theory as fact.

New York Times journalist Nicholas Confessore recently did a deep profile of Fox host Tucker Carlson, king of the far right media, and discovered that the great replacement theory had been mentioned or discussed in 400 episodes of Carlson’s nightly show.

Carlson brought the theory into the mainstream and is clearly supporting it and using it as yet another way to keep his viewers angry and disgusted about immigrants coming to America.

Carlson is not alone.  Several right-wing Republicans must be ashamed to look in the mirror these days and see the type of violence and destruction that they have helped to create.

America has always had a complicated relationship with guns, but in the modern day, it is clearly not working when such a dominant lobby replaces the opinions and desires of millions of American voters to tighten gun control laws.

Until something dramatic is achieved on that front, we can expect our monthly massacres to continue.