Ronald Reagan believed he was of British background and tried to steer away from his Irish roots when running for president. 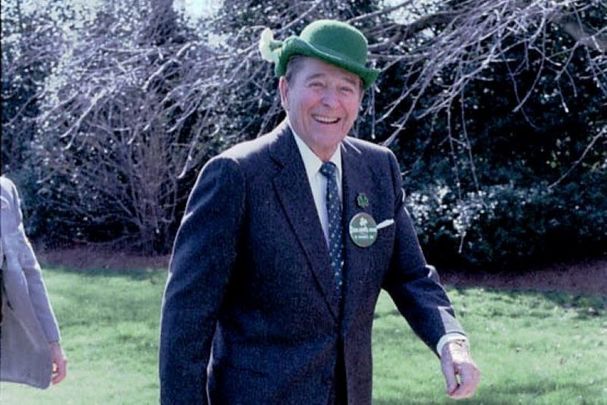 According to former Irish Ambassador to US Sean Donlon “(Ronald) Reagan always believed that his ancestry was British. This suited him politically and it suited him so socially to believe.” (It also apparently suited his wife, Nancy, an Anglophile.)

Reagan also told Donlon, in no uncertain terms,  there was no way he would help out in ending the IRA hunger strike  in 1981 when ten prisoners led by Bobby Sands died,

Donlon was interviewed for an oral history on Ted Kennedy’s life and career, carried out by the University of Virginia Oral History Project which has recently come to light.

Also present were former Taoiseach Garret FitzGerald and former Department of Foreign Affairs senior official Michael Lillis. Though the interview is undated, it occurred when Albert Reynolds was Taoiseach from 1992 to 1994.

Donlon stated when asked about Ronald Reagan “I met Reagan through Bill Clark (former Reagan cabinet member and National Security Advisor)during the campaign for the Presidency in 1980. I met him (Reagan)out in California and in a social way just said to him, “By the way, what part of Ireland are you from?” Telling him that if he was a Reagan it’s got to be maybe from Cork, or wherever, or Tipperary.

He said, “No, no, no.” I challenged him and he said he would send me a copy of his family papers. His brother, Dr. Neil Reagan, sent me a bundle of papers, which in fact showed that the grandfather was born in London. I got two sources to investigate that. One was the Office of the Chief Herald..(it)  established the Tipperary connection with Ronald Reagan. (His ancestors had left the little village of Ballyporeen).

Donlon stated. “So with great glee I went to Reagan with this information probably in September—the election was November—thinking he’s going to make a big thing out of this. He asked me to keep it quiet. [laughter] “People will think that I’m jumping on the Irish cart and bandwagon,” Reagan said.

Donlon went on to say:  “Bill Clark subsequently told me that evening, he said to me, “It doesn’t fit in with the line and the image that he’s projecting. He’s a Republican. He’s going for the WASP [white Anglo-Saxon Protestant] vote. There’s no way he’s going for the Irish-Catholic vote except on abortion.”

“ I was asked to keep it quiet and told that if I kept it quiet until the election was over, Reagan would acknowledge it by coming to the Embassy on St. Patrick’s Day.

He won the election and he was inaugurated  (he) agreed to come and acknowledge his Irish-ness on St. Patrick’s Day. Then using Bill Clark, whose first appointment was as Deputy Secretary of State, which gave him a role, we reminded Clark that (Jimmy) Carter had made a commitment to Ireland and that we would like this commitment continued. That was agreed.

Donlon stated Reagan was good for Ireland. “Reagan, overall, in my opinion, was a constructive influence. .. There was one occasion when he refused point blank to be engaged, which was when, in 1981, we had hunger strikes in Northern Ireland and the IRA people were dying. Again, this was a complete coincidence.

“They were persuaded to do it in the embassy. It was very hot. I think it was the month of July..

“So I spoke directly to Reagan about, would he intervene with Thatcher to end this extraordinary hunger strike?

In the oral history, Garret FitzGerald then ran through the difficulties surrounding the hunger strikes but said they were close to a deal on it.

FitzGerald stated: “That’s what we needed Reagan’s support for, not to give in to the strike but to revive the deal, which had actually been informally agreed to on the spot, as we understood from the British Minister. I made the mistake of asking Sean to ask Reagan to—but it wasn’t really fair to expect him. It was too complicated an issue. It involved getting the British about—a political thing and the IRA, and criminals."

(In the oral history Sean Donlon took over the narrative from there.)

Donlon stated: “Reagan’s point to me was very direct and almost heated. It was the first time I’d had a heated conversation with him. It had nothing to do with Irish affairs or Anglo-Irish affairs."

The hunger strike claimed ten lives but Sands on his deathbed was elected to the British Parliament and Sinn Fein’s drive into politics originated from there.

On This Day: Albert Reynolds, who became Taoiseach, is born in 1932