Forty years after Pope John Paul skipped Northern Ireland and 20 years since the Good Friday Agreement, in 2018 Francis must make a visit his priority. 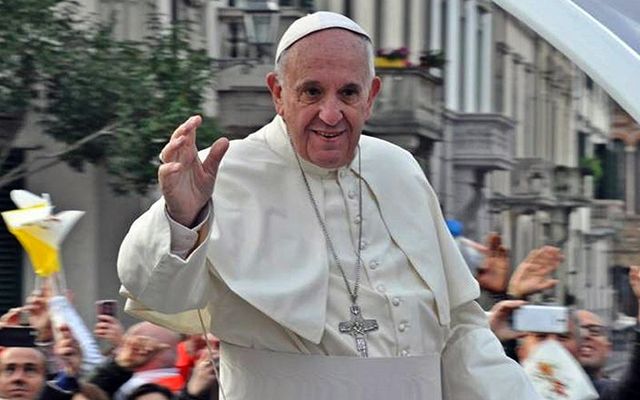 Pope Francis must make it his duty to visit Northern Ireland in 2018. Zebra48bo / Creative Commons

Forty years after Pope John Paul skipped Northern Ireland and 20 years since the Good Friday Agreement, in 2018 Francis must make a visit his priority.

When Pope John Paul came to Ireland in September 1979 literally half of the people in the Irish Republic turned out to see him.

But he was a no show in the North.

Sectarian tensions were running high and Ian Paisley, in his pre-peacemaker incarnation, was threatening thunder and the anger of the Gods.

There is no excuse this time.

A cold peace has reigned since the Good Friday Agreement. Imperfect but we’ll take it.

So why no visit north?

The pope and the Vatican need to learn from Queen Elizabeth when she strode off the plane into the Republic and helped them commemorate the Easter Rising of all things.

Francis cannot dodge this one. Faith of our fathers is very strong in the North due to the troubles and the brave clergymen like Tomas O'Fiaich and Alex Reid who stood up to the British.

Northern Catholics need to be recognized and rewarded. Likewise, unionists need to see the pope may be able to issue papal bulls, but he has no horns.

There are signs the church is growing some cojones. It was a no go until Wednesday when Archbishop of Dublin Diarmuid Martin sparked hope that Pope Francis will after all, make a trip to the North.

The North’s awake. “I think what you are seeing is a realization of the disappointment that there is as the visit is scheduled at the minute,” said Michael Kelly, Editor of the Irish Catholic newspaper, the Irish News.

“The northern Bishops have been impressing this upon their southern colleagues and I know they are trying to make their voices heard.”

Archbishop Martin did not completely rule out a section of the trip taking to Northern Ireland when speaking of the visit to RTÉ News and the Irish Times.

The main reason for Pope Francis’s visit to Ireland is to attend the World Meeting of Families, hosted by Archbishop Martin in Dublin this summer. He’s hanging on to the main attraction.

But the north is where history will be made,

“The Pope is coming for the World Meeting of Families. If they were to organize an event around the family, that might make it easier. Not a political event,” he told the Irish Times, adding to RTÉ News that he was concerned that meeting with too many officials and dignitaries would take away from the main purpose of the trip.

Our #family thought for the day for today is from Pope Francis who asks young people to never lose their voice or be afraid to speak out. #wmof2018 pic.twitter.com/fC9T6g0vG2

That’s a cop out. The arrival of the pope in the North is a political event even if he only goes there for an Ulster Fry. He is only adding to Northern Ireland’s second-class status by not finding the time. Bishop Donal McKeown of Derry and his two fellow Northern Ireland-based bishops Noel Treanor of Down and Connor and Archbishop Eamon Martin of Armagh, who is also primate of All Ireland, are heading the campaign and calling on Rome to head North.

“It seems to me that Northern Ireland is the only part of these islands that, for whatever reason, is not visitable by a Pope,” McKeown said to BBC Radio Ulster.

“I do think people in the North have come through terrible times...I really think that there would be many people who would appreciate an opportunity to display just how far we have come and reflect on the past.

“It is very unfortunate that, for whatever reason - and I am not privy to those discussions -- north of the border doesn’t appear to be on the agenda for a papal visit.”

The Northern bishops are right - the Northern Irish people after all they have been through deserve the pope.

Diarmuid Martin is a decent man. Surely, he will do the right thing.

* Niall O’Dowd is author of “Lincoln and the Irish - the Untold Story” published by Skyhorse Press. It is available in both Kindle and hardback on Amazon and on sale in Barnes and Nobles.