The Northern Ireland civil rights movement may not have been but for Martin Luther King Jr. 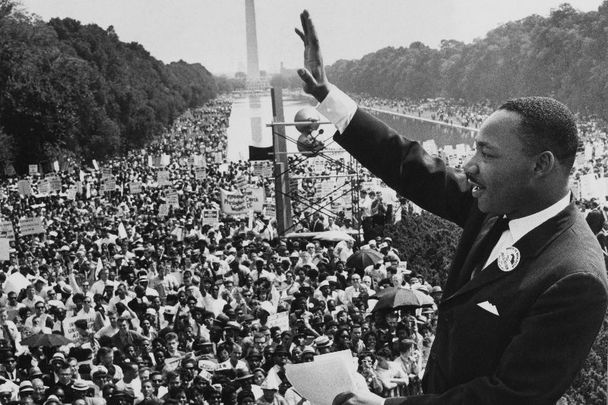 August 28, 1963: American minister and civil rights leader Dr Martin Luther King Jr waves to the crowd of more than 200,000 people gathered on the Mall after delivering his 'I Have a Dream' speech at the March on Washington for Jobs and Freedom, Washington DC. Getty Images

This Martin Luther King Jr. Day we ruminate on the great man's Irish legacy and his inspiration in the long march to freedom in Northern Ireland.

Martin Luther King’s legacy is intact as the greatest African American leader of all time, an orator to rival Lincoln, and a reputation that matches Gandhi around the globe.

His impact was global. It was certainly huge in Ireland. Indeed, we would never have seen the incredible changes in Northern Ireland and the push for equality were it not for the King legacy.

In his official Nobel Prize interview before accepting the award, John Hume stated, “Martin Luther King was very much our inspiration” when they had to address discrimination and prejudice in Northern Ireland.

The lives of John Hume and Martin Luther King Jr. have often been compared

The comparisons were evident. As John Conroy remarked in "Belfast Diary:" “Northern Catholics ... had a position in society equivalent to blacks in the United States at that time."

Catholics were treated as second-class citizens in Northern Ireland

The nationalists were treated like peasants and serfs, confined to ghettos and lowlands while the unionists lorded it over them. The Irish nationalist party that sprung up was hopelessly ineffective and occasional IRA campaigns came to naught.

Every year hundreds of Orange marches paraded through Catholic neighborhoods, flaunting their superiority and making sure that the “croppies lie down” policy was left intact.

The discrimination was especially blatant in three areas: gerrymandering of constituencies so that there was always a unionist majority, an incredible voting system that allowed multiple votes for rich landowners and businessmen – all Protestant of course – and vicious discrimination in housing.

It was in housing that one of the first flashpoints occurred when Austin Currie, a nationalist politician, squatted in a house in County Tyrone after it was refused to a large Catholic family desperately in need and given instead to a young, single Protestant woman. All 14 houses were given to Protestants on the estate.

When the first stirrings of the civil rights movement began in Ireland it was Martin Luther King’s name and tactics that were on everybody’s lips.

October 5, 1968, is generally accepted as the birth of the civil rights movement. On that day, inspired by Doctor King, a group of activists marched into Derry city center demanding an end to discrimination.

The Royal Ulster Constabulary (RUC), in full view of the cameras, attacked the crowd of marchers as viciously as any southern American sheriff attacked King’s followers.

The marchers were trapped between two lines of advancing RUC thugs and it was good fortune that nobody was killed as the police rained down blow after blow with batons.

The fuse was lit. In January 1969, the People’s Democracy, a university students' group, followed the path of non-violence and organized a "Long March" from Belfast to Derry modeled on King’s civil-rights march to Montgomery, AL. The march was attacked repeatedly along the way, but as it developed it drew more supporters and participants. By marching through "Protestant territory, “where it was repeatedly blocked and threatened, the Long March exposed Northern Irish sectarianism and the unwillingness of police to defend the right to protest."

As they neared Derry, at Burntollet Bridge, the marchers were ambushed by loyalists and members of the RUC. Eighty-seven activists were hospitalized. When the marchers reached Derry, the city exploded in riots. Following a night of rioting, RUC men entered the Bogside (a Catholic ghetto), wrecked a number of houses and attacked innocent civilians

Northern Ireland's sectarian nature was revealed to the world.

In the latter part of 1969 came the Battle of the Bogside when an Orange march was attempting to strut through the heart of the Catholic neighborhood.

For five days the clashes between police (trying to force the march through) and locals (trying to stop it) transfixed the world.

As Bernadette Devlin noted: “We reached then a turning point in Irish history, and we reached it because of the determination of one group of people in a Catholic slum area in Derry. In 50 hours we brought a government to its knees, and we gave back to a downtrodden people their pride and the strength of their convictions."

Without Martin Luther King's example there is no question the Irish civil rights movement, modeled so closely on his thinking, would never have come together and Northern Ireland might well still be Britain's dirty little sectarian secret.

Incredibly, the black preacher from Atlanta had reached halfway round the world and inspired a civil rights revolution in Ireland. On this day that we commemorate him. It is his Irish legacy of a long march to freedom that all Irish people should know.