From Bloody Sunday to Black Lives Matter: Detroit in conversation with Derry

"When I saw the photos of the tanks coming into your community and pointing at your children...it was like looking in the mirror. I saw our community in yours." 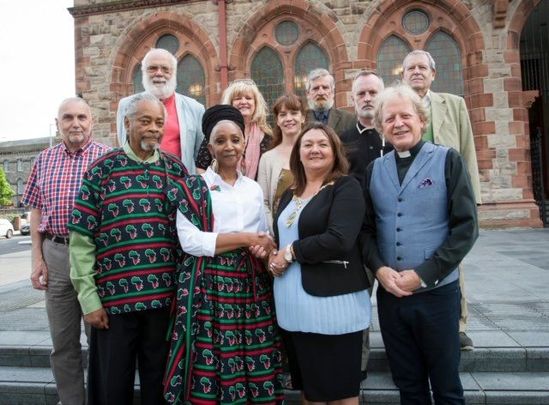 Panelists, organizers, & supporters of the "Battle of the Bogside: 50 Years On" event pose with former Derry mayor Michaela Boyle outside of Derry's Guildhall in August 2019.

Last August, activists from Derry, Belfast, and Detroit, gathered in Derry’s Guildhall to mark the 50th anniversary of the “Battle of the Bogside.”

The event, organized by The Derry Model, focused on the legacies and significance of working-class movements confronting years of state-sponsored oppression. Dr. Charles E. Simmons, lifelong Detroit activist, journalist, and professor emeritus drew connections between Derry’s experiences in 1969 and his own in Detroit during the 1967 rebellion: “When I saw the photos of the tanks coming into your community and pointing at your children...it was like looking in the mirror. I saw our community in yours,” he reflected.

I was in Derry with Charles and his wife, Rev. “Mama Sandra” Simmons, co-founders of Detroit’s Hush House Black World Community Museum, for the official launch of a project we’ve been calling the “Detroit Derry Dialogue,” a collaboration between my nonprofit, Éist; Detroit’s Hush House Black World Community Museum; The Derry Model; and the Museum of Free Derry. We’d been in conversation since 2016 about how we might come together—funding for international, grassroots peace-building efforts are hard to come by—and our trip, when we were finally able to make it happen, was transformative for everyone involved. We spent ten days in meetings with community groups and members of the Bloody Sunday families talking truth, accountability, and economic justice; we toured the area and learned about its history; and we made plans for phase two, bringing organizers and activists from Derry to Detroit.

The Northern Ireland Civil Rights Movement began in Derry and as human rights activist, Brian Dooley details in Black and Green: The Fight for Civil Rights in Northern Ireland and Black America, organizers in the north used the US Civil Rights movement as a blueprint for their own. So the civil rights struggle was a natural jumping-off point for our partnership. We also knew that the similar challenges of segregation, redlining, religious/ethnic division and persecution faced by communities in Detroit and Derry would provide rich fodder for meaningful and lasting collaboration between grassroots activists from both places. However, we wanted to take the project a step further, and use our partnership to open up a conversation between and amongst victims of state violence in both Ireland and the US—especially given that our shared experiences transcend racial boundaries. Our belief in co-liberation—the idea that, as my friend, mentor, and colleague Mama Sandra says, we can overcome if we walk together—is at the heart of our project.

The Museum of Free Derry is located on Glenfada Park in the Bogside, right in the area where the shooting started on Bloody Sunday; many of those were killed just steps from the front door, and there are still bullet holes in a back wall. Central to the mission of the museum, beyond telling the history of Free Derry and the story of the Bloody Sunday Justice Campaign, is to locate Derry’s experience within a broader international context of global struggles for freedom and equality, and their message of solidarity is apparent before one even enters its walls. As you approach the museum, you can’t miss the massive Palestinian flag painted across three panels of a second-floor picture window. Beside the front entrance, and running down the entire length of the museum is a stunning work of art called “We Shall Overcome,” created by local artist Locky Morris. The piece is a soundwave file of the crowd on Bloody Sunday singing the Civil Rights anthem cut into steel panels, and is meant to be a “paean to community resistance amidst deadly force.”

Similar expressions of solidarity adorn the interior walls; a glass wall in the lobby proclaims the Bloody Sunday Justice Campaign’s fight for truth a beacon for all those who struggle for justice: “Nobody who struggles for justice is a stranger here,” it reads. “And those who die in such struggles will always be honored in Free Derry.” Elsewhere in the museum, visitors are invited to make comparisons between their story and the US Civil Rights movement and beyond: “Bloody Sunday was not the first nor the last attempt by oppressive states to subdue their people. Bloody Sunday calls to mind Wounded Knee, Amritsar, Sharpeville, Grozny, Gaza, Fallujah…”

A small group of us are gathered in the lobby of the museum, having just seen a photo exhibit called Lost Childhood, which depicts the experiences of young children in the early days of the conflict. One of the members of the Bloody Sunday families asks me if I’ve yet seen When They See Us, Ava DuVernay’s miniseries about the Exonerated Five. They did the same thing to our families, he told me, referring to the lengths to which the police went to falsely accuse the five young men of a horrific crime. The Bloody Sunday families had to spend decades fighting to clear the names of their loved ones because the soldiers who pulled the triggers lied about the marchers being armed to justify their actions.

From the outset, the Derry Detroit Dialogue was designed to address the impact of structural racism/discrimination and state violence on our communities, as well as how we, as a society, heal and build community in the aftermath of violence and unrest. Much like politicians and police departments do in societies emerging from conflict, we are bringing members of the Bloody Sunday families together with Black Detroiters impacted by police violence to share intimate perspectives on the long road to justice, in whatever form their view of justice entails. What might they be able to share with one another about coping strategies, grief, or healing from trauma? Is the idea of “resilience” something that the members of the Bloody Sunday families embrace? What lessons might be imparted from decades of confronting corrupt governments in pursuit of truth and justice? Are there concrete ways that we might use these new relationships to amplify the Movement for Black Lives in the United States?

In June 2010, upon the release of the Saville Report (the outcome of the Saville/Bloody Sunday Inquiry), then-Prime Minister David Cameron apologized on behalf of the British government for the Army’s actions on Bloody Sunday, calling the murders “unjustified and unjustifiable.”  Tony Doherty, whose father was killed on the day, stood outside Derry’s Guildhall on the day to share the collective response of the Bloody Sunday families. Doherty said, in part:

"The repression that came upon us was the same as is suffered by ordinary people everywhere who dare stand up against injustice. Sharpeville. Grozny. Tiananmen Square. Darfur. Fallujah. Gaza. Let our truth stand as their truth too. Bloody Sunday was a great injustice. But the fight for truth and justice has also been an inspiration to us and to the people of Derry. It has deepened our sense of who we are and made us more aware that we are also citizens of the world. Nobody who struggles for justice will be a stranger here. Nobody who dies in the struggle for justice will be forgotten here."

Let our truth stand as their truth too.  As progressive Irish Americans stand in solidarity with Black Lives Matter, let us connect Irish history to current events in the US. The most important lesson we can learn from Bloody Sunday and Derry’s experience is that tying our struggles together is necessary if we truly wish to further the global struggle for justice.