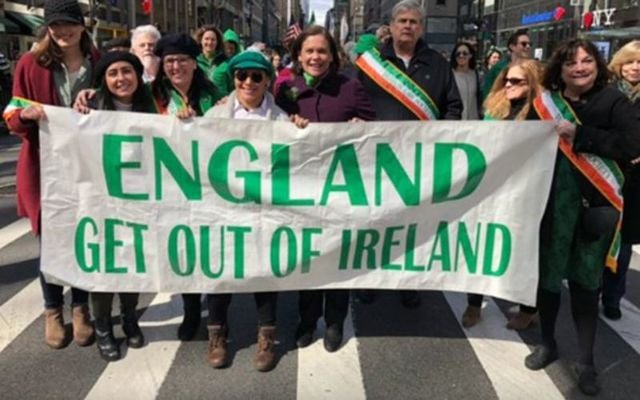 “England Get Out of Ireland “is a banner that has long defined the New York St. Patrick’s Day Parade. It is the only political banner allowed in the parade, a gesture of defiance that has echoed down the decades.

Since 1948, it has been borne and I can attest that it gets the loudest cheer along the route.

John Lahey former Parade Chairman explained it best to the New York Times. “There still are strong feelings that England still occupied six counties of Ireland,” he said, adding that in his 25 years on the board, no one has ever raised objections.

It also pales beside the Nazi flags that some unionist communities have flown in the run-up to their St. Patrick’s Day, which is July 12, and the black coffin they burned last year with the name Martin McGuinness on it.

A Nazi flag flying near a loyalist bonfire in Carrickfergus.

Not to mention the Confederate flags which are a regular staple glorifying the fight for slavery and used as a threat to the Croppies to lie down before their holiday.

It is stating the obvious the Irish want the English out of Ireland, which is the same goal the Irish government has had since Ireland was partitioned.

It means the English army, all the apparatus, the rule from London. Irish nationalists want it gone.

Yesterday the Irish media “discovered” the “English out of Ireland banner” when Sinn Féin leader Mary Lou McDonald marched behind the historic banner with the Brehon Law Society, a human right’s group dedicated to justice issues.

Mary Lou McDonald is a bright, articulate Dublin woman, the next generation of Sinn Féin leadership, and she could oversee the party come to power North and South. For that reason, there is a deep urge to try and damage her by Sinn Féin opponents. 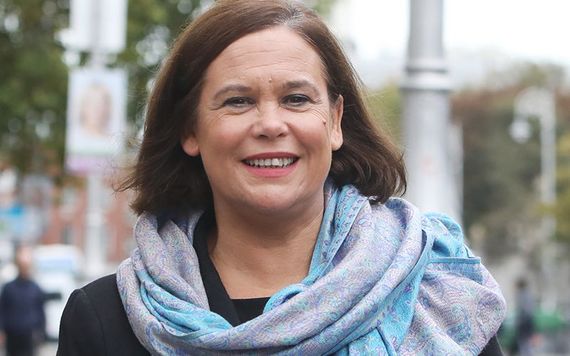 Gregory Campbell, a unionist hardliner, condemned the banner and he was shocked by the fact that McDonald marched behind it.

This is the same Campbell who said he would use any Irish Language Act as “toilet paper.” The Democratic Unionist Party (DUP) politician who once stated  “Curry my yoghurt can coca coalyer” in the Northern Assembly, mocking the Irish phrase: “Go raibh maith agat, Ceann Comhairle” which means “Thank you, Chairperson.”

Gregory is no stranger to hostile comments but the Social Democratic and Labour Party (SDLP) and Fianna Fáil jumped on board with loud condemnations of McDonald.

In the case of the almost moribund SDLP, former leader John Hume, a Nobel Prize winner and deservedly so, once stated, “It’s a United Ireland Or Nothing,” to loud praise from his colleagues. There is not much difference between “England out of Ireland” and “It is a United Ireland or Nothing.”

Then there’s Fianna  Fáil, the party that threatened to invade the North during the earliest days of The Troubles and indeed three members of the Fianna Fáil cabinet were tried for attempting to.

The party which announced it “would not stand idly by” did just that, of course, for all their bluster. Under Mícheál Martin, the current leader, they appear neo-Unionist.

Let me give the last word to The Brehon Law Society which carried the banner “England Get Out of Ireland” that McDonald marched behind which they pointed out “… was the only expression allowed to be carried on a banner in the New York City St. Patrick’s Day parade reflecting the desire of millions of Irish Americans and the Irish diaspora for the reunification of Ireland.

“It is an iconic statement that has been carried in the NYC Parade by many groups for decades.

“Irish reunification must be planned for and discussed openly and inclusively.

“As a Law Society dedicated to peace and justice for a united Ireland, we are grateful for the opportunity to express a deeply-held sentiment felt by many Irish and Irish-Americans.”

What do you think? Should the "England Get Out of Ireland" banner continue to be part of the St. Patrick's Day parade? Let us know in the comments section below.