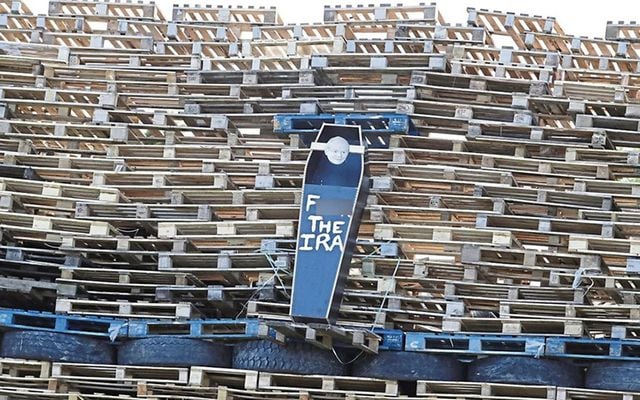 The son of former Sinn Fein First Deputy Minister Martin McGuinness has forgiven Loyalists who burned an effigy of his late father in a coffin on a bonfire in East Belfast as July 12 loomed. The 12th of July is the day Unionists celebrate the Battle of the Boyne.

Instead Emmett McGuinness stated it was time for the "annual display of hate to end."

I am very thankful that I was raised by parent's never to hate anyone or anything. @moneillsf is right, the annual display of hate must end.

"This display is a particularly sickening manifestation of the hate we have witnessed across the North over recent days, including some of the most vile sectarian and racist abuse," the South Antrim MLA said.

"This is the action of hatemongers intent on indoctrinating bigotry and perpetuating sectarian divisions in our society. Their behavior stands in stark contrast to the work that Martin McGuinness did to build reconciliation and reach out the hand of friendship.

"It is also grossly insulting to the McGuinness family which still mourns the loss of a much loved father, brother and grandfather." "It is simply unacceptable that unionist political parties still refuse to condemn this kind of hate crime.

"Rather than supporting these so-called celebrations and, in some cases, posing for photos as they light the bonfires, it is long past time that political unionism showed some leadership and called for an immediate end to these sickening displays.

"I am directly challenging the leaders of all unionists parties to immediately disassociate themselves and their parties from this and other examples of sectarian hate crime."

The effigy of Martin McGuinness was one of many shocking effigies and signs tied to July 12th bonefires on Tuesday night.

Sinn Fein politician John Finucane, from Belfast, whose father Pat Finucane was killed in 1989 by loyalist paramilitaries reported to police that his own campaign posters had been placed on a bonefire.

My posters have been placed on top of a bonfire. I have reported this hate crime & theft to PSNI to allow them to act urgently. pic.twitter.com/Qu9WuD0SeZ

Social media erupted on July 11th with images of effigies and flags on bonfires as well as fires out of control.

My National Flag on top of a loyalist bonfire. Where is the respect for my Culture? pic.twitter.com/OIWtSdAiAS