Glasgow marchers sing “The famine's over, why don't you go home?” in lead up to July 12. 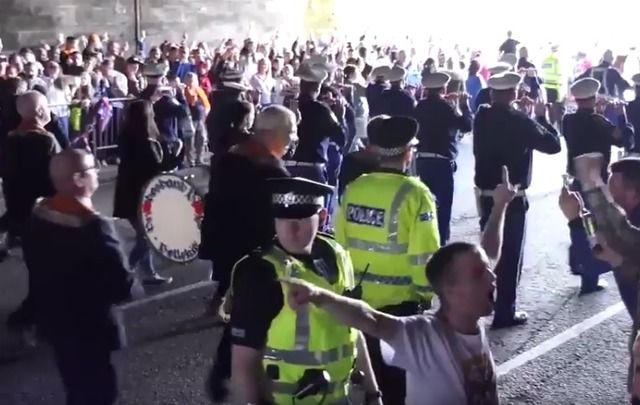 A still from a Twitter video of the Orange Order singing the banned Famine Song in Glasgow. Twitter / Liam O'Hare.

Glasgow City Council chiefs have told the Orange Order that their right to march in the run up to July 12 is “not absolute.” Police are currently investigating sectarian singing during Saturday’s (July 1) Orange Order parade in Glasgow to mark the 1690 Battle of the Boyne.

Video footage of the parade shows people singing the banned song, “The Famine Song,” which is deemed offensive, outside a Catholic church. The song’s lyrics urge people to leave Scotland because of their racial origin. Some of the lyrics include “The famine's over, why don't you go home?”

The song – sung to the air of the Beach Boys hit "Sloop John B" – was branded racist by a Scottish court in 2009.

Police are now investigating the following footage and have made clear that the Orange Order’s right to march is “not absolute.” They have stated that restrictions or bans will be introduced in the future considering this anti-social behavior.

Easy to laugh at the sheer absurdity of all of this but the sanctioned and approved anti-Irish racism on display here needs highlighted. pic.twitter.com/5gmmTHmqim

In the aftermath of the parade a senior member of the Orange Order in Northern Ireland spoke to Radio Ulster saying that he’s sure this song, which was played outside a Catholic Church, was not meant “to cause offense.”

Reverend Mervyn Gibson said he has always known this tune “as the Beach Boys' song.”

He told the Irish News this song had been played, on flutes, by loyalist bands before the lyrics were added.

“It was played long before it became 'The Famine Song' because it’s a tune that can be played on the flute.”

He added that other songs, such as The Beatles' “Yellow Submarine,” were also played.

A similar incident took place in Belfast in 2012 outside St. Patrick’s Church on Donegall Street. He said, “I am 100 percent satisfied that tune was not played outside St Patrick’s to cause offense.”

In Glasgow, the Orange Order aimed to distance themselves from the incident. There were just eight arrests for “minor offenses” with no major incidents.

Executive Officer in Scotland Robert McLean said none of his members were involved in singing this banned song.

He said, "None of our members took part in this. The band played the tune, but it was the people on the streets who put the words to the tune.

"There is nothing offensive about playing a tune, only when you put the words to it.

"If there is evidence to say who was singing then I am quite sure that the police will deal with that."

A Glasgow City Council spokesman told the Herald, "The European Convention on Human Rights enshrines the rights to peaceful assembly and freedom of expression.

"However, these rights are not absolute. They must be balanced by the responsibility to ensure the rights of others are not infringed.

"As with all public processions there will be a debrief involving Police Scotland. The council will take into account any issues of public disorder, antisocial behavior or damage to property resulting from the procession."

"It will also take into consideration any evidenced issues and, if a future procession notification is received, the likelihood of any restriction or prohibition may be greater."

The lyrics to the Famine Song are:

I often wonder where they would have been
If we hadn't have taken them in
Fed them and washed them
Thousands in Glasgow alone
From Ireland they came
Brought us nothing but trouble and shame
Well the famine is over
Why don't they go home?

Now Athenry Mike was a thief
And Large John he was fully briefed
And that wee traitor from Castlemilk
Turned his back on his own
They've all their Papists in Rome
They have U2 and Bono
Well the famine is over
Why don't they go home?

Now they raped and fondled their kids
That's what those perverts from the darkside did
And they swept it under the carpet
And Large John he hid
Their evils seeds have been sown
'Cause they're not of our own
Well the famine is over
Why don't you go home?

Now Timmy don't take it from me
'Cause if you know your history
You've persecuted thousands of people
In Ireland alone
You turned on the lights
Fuelled you boats by night
That's how you repay us
It's time to go home.
Read more: Democratic Unionist Party deal will haunt Theresa May