“In your darkest hour, the light of hope within you was shining around the world," the civil rights leader said of the Free Derry movement. 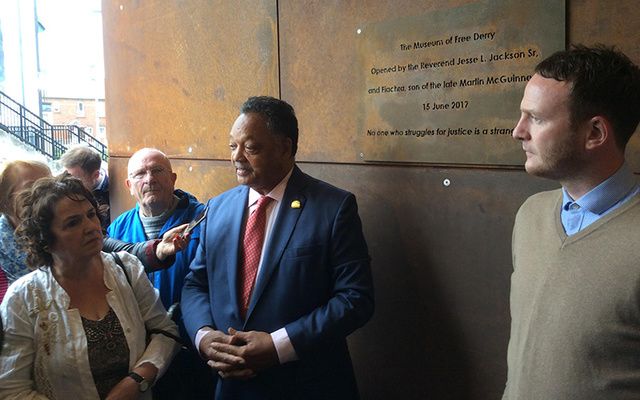 Civil right leader Rev. Jesse Jackson paid enormous tribute to the late Martin McGuinness this week in a rousing speech to open the Museum of Free Derry. Comparing the Derryman, who died earlier this year after a short illness, to the likes of Martin Luther King Jr and Nelson Mandela, the activist laid a wreath at the Sinn Féin leader’s grave, meeting with other members of the political party to pay tribute.

"It was a great honour to welcome the Rev. Jesse Jackson to Derry today, as he laid a wreath at the grave of Martin McGuinness, accompanied by Martin's wife, Bernie and daughter, Fionnuala,” Sinn Féin Foyle MLA, Karen Mullan told Derry Now.

"Rev. Jackson has played a significant role in the development of the peace process here in Ireland, but also served as a voice for oppressed people throughout the world.”

“In the name of Jesus of Galilee and Gandhi and Dr. Martin Luther King, Jr., it is only appropriate that on this occasion we fondly remember Martin McGuinness, a man of Derry, a passionate man, a commander in the Irish Republican Army who fought with everything he had for his people, but who also, like Nelson Mandela and the African National Congress in South Africa, had the capacity to transform himself and the IRA’s political arm, Sinn Fein, into instruments of peace and reconciliation after decades of warfare known as The Troubles,” said Rev. Jackson.

“He saw peace and reconciliation as power, as power beyond the limits of war.”

The launch of the Museum of Free Derry with Rev. Jesse Jackson.

Accompanying Martin McGuinness' son, Fiachra, Rev. Jackson attended the official launch of the museum which will look at the “Free Derry” movement and the struggle for civil rights for Catholics in Northern Ireland throughout the 1960s and ‘70s. The launch coincides with the seven-year anniversary of the publication of the Saville Inquiry into Bloody Sunday, which found that the 14 civil rights marchers and bystanders killed by the British Army on that day had been murdered without any justification.

Exhibitions in the museum will tell the history of the civil rights movement, the Battle of the Bogside, interment, Free Derry and Bloody Sunday itself and features artwork of the soundwave captured when the civil rights marchers struck up the anthem “We Shall Overcome”.

'a permanent record of the courage and sacrifices .. made to achieve peace, justice and self-determination.' @RevJJackson @MuseumFreeDerry pic.twitter.com/wXh02zzhL6

"We are all thrilled to officially open the new Museum of Free Derry after a hugely successful first few months in our flagship building,” said Bloody Sunday Trust Chairperson Robin Percival.

"While it has been a long and hard road, we are proud to be back in the heart of the Bogside, where so much of our story happened."

“Free Derry is the cornerstone of the civil rights movement of Northern Ireland,” continued Rev. Jackson in his speech.

“The 1968-to-1972 story of Free Derry is told from the point of view of the people most involved in the struggle.  And the museum is located on the land where the struggle took place.  This is sacred ground – holy ground - set apart to remind and teach future generations what happened here!  It’s a permanent record of the courage and sacrifices these men and women made to achieve peace, justice and self-determination.

The Museum of Free Derry 'located on the land where the struggle took place' @RevJJackson pic.twitter.com/y3Usws5BQ5

“In your darkest hour, the light of hope within you was shining around the world. In Cuba, Nicaragua and South Africa, Chicago and Poland, we felt you and gained inspiration from your struggle.”

“Even though we were enmeshed in our own tentacles of the global struggle for justice and peace – which we hope was an inspiration to you as well - we saw you.  And we identified with you.  Truth be known, neither of us was ever really alone.”

The civil rights leader also had some harsh words for current US President Donald Trump and the threat he believes he poses to civil rights.

“It has been a difficult political season. The loser won by three million votes. It makes the rule in democracy of one person, one vote stand on its head,” he said.

“It was an ugly campaign season of name calling and demeaning opposition. It was a season of threats of banning Muslims, locking out refugees, building a 2,000 mile long wall between us and Mexico, revising the disconnect with Cuba, challenging the birthplace and legitimacy of President Obama.

“It got even uglier with Russian hacking and the suppression of the black vote. Suppression played a huge role in the campaign but was rarely discussed, let alone, investigated.