It was the unlikeliest of good working relationships, but somehow Martin McGuinness and Ian Paisley were able to put 30 years of warring and animosity behind them to lead Northern Ireland together. 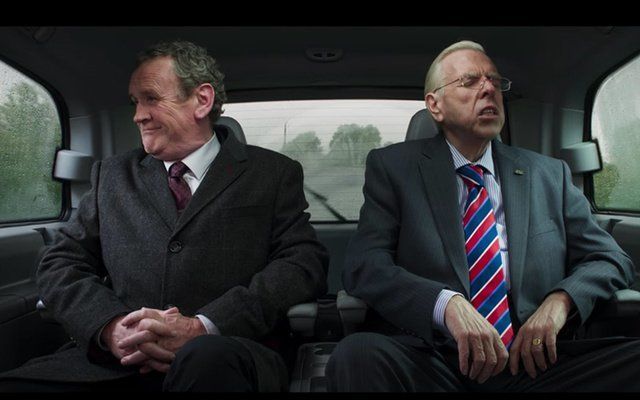 It was the unlikeliest of good working relationships, but somehow Martin McGuinness and Ian Paisley were able to put 30 years of warring and animosity behind them to lead Northern Ireland together.

"The Journey," an IFC film premiering June 16 in the US, chronicles the evolution of their relationship from adversaries to co-leaders who got along so well they were nicknamed 'the Chuckle Brothers' – a reference to characters from a British children’s TV program.

Read More: Ian Paisley's wife on the "special relationship" between Martin McGuinness and the DUP leader

In a script by Colin Bateman, under the direction of Nick Hamm - themselves from Northern Ireland - that evolution is condensed into one fateful journey at the start of power-sharing negotiations between McGuinness' Sinn Fein and Paisley's Democratic Unionist Party.

In this exclusive sneak peek, they have progressed past the stony silence phase but are still nowhere near reaching a common ground:

As IrishCentral's Cahir O'Doherty recently wrote in an interview with the film's director, Nick Hamm:

"The great challenge, as the riveting new film "The Journey" shows us, was to get these two implacably opposed leaders and their parties into the same room, and then to get them to talk and listen to each other. It was no small order.

Featuring career best performances from Colm Meaney as McGuinness and Timothy Spall as Paisley, one of the most bracing aspects of "The Journey" is that it reminds us just how hard the two men worked to achieve a lasting peace, and just how easily it could have eluded them."

What do you think of the clip? Will you be going to see "The Journey"? Share your thoughts in the comment section.