A chat with Chuck Feeney the real antidote to Donald Trump

A Happy Birthday call from an old, old friend made my day Monday, especially as I daily get more depressed about Donald Trump’s insane actions and ego. 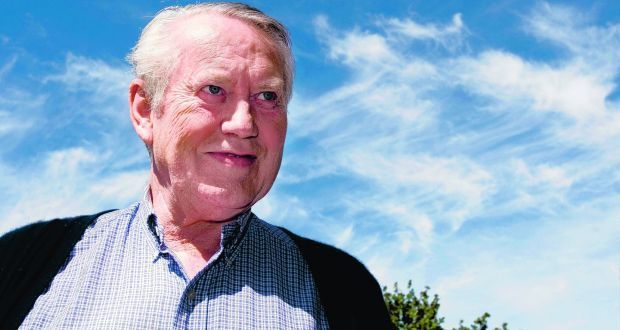 Whether it is recommending Clorox ingestion or using potentially fatal drugs to fight the virus, the circus, it seems, President Donald Trump never stops. Luckily, the birthday call was from the ultimate anti-Trump, America’s favorite philanthropist Chuck Feeney.

Chuck, as many of you will know, anonymously gave away most of his $8 billion fortune before Forbes magazine and The New York Times uncovered his incredible generosity.

He made his fortune in Duty-Free Shops but made his reputation by funding massive educational, medical and philanthropic institutions here in the U.S. and often in his beloved Ireland.

Indeed, Forbes stated that Feeney was “the man who arguably has done more for Ireland than anyone since Saint Patrick” with his philanthropy.

Chuck is everything Trump isn’t -- a true philanthropist, a man who boasted not of his own achievements but of those he helped, a man who changed the nature of philanthropy with his “giving while living” philosophy.  He is the ultimate example of a life, and a fortune, well spent.

Not only that, but he was also at the heart of the Irish American involvement in the Irish peace process, most notably when funding Sinn Fein’s office in Washington after the IRA 1994 ceasefire.  No Sinn Fein office, no ceasefire. Chuck sorted that one out.

These days he and his wonderful wife Helga live in a small apartment in San Francisco where Chuck, though well into his eighties, keeps a gimlet eye on what is happening in the world.

It is clear from our conversation that Bill Gates is considered by both Helga and Chuck as a real hero of the fight against the pandemic.  Gates was among the first to warn of the potential of such a catastrophic event and has played a major role in finding ways to combat it.

The admiration is mutual. Speaking to Forbes, Gates said Feeney was the inspiration behind both the $30 billion-strong Bill & Melinda Gates Foundation and the Giving While Living Pledge. The pledge has enlisted more than 90 of the world’s richest to grant their wealth to charity.

Gates said, “Chuck is fond of saying that none of us has all the answers but I know that Melinda and I have learned a great deal from him in the time we’ve spent together.”

Alas, I think the Feeney's feel leaders like Jeff Bezos and Mark Zuckerberg fall far short of the Gates achievements in the current crisis.  It is clear that both think it is utterly ridiculous that Bezos, with his $145 billion and massive mansions all over the place, is only recently dipping his toe into the philanthropy pool.

Likewise with Zuckerberg, who could really do with a makeover after all the questions about Facebook, Russian hacking and fake groups emerged. Both men have much to prove when it comes to giving back.

They should learn Feeney’s main truth which is money and accumulation of it was never the point. It was the good that could be done with the money that counted.

One only wishes that Trump, Bezos, Zuckerberg, and any budding billionaire could sit for a while with Chuck and Helga Feeney and understand what a joy-giving can be, not just for the recipient but for the donor too.

Feeney and Trump represent the two faces of America -- the Feeney side open, giving, generous, self-deprecating; the Trump side nativist, corrupt, uncaring of the common man.

It is important to remind ourselves of the different America both men represent and to understand that Chuck Feeney ‘s influence has had a profound impact for good. America is about far more than Donald Trump.

Read more: After four years of Trump, are you better off than you were before?