A possible Brexit solution that allows all sides to claim victory

The inability of British politicians to find a working formula for the Northern Ireland border backstop and Brexit means that they have no answer to the problem. 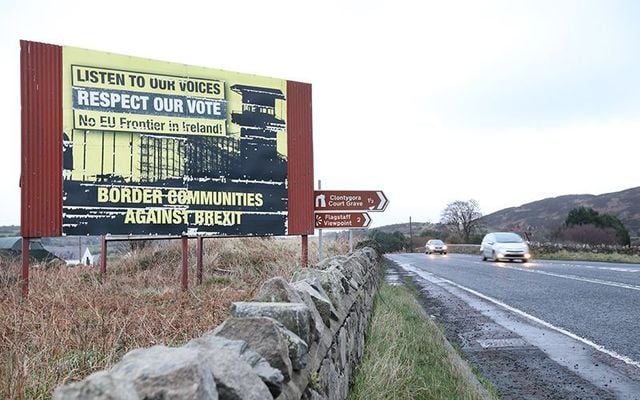 A poster erected in Northern Ireland protesting the possibility of a hard border. RollingNews

The inability of British politicians to find a working formula for the Northern Ireland border backstop and Brexit means that they have no answer to the problem.

Likewise, the European Union and Ireland are frozen in place waiting for a British solution that will never come.

As for me, I think a middle way, such as George Mitchell found time and time again during the Good Friday Agreements negotiations, is the only way forward. It would involve everyone gaining but also conceding on the issue.

The backstop in this scenario would not be permanent but rather have a ten-year time limit before it expires.

That achieves two objectives, taking the crisis out of the immediate and slowing the rush to perdition but also promising Unionism the backstop is not permanent.

It would also allow a decade to pass during which technological and other non-intrusive ways of monitoring the border could be in place.

What do nationalists get? A date, after the five years mark has passed, for a united Ireland referendum.

The British promised this in the Good Friday Agreement but so far have been reluctant to commit a date. I wouldn’t hold my breath.

The five-year time frame would allow both sides to begin a long-overdue dialogue and internal debate as to whether a one-island solution is achievable.

Knowing that votes from the other side would be critical to either stay British or become Europeans and Irish, a restrained and focused debate could begin.

Mural protesting Brexit and calling for a united Ireland.

For the English, the solution guarantees that the backstop is not permanent and indeed, that they would be rid of the issue forever if the Northern electorate goes for a united Ireland. For the Brexiteers the unity referendum allows them to pitch in to retain the union.

Finally, for the Irish government it would be an affirmation of their stance that the backstop could never be dismissed in the short term, that their commitment to the nationalists on the border poll had been met and they could then embark on a very vital mission of convincing all parties including many skeptics in the South that a united Ireland with consent was the best long-term solution.

What do you think is the best solution to Brexit? Tell us in the comments section below.