Taoiseach Micheál Martin won several instances of applause, including for his comments on Russia, President Biden, and immigration, during remarks at the Irish Consulate on Friday. 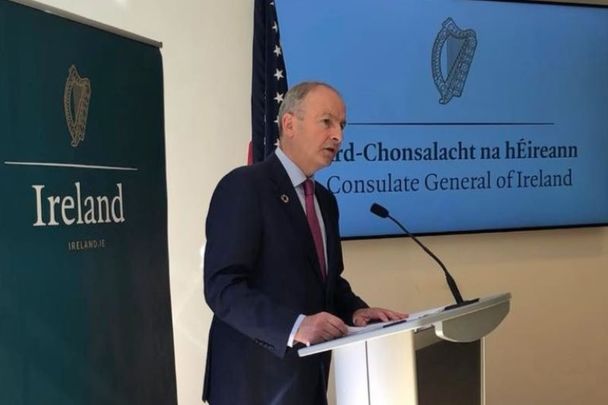 Taoiseach Micheál Martin concluded his visit to New York City, where he had engagements for the United Nations General Assembly, with a visit to the Irish Consulate to deliver remarks to Irish American community members on Friday, September 23.

The Taoiseach’s visit to the Irish Consulate on Friday comes a year to the day since he attended a similar, though more discussion-based, event at the Consulate where he conversed with local Irish American community members.

“I recall clearly the stories shared with me that day of innovative and thoughtful ways of working that you, our community here, created to stay connected during the height of the pandemic and to keep the community spirit alive and well,” the Taoiseach said on Friday.

Although the Taoiseach’s remarks on Friday were briefer than those of last year, he did win several instances of applause from attendees.

The first came when he spoke of Ireland’s work on the UN Security Council: “We’ve been actively engaged in the international response to Russia’s illegal invasion, using our seat on the United Nations Security Council, our voice in the European Union, and working with our friends here in the United States and further afield to support Ukraine.”

The Taoiseach's comments about Ireland's response to the situation in Ukraine came the same day that Erik Mose, who heads the Commission of Inquiry on Ukraine, told the UN Human Rights Council in Geneva that the Commission “concluded that war crimes have been committed in Ukraine.”

With nearly 48,000 arrivals in Ireland from Ukraine as of August 7, the Taoiseach likened Ireland's response to Ukrainian refugees to how the Irish once sought refuge in the US: “The people of Ireland have opened their hearts and their homes to the Ukrainian people, fleeing war in their country, just as so many Irish sought and found refuge here in the United States during hard times in our past.”

The Taoiseach received his second round of applause when he said pointedly: “Russia’s flagrant disregard for international law and for the sovereignty and territorial integrity of Ukraine cannot be allowed to stand."

He added: “This is not a question of East versus West. There is a fundamental principle at stake. If Russia’s invasion stands, then no country is safe, especially small countries with large, powerful neighbors.”

The Taoiseach thanked all of them for their work keeping Irish-American links relevant, vibrant, and dynamic. 🇮🇪🇺🇸 pic.twitter.com/ojx1fnwygJ

The Taoiseach said he found a “shared sense of urgency” at the UN during the General Assembly about other challenges that the world is facing, such as climate change, food, and security.

“In confronting these challenges, the world appreciates having the strong support of a globally engaged President of the United States in the White House,” the Taoiseach said, which was met with applause.

The Taoiseach did not have a formal meeting with President Biden this week, who was also attending the UN General Assembly. He was due to attend a reception hosted by Biden on Wednesday evening, but he missed that after a bird strike forced his Aer Lingus flight to return to Dublin, delaying his arrival.

Pivoting to the "deep and personal concern" of immigration, the Taoiseach said: "The government together with our diplomatic team here in the United States takes every opportunity to raise the position of our Irish citizens who are seeking to regularize their situation with the US administration, and we do that at every level.

"We continue to support interventions which can make the lives of those citizens better," he said, receiving applause.

"Ireland is very fortunate to have a diaspora that makes such a meaningful contribution to our country and which makes us proud as a country," the Taoiseach said, "and many of you here today are representatives of the myriad of Irish community, cultural, philanthropic, and business networks which support the community, look after those amongst us in most need and keep the ties between Ireland and New York strong."

Concluding his remarks, the Taoiseach said: "In times such as these, the Irish, our diaspora, and our friends, have not been found wanting.

"Amid the uncertainty of the past two years, the Ireland - US partnership is as strong as ever," which was met with applause.

"I ask you now to continue to connect, continue to engage, to empathize, and to act through diaspora networks and the Consulate here in New York.

After his roughly 10 minutes of speaking, the Taoiseach moved through the room to meet and chat with attendees. He was set to fly back to Ireland straight after the event, which hopefully went more smoothly than his travels to the US on Wednesday.

While the Taoiseach's visit to the Irish Consulate was shorter than last year's, it is still proof of the Irish government's effort to prioritize, maintain, and nurture the Irish - US relationship.