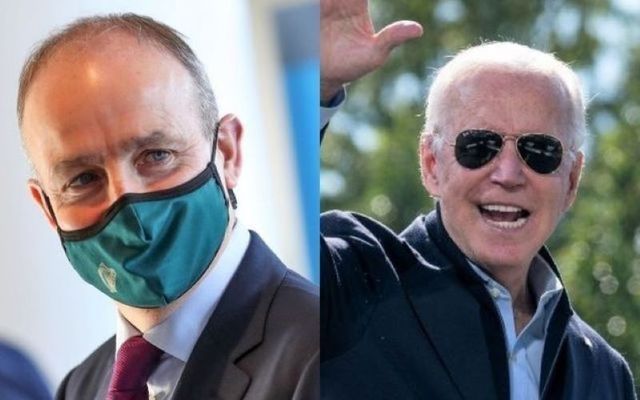 US President Joe Biden and Ireland’s Taoiseach Micheal Martin will be hosted by US Speaker of the House Nancy Pelosi on Wednesday, March 17, St. Patrick’s Day, for the annual Friends of Ireland Celebration.

Every year, the Speaker of the House of Representatives hosts a Friends of Ireland Luncheon to celebrate the strong relationships between the United States, Ireland, and Northern Ireland. Due to the ongoing public health situation, this year’s Friends of Ireland Celebration will take place virtually..

The live stream of the Virtual Annual Friends of Ireland Celebration will be available here on IrishCentral on March 17 from 12:30 pm EST:

While the Friends of Ireland Celebration will be live-streamed via YouTube from 12:30 pm EST on Wednesday, the Taoiseach's meetings with Vice President Kamala Harris and President Joe Biden will be carried on Ireland's RTE News and the White House's social media accounts.

The Taoiseach is due to meet with Vice President Harris at 11:30 am EST and the two will engage with the inaugural class of Frederick Douglass Global Fellows, twenty American students from minority backgrounds who have been selected to visit Ireland later this year, following in Douglass’s footsteps 175 years ago.

At 1 pm EST, President Biden and Taoiseach Martin will meet. The two leaders are expected to cover a broad agenda of issues during their virtual meeting, including the deep ties between the United States and Ireland; combatting Covid19 and driving recovery; and shared global challenges, including climate. The meeting will also be an opportunity for the Taoiseach to thank President Biden for the US’s ongoing support for the Good Friday Agreement.

The Taoiseach will present President Biden with the traditional Shamrock Bowl, extending St Patrick’s Day greetings from the people of Ireland to the people of the United States.

Speaking in advance of his virtual visit, the Taoiseach said: "The period around St Patrick’s Day is when we traditionally celebrate the remarkable relationship between the US and Ireland. It is a relationship which remains strong and positive, increasingly balanced economically, and covers a wide and growing range of shared interests.

"My programme covers different dimensions of that relationship: the people-to-people ties, Ireland’s contribution to the diversity that powers America; our economic relationship, where Ireland has a strong story to tell despite the impact of the pandemic, which has dominated life in both our countries over the past year.

“My visit is an opportunity to highlight how our mutually beneficial trade and investment relationship leaves both our economies well-positioned to bounce back quickly.

“I look forward greatly to meeting President Biden, who has a very special connection with Ireland, and to bring him greetings from Ireland on this his first St Patrick’s Day in office as President. I will thank him personally for his unstinting support for Ireland over many years, including in recent times for his support in helping to secure a positive outcome in the Brexit negotiations, as we face into the task now of making those new arrangements work well."

The Taoiseach will participate in all events from Government Buildings in Dublin, Ireland.