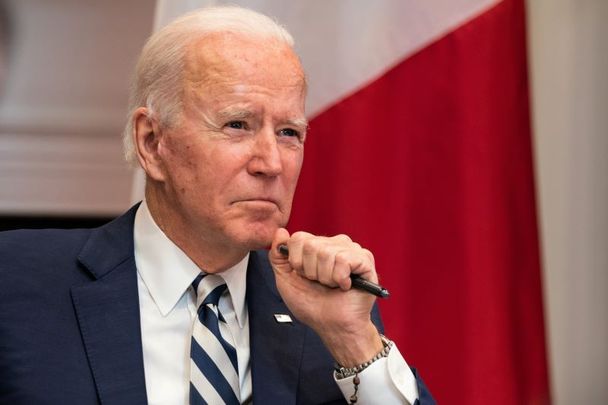 The Biden administration has made it clear it stands with the Irish government and the Good Friday Agreement as tensions rise between Britain and Ireland over the rules covering Northern Ireland trade in the Northern Ireland Protocol.

“President Biden has been unequivocal in his support for the Good Friday Agreement," White House Press Secretary Jen Psaki said during a press briefing on Thursday.

"This Agreement has been the bedrock of peace, stability, and prosperity for all the people of Northern Ireland.

“We also welcome cooperation between our British and Irish partners on the Northern Irish Protocol and the recent strong statements on these governments’ full commitment to the Good Friday Agreement.”

A spokesperson for US President Joe Biden said he has been unequivocal in his support for the Good Friday Agreement and that this remains the case. White House Press Secretary Jen Psaki was asked a question about plans for a US-UK trade deal. | Read more: https://t.co/2Y8GBJbFOJ pic.twitter.com/ZtmRdof3fS

Irish Foreign Minister Simon Coveney launched an angry attack on the British unilateral decision to continue with the present rules rather than abide by a previous agreement to move on a new date to a different formula. He said the European Union would likely take the issue to court .

The Irish government has made clear that any unilateral move by Britain on the border issue nullifies a key agreement clause in the GFA.

Coveney told RTE  radio he “did not favor legal action but favored engagement based on trust between both sides.”

“If the UK cannot simply be trusted because they take unilateral action in an unexpected way without negotiation, well then the British government leaves the EU with no option and that is not where we want to be,” he said.

The strong comments from the White House and the Irish government came the day after the UK government unilaterally extended a grace period for checks on food imports to Northern Ireland from the end of March to October 1, which the European Commission has slammed as a violation of the Northern Ireland Protocol and the good faith obligations under the Withdrawal Agreement.

Previously, before being elected President, Biden warned that the Good Friday Agreement cannot “become a casualty of Brexit."

“Any trade deal between the U.S. and U.K. must be contingent upon respect for the Agreement and preventing the return of a hard border. Period," Biden said in September.

Elsewhere on Thursday, Ireland's Minister for Foreign Affairs launched an angry attack on the British unilateral decision to extend the grace period.

Speaking on RTE Radio 1, Coveney said: "The difficulty is that the British government has changed their approach. Unfortunately, what this means, is that the EU are negotiating with a partner they simply cannot trust.

"That is why the EU is now looking at legal options and legal action which effectively means a much more formalized and rigid negotiation process as opposed to a process of partnership where you try to solve problems together.

"So this is really unwelcome. It's the British government essentially breaking the Protocol, breaking their own commitments, again, and the EU having to then consider how they respond to that while at the same time ensuring that in practical terms the Protocol can be implemented.

"But the way in which the British government has done this, which essentially is to ignore the commitments that they've made, the relationships they have built with the EU, and instead, to make decisions on the basis of politics in Westminster in terms of some relationships presumably in Northern Ireland as well, they have decided to act unilaterally which is clearly in breach of the Protocol and the commitments that have been made only a few weeks ago."