Creeslough is the latest in a string of tragedies in Ireland

As Ireland mourns after the fatal blast in Creeslough, Co Donegal, what can be done for the other tragedies that have rocked the country? 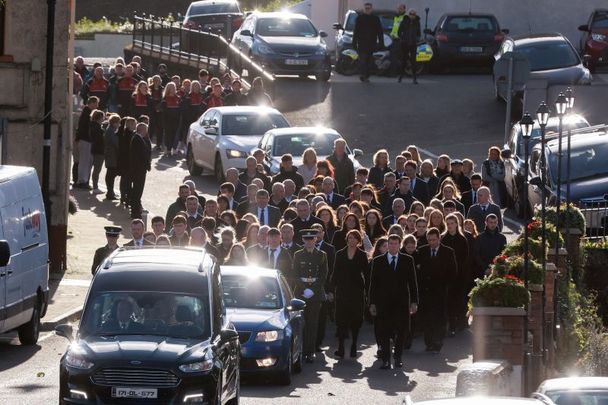 October 13, 2022: Mourners arriving at St Michael’s Church, Creeslough, for the funeral of explosion victim Martina Martin who was working in the shop at the time of the incident on October 7. RollingNews.ie

Last Friday at around 3 pm, the lives and destinies of 18 individuals intersected at a local service station and convenience store in the small village of Creeslough in Co Donegal.

They were a cross-section of Irish life – men and women, young and old, parents and their children, some working in the premises, others passing through buying gasoline, groceries, or using the post office.

Ten people tragically lost their lives following a fateful explosion, red candles lit in their memory just 24 hours later in the local church in Creeslough. For the other eight, they too were victims, rushed to hospital with the physical scars to show.

The mental scars, though, will reverberate for years if not decades to come throughout the local area, the county, and among the countless families and friends affected. Long after the funerals take place and the rubble is cleared, the painful memories will remain and the sense of loss and grief will endure.

The community responded heroically, neighbors rushing to the aid of those trapped in the debris, using their hands, car jacks, and tractors to help, putting their own safety at risk. First responders worked tirelessly with crews from both the North of Ireland and the Republic working together.

Politics was set aside as the leader of the Democratic Unionist Party, at the party’s annual conference, assured “the people of Creeslough of our collective prayers, and I want them to know that they will continue to be in our thoughts in the days ahead.” Taoiseach Micheál Martin said the solidarity from the North “will be long remembered.’’

In truth, while such cooperation was very welcome and indictive of what a local garda said was “people looking out for one another,” it was the tiniest of silver linings in what was a very dark cloud that descended on that village that day.

Sadly, last Friday wasn’t the only dark day in Ireland last week. In Kerry, on Wednesday, Thomas Dooley was murdered while attending a funeral. Attacked by a mob at a graveyard in Tralee, he was stabbed to death by a gang armed with slash hooks and machetes.

His wife Siobhan was injured, bravely trying to defend her husband. The killing was part of a Traveller feud which reports suggest was over an arranged marriage. By week’s end, the brother of the deceased and another relative were arrested and charged with murder.

Traveller advocacy group Pavee Point described the fatal stabbing as a senseless act and appealed for calm amid fears of reprisals. While they pointed out that processes are available to people, including mediation, the message clearly is not getting through, and this is just another example of a disquieting culture of violence among some in Ireland’s Travelling community.

The violent taking of a life on hallowed ground in the middle of a Christian burial horrified those in attendance, shocked the nation, and put the gardai on high alert in fear of an escalation. It was surely a crime against man and God.

While the gardai may have dealt with this particular incident relatively quickly, there is a political response required to deal with the broader issue of conflict within the Traveller community, whose members feel isolated from society.

Traveller culture is, however, an issue that politicians have steered away from afraid in this woke generation of causing offense to a minority group. The real offense is being caused to the community itself which is losing out by government failure to create safe, non-violent, spaces for families to live and bring up their families in peace.

Last month saw the triple killings of an 18-year-old and her eight-year-old twin siblings in a frenzied knife attack in Tallaght, Co Dublin. A settled Traveller family, their brother has been charged with murder.

Successive ministers have also failed to tackle the soaring suicide rates and mental health issues in the Travelling community. These are issues that need to be discussed. Sweeping them under the carpet really is no longer an option.

Another problem that needs to be tackled is the serious trend recently of underage deaths and murders.

Just as we were all reeling from the horror in Creeslough came news of the death of a mother and infant in Dublin. While details of the circumstances are not clear, the gardai have said the incident was not a result of natural causes and no one else is being sought in relation the deaths. Reports say that a note was found indicating a possible murder-suicide.

Last month, two young children, ages five and seven, were both pulled from a burning vehicle in Westmeath by a passing truck driver, but sadly neither of them survived. Their mother was charged with their murder.

Also last week, following a 12-month investigation, two people were brought before the court in connection with the death of a four-year-old boy in Limerick last year.

What is happening? All the above incidents – and they can be added to – suggest that people just cannot cope, and it once again puts our mental health support systems under scrutiny.

There is no doubt that in general Ireland has become a more individualistic society in recent years, and the burden of parenting has become greater with the traditional family support structure not as strong as it once was.

The government is aware of this, and a report last year sponsored by the Department of Children highlighted how the majority of parents felt unsupported in their role as parents. In general, they were unaware of services and supports in their area, and where it was available it was fragmented and uncoordinated. For those parents of children with additional needs, these difficulties in accessing help became a persistent challenge.

As an aggravating factor, the pandemic has led to a backlog of cases for social services and psychological help. Despite commissioning reports, the government remains as ineffective bystanders.

One stressed-out mother of a teenager with serious mental health issues informed me recently that the only state support she receives is from the gardai and emergency services. “I count myself lucky that I am alive at the end of each day,” she added chillingly.

It was a cry for help, but I’m afraid the cavalry in the form of additional state resources and support won’t be arriving anytime soon. Mental health is far down the list of priorities, and always has been with this government.

We are reaping what we sow, and while the bonds of community and kinship remain strong in rural Ireland, elsewhere that culture of individualism is more pervasive.

Perhaps the antidote to help us deal with the shock of current conflicts and difficulties and individual stress is to encourage more of the spirit of Creeslough. Community and connection can be a protective factor when experiencing trauma, and if last week taught us anything it is that we all need to look out for one another.

*This column first appeared in the October 12 edition of the weekly Irish Voice newspaper, sister publication to IrishCentral. Michael O'Dowd is brothers with Niall O'Dowd, founder of the Irish Voice and IrishCentral.

Bitter battle ahead as Democrats and Republicans prepare for midterms