Shauna Flanagan Garwe, 5, who was the youngest person to perish in the tragedy, was buying a birthday cake for her mother with her father Robert at the time of the explosion. Both were named dead. 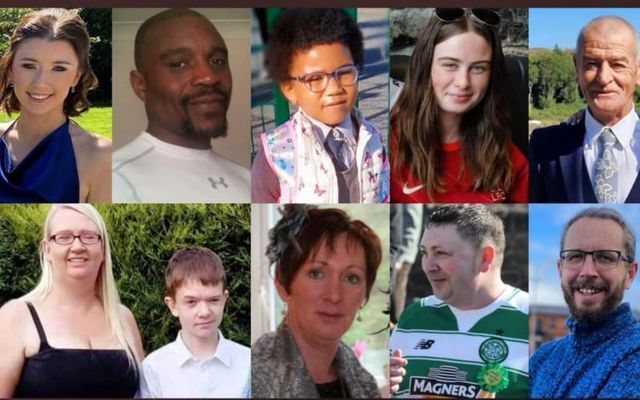 The ten victims who died following an explosion at a gas station in Donegal have been named.

A man in his 20s is also in critical condition in St. James' Hospital in Dublin, while seven other people injured in the blast remain in stable condition in Letterkenny University Hospital.

Shauna Flanagan Garwe, who was the youngest person to perish in the tragedy, was buying a birthday cake for her mother with her father Robert at the time of the explosion.

Garda Superintendent Liam Geraghty said all of the victims who died in the tragedy were "local people" who were "very much involved in the local communities".

"But it is a very strong community so I'm sure the community will come together and will support each other."

Bishop Alan McGuckian of Raphoe told mass-goers on Sunday that the people of Creeslough were "living through a nightmare" after the explosion.

"Why did they have to be there at that awful moment?"

Hundreds of people attended a vigil for the victims on Sunday morning in the town of Milford, standing in the rain as several people performed musical tributes. More than 20 vigils were held in Donegal throughout the day on Sunday.

Meanwhile, tributes for the victims and their families have poured in from all over Ireland and the rest of the world.

Pope Francis offered his condolences to the victims in a statement on Sunday afternoon.

"His Holiness Pope Francis was saddened to learn of the loss of life and destruction caused by the explosion in Creeslough and he expresses his spiritual closeness to all those suffering in the aftermath of this tragedy," Pope Francis said in a statement issued by a representative to Bishop McGuckian.

"While entrusting the deceased to the merciful love of almighty god, His Holiness implores the divine blessings of consolation and healing upon the injured, the displaced and the families coping with pain of loss.

"As a pledge of strength and peace in the lord, the Holy Father sends his blessing to all the people of Ireland."

English soccer club Liverpool offered their condolences to 14-year-old Liverpool fan, Leona Harper, ahead of the club's game against Arsenal on Sunday.

"We are deeply saddened by the loss of Leona. Our thoughts are with her family and friends, as well as all those affected by Friday's tragedy," the club said on Twitter.

We are deeply saddened by the loss of Leona. Our thoughts are with her family and friends, as well as all those affected by Friday's tragedy ❤️

Speaking to reporters on Saturday, Taoiseach Micheál Martin described the incident as an "unspeakable tragedy".

"It's very, very difficult to comprehend as people go about their daily lives that something like this could happen in the middle of the day," Martin told reporters.

The Taoiseach also met with people who were hospitalized by the explosion and staff at Letterkenny University Hospital and the Donegal Fire Service and paid tribute to their "incredible work" in response to the tragedy.

"Ten precious lives lost. The heartbreak and trauma in #Creeslough is unspeakable. We stand with victims, survivors, families and community. None of this makes sense. Our human vulnerability exposed. In the end all we have is love," McDonald said in a tweet on Sunday.

Ten precious lives lost. The heartbreak and trauma in #Creeslough is unspeakable. We stand with victims, survivors, families and community. None of this makes sense. Our human vulnerability exposed. In the end all we have is love. pic.twitter.com/NMnHXdwCO3

UK Prime Minister Liz Truss said in a statement that she was "deeply shocked and saddened by the tragic loss of life in Donegal".

"My deepest sympathies go out to the families and friends who have lost loved ones, and to the entire community of Creeslough as they come together in their moment of grief." Truss said.

The tragedy has also inspired some selfless acts of kindness among the local community.

Siobhan Carr, who owns the Coffee Pod in Creeslough, spent more than 24 hours giving out free food and drink to first responders working in the village.

Siobhan Carr and her tireless staff at The Coffee Pod in #Creeslough have been doling out mountains of free food and drinks to emergency workers for over 24 hours now - they’re still going as I write. They also refuse payment from journalists sheepish at the Donegal hospitality pic.twitter.com/SH5QCKyrsZ

Meanwhile, Creeslough Community Childcare opened on Sunday for anyone who needed "emergency childcare, a chat, a cup of tea, to use a charger, a bathroom, a quiet moment, or some company".