The fatal explosion destroyed the Applegreen service station in Creeslough, Co Donegal and has left the community “shattered.” 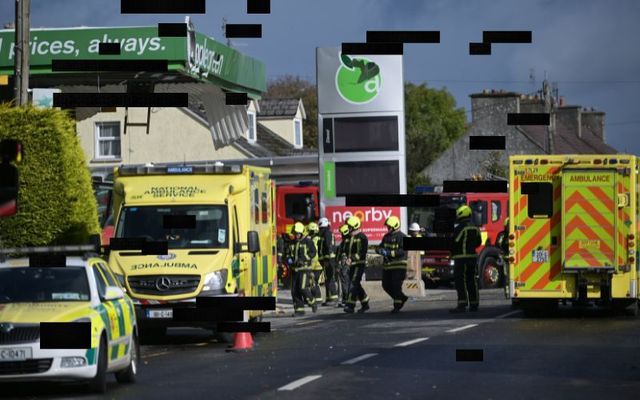 Emergency services attend the scene following an explosion at a petrol station in Donegal on October 8, 2022, in Creeslough, Donegal. Getty

Ten people have died following a major explosion at a gas station in Donegal, gardaí have confirmed.

Four men, three women, two teenagers, and a young girl are among the dead, gardaí said in a statement.

A five-year-old girl and her father were killed in the blast, while a mother and her teenage daughter were also killed.

Gardaí said emergency services do not expect to find anyone else among the rubble as everyone has now been accounted for.

Eight people are receiving treatment for injuries sustained during the explosion, with one person transferred to a burn unit in a Dublin hospital.

The explosion took place at an Applegreen Service Station outside the village of Creeslough at 3:20 p.m. on Friday, prompting a major multi-agency search and rescue operation that continued overnight and into Saturday morning.

The blast destroyed the service station and caused part of a nearby apartment building to collapse, leaving several people trapped underneath the rubble.

Emergency services from both sides of the border worked through the night to search for people trapped in the rubble while relatives of those feared to have been in the building at the time of the explosion gathered outside the station.

Multiple emergency service vehicles remained at the scene overnight, including fire services from both sides of the border, gardaí, and civil defense.

A coast guard helicopter was also at the scene to airlift injured people from Letterkenny University Hospital to Dublin.

Northern Ireland's air ambulance has also been deployed during the operation in adding to fire crews and ambulances from the region.

Emergency services used sniffer dogs in an attempt to locate people trapped beneath the rubble, while all machinery was turned off at one point on Friday and onlookers were asked to remain silent so that rescue workers could try and detect survivors trapped in the rubble.

Taoiseach Micheál Martin said the nation was in mourning for the people of Creeslough, adding that people had been "shattered" by the tragedy.

"It is absolutely devastating and quite shocking in terms of the enormity of this tragedy, the scale of it. An explosion ripping through the normality of a community, with people going to the shop, the normal toing and froing of life," Martin told RTÉ Radio 1.

"Our sympathies and our hearts go out the families and friends of those who have lost their lives and those who have been injured and to the entire community."

The Taoiseach paid tribute to emergency services on both sides of the border who have participated in the rescue operation.

"We are in great debt of gratitude and we thank them for what they have done. The entire nation is mourning for the people of Creeslough this morning. I think everybody is shattered by the scale of this."

President of Ireland Michael D. Higgins described the tragedy as a "terrible blow" for the Creeslough community.

"May I, as president, express what I know will be the shock shared by all people throughout the country on learning of the terrible tragedy which has unfolded in Creeslough, Co Donegal," Higgins said.

"This tragedy is a terrible blow to a community that is closely knit and where every loss and injury will be felt by every member of the community and far beyond."

Sean Murphy, the hospital manager at Letterkenny University Hospital, said Friday was an "unbelievably tragic and sad day" for Creeslough and Donegal.

Murphy told RTÉ that a number of children were admitted to the hospital following the blast but did not go into further detail.