Adrian Flannelly, chairman and CEO of Irish Radio Network USA, is among the recipients of this year's Irish Presidential Distinguished Service Awards. 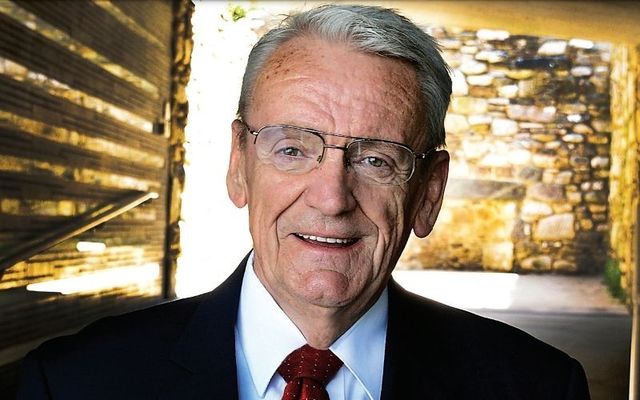 There have been few more deserving awardees of the most prestigious acknowledgment by the Irish government of the work of the Irish abroad.

For more than 50 years, Adrian Flannelly has been the voice of the Irish in New York and, indeed, far beyond in recent years as his weekly Saturday radio show created an online presence.

During that time, he has been at the center of every Irish issue that counted, a tireless worker for any and all things Irish.

Perhaps Flannelly will be most remembered for his extraordinary work on Irish immigration, being among the first to advocate that having so many Irish undocumented in the U.S. was the major crisis of its time for the Irish American community.

Back in the mid-1980s, a massive swell of young Irish began arriving in America, similar to waves of emigration before in the 1920s and 1950s.

The problem was these young Irish were undocumented. Many were forced into low-paying jobs and lived lives of fear that they would be jailed or deported.

Flannelly was a key figure in ensuring that the settled Irish community did its part, as it always had historically, in lending a helping hand.

He was to the forefront in creating the Donnelly and Morrison visa programs, called after the two Congressmen Brian Donnelly from Massachusetts and Bruce Morrison from Connecticut who pushed the bills through Congress.

Some 50,000 Irish would eventually be legalized, thanks in no small part to Flannelly’s radio show which gathered about 100,000 visa applications from Irish and delivered them to the post office destination outside Washington where they were processed.

Flannelly had one simple method in driving the visa effort -- keep talking and advocating for it repeatedly on his radio show that had a huge listenership.

His work on the visas made him known to many New York power figures, including Governor George Pataki who agreed, at Flannelly's urging, to create a memorial to Irish Famine victims on the New York City waterfront in sight of the Statue of Liberty.

Flannelly helped populate the site with grass, earth, and plants direct from his native Mayo as well as a replica of an Irish Famine dwelling, all within sight of Wall Street.

Obviously, there were many others who helped create the landmark, but it was Flannelly's dedication that made it possible.

He became the Irish representative for New York City Mayor Michael Bloomberg during his three terms in office and visited Ireland with him to unveil a statue to American Civil War hero General Michael Corcoran from Sligo which still stands proudly in Corcoran’s native area.

The New York Daily News called Flannelly the “dean of the Irish community” in the United States. He earned that title given that every Irish person who came to America selling a dream or seeking to share a heritage found a friendly venue atb his radio program to talk about their ventures.

Two years ago, Flannelly was inducted into Irish America magazine’s Hall of Fame, a worthy honor that won him many headlines back home in Mayo.

Now he is getting an overdue recognition from the Irish government. It is a fitting honor for a man who never turned away from an Irish cause, who along with his show producer Aine Sheridan has kept their Irish programs on the air through pandemic and deeply uncertain times.

But most of all, Flannelly deserves the honor for making sure no one Irish he met was a stranger in New York and helping worthy Irish causes in any way he could.

The award is well deserved and a fine acknowledgment by the Irish government.

*This editorial first appeared in the October 27 edition of the weekly Irish Voice newspaper, sister publication to IrishCentral.