While opposition grew on Thursday, local residents said they were willing to work to find a more agreeable plan for the proposed memorial adjacent to the Irish Hunger Memorial. 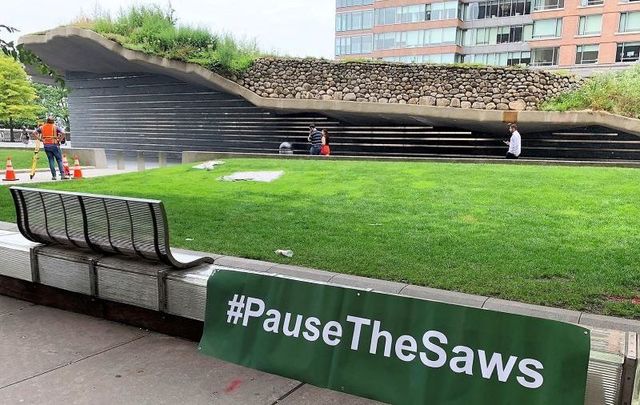 New York City politicians have joined the Irish American community and some local residents in opposition to the proposed Circle of Heroes essential workers memorial at a site adjacent to the Irish Hunger Memorial in Battery Park City in downtown NYC.

There are fears that the Irish Hunger Memorial will be encroached upon in some ways making it less visible and viable in light of the most recent renderings of the proposed new essential workers memorial.

However, the Battery Park City Neighborhood Association (BPCNA) late Thursday night released a statement which appeared to accept that if Governor Cuomo intended to build his essential workers memorial adjacent to the Irish Hunger Memorial, that discussions with Irish groups should take place to see if an accommodation could be worked out.

The essential workers memorial should be "cohesive, respectful and sensitive to the fact" that the Irish Hunger Memorial is so close, the BPCNA said in a letter issued to Governor Cuomo on Thursday.

(Interestingly, the association plea asking that the carbon-fueled flame that is part of the pandemic heroes remembrance not be used and that an eco-friendly alternative found takes up much more space in their list of priorities.)

Former congressman Joe Crowley who led the fight for the famine memorial when he was an assemblyman in Albany stated: "We should not pit one good cause against another. Our city is welcoming enough to memorialize the heroes of this pandemic and the heroes of Ireland who forged a new life against all odds in America."

Earlier on Thursday, councilmen Robert Holden and Daniel Dromm, both members of the NYC Council's Irish Caucus, and NY Congressman Jerry Nadler have also spoken out against the proposal to place the Circle of Heroes memorial for essential workers adjacent to the Irish Hunger Memorial.

On Wednesday night during a more than five-hour meeting between the Manhattan Community Board 1 (MCB1), the Battery Park City Authority (BPCA), and concerned locals who were mostly in opposition to the project proposal, it was confirmed that, following "public feedback," the two alternative sites are an area adjacent to the Irish Hunger Memorial and Esplanade Plaza. 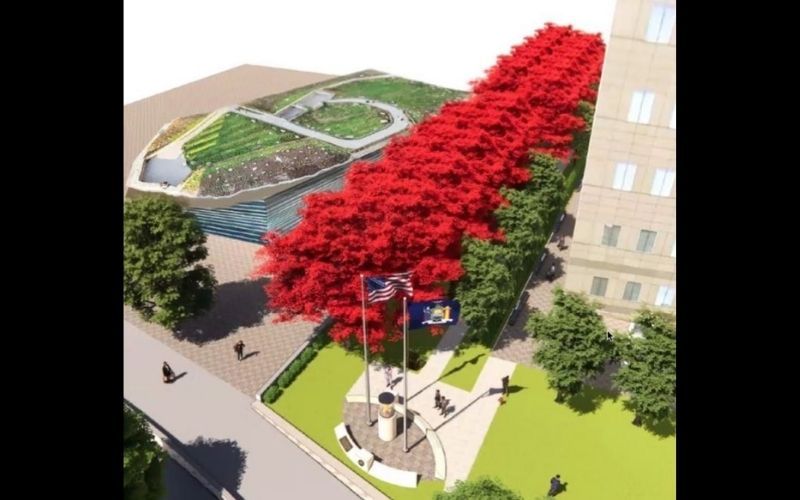 A rendering - which was said to be a "work in progress" - of the proposed site adjacent to the Irish Hunger Memorial.

Following Wednesday’s lengthy meeting that culminated in the draft of a resolution urging Cuomo to find another site, New York City politicians, as well as members of the Irish community, began to speak out.

NYC Councilman Robert Holden, referencing IrishCentral's coverage on the matter, said in a tweet on Thursday afternoon that New York's essential workers "deserve a lasting monument that is well planned and well placed, not one that is rushed and might take away from another nearby memorial."

Our essential workers deserve a lasting monument to their dedication that is well planned and well placed, not one that is rushed and might take away from another nearby memorial. This needs to be planned with input and engagement from the community.https://t.co/NgD4HtrYfk

After IrishCentral reached out to NYC Councilman Daniel Dromm, the chair of the NYC Council's Irish Caucus, Dromm said in a tweet that placing the essential workers memorial next to the Irish Hunger Memorial "is a bad idea."

Later, NY Congressman Jerry Nadler, quoting Dromm's tweet, also said that erecting the memorial at either the Irish Hunger Memorial or at the volleyball court in Esplanade Plaza, is a "bad idea."

We need a public, thoughtful process to design a monument that reflects the value of our brave essential workers. https://t.co/MqnUgDVR8T

Elsewhere, concerned Irish and Irish Americans continued to express their dismay in the face of the proposal.

Co Mayo native turned NYC resident Adrian Flannelly, the host of Irish Radio USA who serves as the Irish Cultural Liaison for the Irish Hunger Memorial, says he is disappointed to have not been consulted about the proposal and was not aware of Wednesday's meeting ahead of time.

“This is a surprise," Flannelly told IrishCentral on Thursday afternoon, noting that he had been fielding calls about the matter. "I think it [the proposal] was meant to slip in and get the diggers in.”

Flannelly is hopeful that he'll know more about the situation by Friday.

The AOH also expressed their opposition in a statement on Thursday afternoon that said in part that the proposal to build another memorial around the perimeter of the Irish Hunger Memorial “is disrespectful to the memory of the over one million people who perished and the over one million people who were forced to leave Ireland when ineptitude and remorselessness by the ruling British Government turned a crop failure into an unequaled humanitarian disaster.”

The AOH said that, according to the latest renderings, the Circle of Heroes memorial would “compromise the design of the monument to look out onto the waters that so many Irish men and women crossed at great peril to build a new life in America and the symbolism of the monument looking onto both the Statue of Liberty and Ellis Island.”

Irish American historian and lifelong Battery Park resident Kelly Anne Reynolds, who spoke during Wednesday's conference call, was at the Irish Hunger Memorial on Thursday where a sign with the saying "Pause the Saws," which originated amidst the pushback on the Rockefeller Park proposal, was displayed:

Notably, the pushback has not been exclusively from the Irish American community. Local residents are fiercely opposed to the proposal, arguing on Wednesday night's call that they were not consulted, that the project is being rushed, that the design is not fitting, and that the area is "overburdened" with memorials as it is.

After the comments from Holden, Dromm, and Nadler on Twitter, Governor Cuomo's office responded to a request from IrishCentral for a comment on the matter. The response, on behalf of George Tsunis, the chairman of the Battery Park City Authority who spoke at Wednesday night’s conference, said: “As planned, this week —and as recently as just last night—the Governor’s office and Battery Park City Authority have continued to hear from the community, take in feedback and make changes based on that feedback regarding the new essential worker monument scheduled for completion later this year.

“After many long and productive conversations, we are still so excited to celebrate and memorialize the essential workers here in Battery Park City.

"We look forward to sharing the updated plans for the monument."

It is understood that a rally may be held at the Irish Hunger Memorial in Battery Park on Monday, but that remains unconfirmed.