Bloomberg bid backed by leading Irish as he enters debates 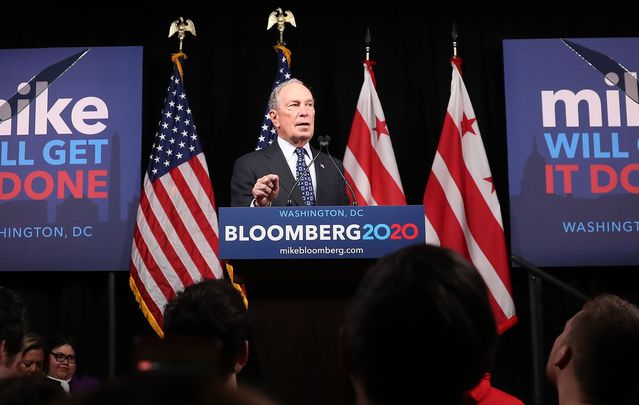 Michael Bloomberg’s chief Irish liaison during his 12 years as mayor of New York City says that the billionaire businessman would make an “outstanding” president of the United States, and be a firm supporter of the Irish and the issues that matter to them.

Meanwhile, Irish American Michael Bloomberg supporters from New York City and its boroughs, some of whom have worked in city government for various politicians, have formed a new group called NY Irish Americans for Mike Bloomberg 2020 to boost his bid for the Democratic presidential nomination (read more here).

Irish radio show host and community leader Adrian Flannelly told the Irish Voice that he is “fully supportive” of Bloomberg’s quest for the Democratic nomination.  Co. Mayo native Flannelly has been a friend of Bloomberg’s for decades and says he was a no-nonsense leader who also had a soft spot for the Irish.

“Mike embraced the Irish community and it was a real thing for him.  He wouldn’t attend an event, give some quick remarks and then look to leave quickly.  He enjoyed being in our company and he was a great friend of the Irish,” Flannelly said.

“We’ll be lucky to have him in the White House and I intend to do anything I can to support him.”

“Mike attended many United Irish Counties events, GAA events, and of course we had to have him come to the Mayo Society dance,” Flannelly says.  “And there was never a problem.  Meeting the Irish was something he always wanted to do.”
Bloomberg made several trips to Ireland during his time in office and after he left.  Flannelly was one of the organizers of a particularly memorable visit to Co. Sligo in 2006 when Bloomberg unveiled a memorial to New York’s Fighting 69th regiment and its commander, Brigadier Michael Corcoran, who was born in Sligo.  An avid flyer, Flannelly remembers that Bloomberg landed his plane at Knock Airport in Mayo.

“It was a short trip but a very memorable one that he enjoyed a lot,” he added.

Knock Airport was also on Bloomberg’s radar in 2007 when he traveled there to mark the start of new trans-Atlantic flights from New York to Knock by the budget airline Flyglobespan.

“Not only will these flights make it easier for Americans to get to the west of Ireland, it will enable even more Irish residents to visit New York. Thanks to the hard work of scores of people on both sides of the Atlantic, including Congressman Peter King, Deputy Mayor for Government Affairs Kevin Sheekey, as well as my good friend Adrian Flannelly, we were able to secure these important routes, and I look forward to landing on the runway myself next week,” Bloomberg said at the time.

Flannelly was also part of the Bloomberg delegation that traveled to Belfast in May of 2008 for the U.S.-Northern Ireland investment conference.  The mayor, Flannelly said, vowed to open an office of his Bloomberg News empire in Belfast and he kept to his word.

Read more: Joe Biden - a requiem for a political heavyweight?

“That’s the thing with Mike Bloomberg – he doesn’t just say things for the sake of it.  If he says he’s going to do something then he makes sure to get it done,” Flannelly added.

The Belfast trip also included a journey to Dublin for an invite that would have been hard to turn down – a gathering at Bono’s house.  “That was a good night that we all enjoyed very much,” Flannelly recalls.

Bloomberg was a participant in several New York St. Patrick’s Day parades, including the annual St. Pat’s for All march in Queens and the parade on Fifth Avenue.  The exclusion of gay groups on Fifth was troublesome, he said in 2011.

"I feel very strongly these parades should be open to everyone," he told the media. "My job as mayor, nevertheless, is to attend these parades, and I will continue to attend them, at the same time, while I am working as hard as I can to get the parade organizers to change.”

Bloomberg’s first post-parade stop for 12 years was to Flannelly’s broadcast studio for a live interview.  “He never missed a year,” Flannelly says.

“It’s funny, he would come in after the march very casually, grab a sandwich and talk with the other guests, pose for photos.  He was in no rush at all.  And then he’d sit at the microphone with his food and we’d just start talking.”

Bloomberg’s strong stance on immigration reform should register with Irish American voters, Flannelly says.  “He’s been talking about this for years, and was talking about it right after 9-11 when none of the other candidates for mayor were,” he adds.

“Mike knows the importance of immigrants to the country and he’s going to fight for fair reform, and that can only benefit the Irish.”

Flannelly has been in touch with members of the Bloomberg team, including his old friend Kevin Sheekey who is the campaign manager.   “Mike is surrounded by great people which isn’t surprising at all.  That’s how he works,” Flannelly says.

“So I’m very much looking forward to the next few weeks and ready to do whatever is necessary to help Mike win the nomination, and then the White House.”

Irish American Michael Bloomberg supporters from New York City and its boroughs, some of whom have worked in city government for various politicians, have formed a new group called NY Irish Americans for Mike Bloomberg 2020 to boost his bid for the Democratic presidential nomination.

The group was due to have its first organizational meeting on Tuesday night, February 19, and communications director Carolyn Daly says members are eager for the whole of America to realize what New Yorkers already know about Bloomberg.

“He was a great mayor.  He was a true innovator and a proven leader who brings people together.  He has guts, and he’s not afraid to take on the current occupant of the White House,” Daly told the Irish Voice.

The new Bloomberg group is stressing what Daly calls the three “Es” – economy, education and environment, issues that Bloomberg has focused on both as mayor and through his philanthropic work.

“We identify as moderate Democrats,” Daly says.  “And that is what Michael Bloomberg is.”

The group plans on further outreach through Facebook and wants all to feel welcome to join, even those who aren’t Irish.

“The most important thing is to support Mayor Bloomberg.  We are open and happy to welcome all,” Daly said.