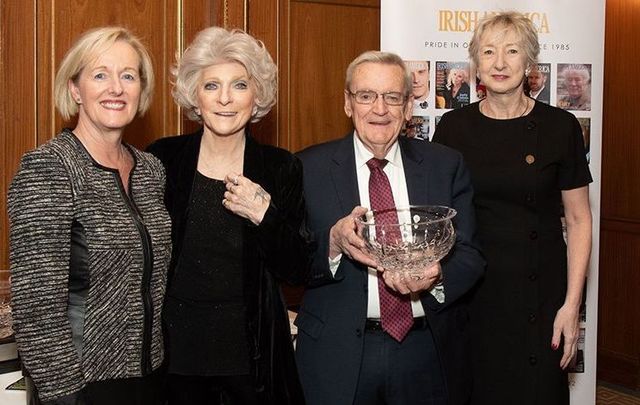 This year, the Irish America Hall of Fame 2019, was at the Pierre Hotel on Fifth Avenue in New York on Thursday, March 15, kicking off a wonderful afternoon of fun with the legendary singer Judy Collins singing about emigration and then giving guests a soaring version of “Danny Boy.”

Taking to the stage straight after was a musician of a different stripe, Arturo O’Farrill, six-time Grammy-Award-winner and one of the greatest exponents of Afro-Latin jazz.

He played a beautiful meandering version of “Danny Boy” on the piano and explained his Irish roots went back to Don Ricardo O’Farrill Daly who arrived in Cuba in the early 1700s.

O’Farrill has been America’s de facto cultural ambassador to Cuba since 2002, and he brought that love of Ireland (Co Longford) and Cuba into his playing.

The next honoree is a friend of 25 years, Irish radio host Adrian Flannelly from Mayo, who has been running his show for an incredible 50 years.

It is an extraordinary accomplishment, beginning in 1969. Adrian has interviewed every shade of political icon, actors, jokesters (most notably the McCourt boys), singers and community leaders.

Through it all, Adrian maintains order (barely at times). and he and wife Aine Sheridan from Longford have become two of the most beloved Irish hosts in America. All I can imagine is what treasures those 50-year archives hold, especially Adrian’s stellar work on legalizing the Irish undocumented.

Next up was a very formidable figure indeed, NYPD Commissioner James O’Neill, whose folks also have a Longford connection. He oversees 54,000 men and women who form New York's long blue line, and O’Neill has continued to bring down crime and make the streets safer in dramatic fashion.

“I certainly wouldn’t be standing up here if it wasn’t for the 54,000 men and women of the New York City Police Department, and the thousands of people that have come before us. NYC was transformed, and it wasn’t transformed by magic.” ––James O'Neill #IAHallofFame @NYPDONeill pic.twitter.com/WTaq9COE1n

How good is he? He is the first Chief of Department (uniformed officer) to make it to Commissioner in 40 years. Adding to his pride was the presence of his mother and sister at his induction.

There was huge applause for Ciaran O’Reilly and Charlotte Moore, who have made their Irish Repertory Theater into the most renowned Irish theater company in the U.S. From very modest beginnings to the wonderful refurbished theater they have now, Ciaran and Charlotte continue to serve as an inspiration to a new generation.  Charlotte, whose Irish ancestors came from Wexford was delighted to learn that the Irish America Hall of Fame is located there.

"My ancestors left with little in their pockets, but their blood was plush with heritage. It has been a privilege to honor the heritage of a country that’s produced the finest playwrights in any language.” ––Charlotte Moore #IAHallofFame @IrishRep pic.twitter.com/D2pedKSOW1

Up next was the civil rights lawyer and Irish activist, John Dearie, a highly successful attorney and former Notre Dame basketball stand-out who was at long last getting recognition for a lifetime dedicated to Irish ideals, and also pulling a masterstroke which got Bill Clinton involved in the Irish peace process.

Dearie founded the Irish American Presidential Forums, the first of which Clinton attended and gave his fateful support for a visa for Gerry Adams and a special envoy (think George Mitchell) for Northern Ireland if he won the White House.

John Dearie called on the Irish presence in America to be more involved in peace in Northern Ireland, immigration, the McGuinness Principles, Brexit and what it means for the Good Friday Agreement. "Our challenge is to get activation and motivation.” #IAHallofFame @JohnCDearieLaw pic.twitter.com/V7RPv8qiH0

Last up, but definitely not least, was Oscar-winning director and screenwriter Terry George. The Belfast native has a life story that would make a great movie itself.

He fled Belfast after being jailed for Republican activity. In New York he worked as a barman, fact checker, music critic – he was the first music columnist for the Irish Voice - until he wrote a smash hit play called The Tunnel that launched him on his film career.

“This is the land of hope, the land of dreamers. I couldn’t even have dreamed the possibility of this. Clearly, my mother didn’t when she said I should get another job." ––Terry George #IAHallofFame pic.twitter.com/v6SJePezYp

"Hotel Rwanda," "In the Name of the Father," "The Boxer," "Some Mother’s Son" and more recently "The Promise" about the Armenian genocide are just some of Terry’s credits. A lifetime of accomplishment from unbelievably tough beginnings.

Which is true of the Irish in America anyway. This year’s Hall of Fame 2019 embodied the very best of who and what we are.

Who would you love to see inducted to the Irish America Hall of Fame? Let us know in the comments section, below.