Ireland’s new Fungie? Public warned to stay away from Wally the Walrus

Wally the Walrus has been spotted around Co Cork in the south of Ireland after earlier appearing off the coast of Co Kerry in March. 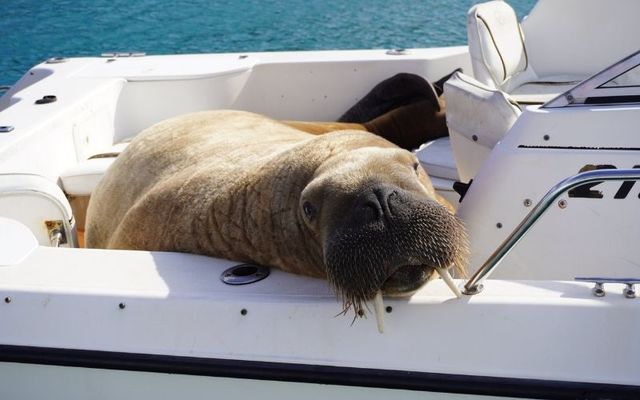 People in Cork have been warned to stay away from an Arctic walrus who was spotted relaxing on a boat in West Cork.

The walrus, who has been named Wally, was first spotted resting on a rock on Valentia Island in Co Kerry in March.

He has since then traveled about 2,500 miles (4,000km) along the coast of western Europe, including Sapin, France and the UK before returning to Ardmore in Co Waterford where he caused a scene and climbed in to a boat.

Wally is identifiable due to the distinctive white blotches on his left flipper and some scientists believe he fell asleep on a floating sheet of ice before waking up and finding himself far from home.

The adventurous walrus has now arrived in West Cork after being spotted in a boat belonging to a member of Clonakilty Distillery.

One of our team had an unexpected Artic visitor on their boat this evening. #Wallythewalrus spotted in Clonakilty today.... we reckon he must have stopped by on his travels for a refreshing Minke G&T. ??#clonakilty #wildatlanticway #purecork pic.twitter.com/zGH8vGqotB

Though he may seem playful and may remind people of the famous Fungie the Dolphin who disappeared from the Dingle Peninsula, Seal Rescue Ireland has appealed to the public to respect the walrus’s space and not to go close to him.

"Although these images have a comic quality to them, there is a serious side to this, as this animal is a long way from home and we’ve no way of knowing whether it is stressed, and how it may react to stressful situations,” he said.

"So we’d ask everyone who wants to see this rare Arctic visitor to respect its space, as it’s important that we come out the other end of this episode without injury to people or animal - even if we can’t guarantee he won’t sink a few boats.

#WalrusWatch and EMERGENCY Appeal: We are looking for a pontoon/floating platform as a safe haul-out site for the Walrus, so that he can be effectively monitored, protected from disturbance, and damage to property prevented.

Professor Emer Rogan of the School of Biological, Earth and Environmental Science at University College Cork (UCC) said Wally appears not yet to be fully grown.

“Males tend to be much bigger but it’s difficult to say whether this animal is a male or a female – what’s clear is that its tusks are still relatively short suggesting that it is not fully grown but it still looks like a large animal and people need to respect it and give it the space it needs."