The arctic walrus, who is thought to be quite young, was in an exhausted state on Sunday after its journey from Greenland to Ireland. 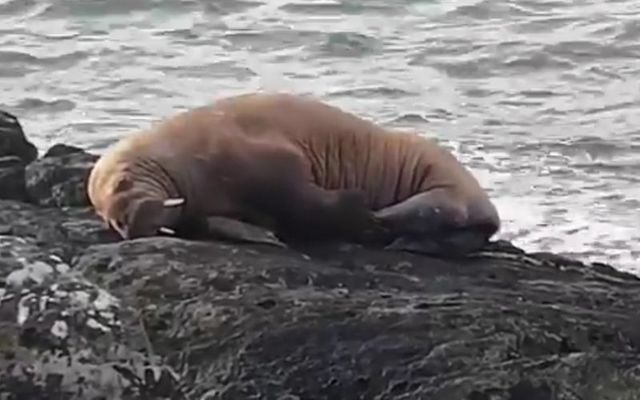 Kevin Flannery of Dingle Oceanworld Aquarium said that it was the first confirmed sighting of a walrus in Irish waters. Seán Mac an tSíthigh, Twitter

An arctic walrus was spotted on an Irish island off the coast of Kerry on March 14 after it drifted into Irish waters from Greenland.

Alan Houlihan and his five-year-old daughter Muireann spotted the walrus on Valentia Island off the Dingle Peninsula in Co Kerry as they walked along Glanleam Beach on Sunday morning.

The walrus is believed to be quite young since its tusks are just 30cm long and the animal was in an exhausted state on Sunday when Houlihan first spotted it.

Houlihan said that there was no sign of the walrus on Monday morning and said that he had never seen anything like it in Irish waters before.

He said that the animal was roughly the same size as a bull or a cow.

"I thought it was a seal at first and then we saw the tusks. He kind of jumped up on the rocks. He was massive. He was about the size of a bull or a cow, pretty similar in size, he’s big, big," Houlihan said.

An Arctic Walrus has landed on Valentia Island... believed to have made its way all the way from Greenland! It appears to be exhausted. Video by Alan Houlihan, who’s 5 year old daughter was the first to spot the walrus. #Kerry pic.twitter.com/TLtBLBAZDk

Kevin Flannery of Dingle Oceanworld Aquarium said that the walrus should be left alone to regain its strength.

"Hopefully then, he can make his way home himself," Flannery said.

Flannery said that it was likely that the walrus was asleep on an iceberg that melted off the Greenland shelf and that the animal may have drifted across the Gulf Stream before ending up on Valentia Island.

He said that this was the first confirmed sighting of a Walrus in Irish waters and said that the incident was a "one-off".

Surfers in Donegal also reported seeing a pair of walruses in 1999, while a walrus washed ashore on Brandy Hall Beach in Berehaven in October 1930.